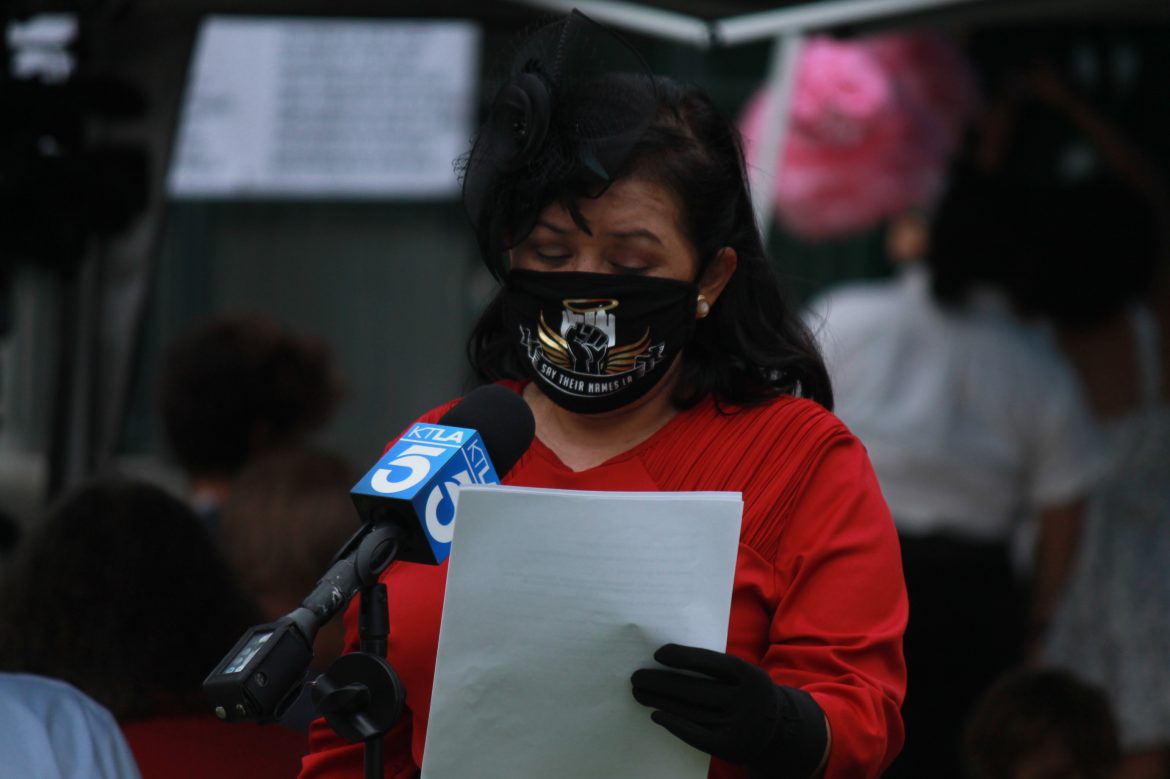 Community members gathered to hear family and friends of Marquez speak alongside families of victims of police brutality.

Nearly three years after the murder of Vanessa Marquez, Black Lives Matter South Pasadena and Say Their Names Los Angeles held a celebration of life for the late actress on Sunday, Aug. 22. Attendees dressed in 1940’s attire to honor Marquez’s love of classic films, gathered by the Gold Line Metro Station on Mission St. to learn more about Marquez and other families who have been impacted by police brutality.

Marquez was shot and killed by SPPD officers during a wellness check in August of 2018. Following a $20 million dollar wrongful death lawsuit filed against the city by Marquez’s mother, the city reached a settlement of $450,00 in February of 2021. At the event, Minerva Garcia, one of Marquez’s close friends and an integral organizer of the event, read the report that Marquez’s mother filed against the city.

The third “angelversary” or Marquez’s death not only highlighted the moments that led up to her death, but gave other families a chance to do the same. Affected families took turns telling stories of those they had lost and how they lost them as this was as much a celebration of life as it was a call to action.

Many brought signs reading “Black Lives Matter” and “Defund The Police” to display to passing cars or hold on their laps for others to see during the service. Their emotion and support was vocalized throughout the hours.

“Through my time of coming out and protesting, I’ve befriended my fellow protesters and regard them as real dear comrades. Just the feeling of standing for something more than just my daily life [and] being a part of something greater, something that is going to ensure justice for families, for people everywhere, motivates me to come out,” a representative of Say Their Names said.

Amongst the crowd was the brother and father of Mely Corado. Corado was murdered in 2018, when she was caught in crossfires between a suspect and police at a Trader Joe’s in Silverlake.

Corado’s family expressed that they attended the celebration of life on behalf of victim’s families who couldn’t bring themselves to do so. Albert Corado, Corado’s brother, said that this was collectively not only an opportunity to lift up the names of those they’d lost, but to give a name to the people who committed these crimes.

The aunt of Anthony Vargas, another victim of police brutality also spoke. Vargas was killed in 2018 and his family has been protesting on his behalf, ensuring that people know his name. She made her intentions clear, wanting to share who her nephew was, who he wasn’t, and specifically identify who was responsible for his death.

The space was decorated with a display of flowers and photographs as well as an altar and monitor for Vanessa’s tribute that Classroom Of Compassion, a Los Angeles based non-profit organization that dedicates artwork to communities facing hardship, contributed.

Live music also played a part in the event with a local musician singing and playing guitar to Marquez’s favorite song, “Somewhere Over The Rainbow”. The service ended with a video tribute to Marquez, broadcasting old footage of her. From detailing her Star Wars obsession years back to her best moments on screen, closed by the words “In Loving Memory Of Vanessa Rosalia Marquez (1968-2018).”