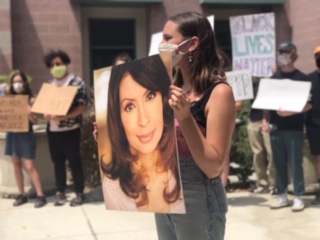 Local protesters gathered in front of city hall to honor Marquez and demand that the officers involved in her death be held accountable.

The family of late actress Vanessa Marquez announced that a civil rights lawsuit was filed over her 2018 killing by SPPD officers on Wednesday, June 24. The family demanded that the police officers involved be reinvestigated and held accountable for her death.

The civil rights lawsuit filed in California superior court follows a $20 million wrongful death claim made by Marquez’s mother, Delia McElfresh, in Feb. 2019, which the City of South Pasadena did not respond to.

The lawsuit claimed that police officers should not have been dispatched to Marquez’s apartment in response to a mental health call because her friend who called 911 had specifically asked for the fire department or paramedics. Marquez’s family argued that the police violated her fourth amendment right of protection against “unreasonable search and seizures” because officers entered her residence without permission.

“Vanessa did not consent to the entry into her home. That was even clear in [the SPPD’s] own narrative,” McElfresh’s attorney Vicki Sarmiento said. “They entered her home without her consent. Imagine you’re in your bed suffering from seizures and you have armed officers in your home and entering your bedroom.”

Officers then used a 5150 clause under the Welfare and Institutions Code, which is implemented if an individual is a danger to themselves or others, to allegedly force Marquez to go to the hospital after they discovered her having a seizure. Once she regained consciousness, Marquez responded to the officers’ questions. Sarmiento claims that Marquez’s cooperation did not fit the behavioral requirements of a 5150 declaration.

Sarmiento insisted that she would call for a deeper investigation into how the decision to use a 5150 was made.

“And at that point before anybody, a clinician or anyone with authority, makes the determinitaion that she should be removed by the Welfare and Institution Code 5150, the officers decide that she should be removed,” Sarmiento said. “Now that’s going to be explored. How did that all of a sudden come about? How did it all come about when they’re trying to convince her to go to the hospital, and now she’s not going because she has a right to refuse, this turns into a 5150 determination.”

When police officers allegedly forced Marquez to go to the hospital, she was spotted with an object in her hand that would later be identified as a replica gun before officers fired multiple shots, killing her. The L.A. District Attorney’s Office declined to file charges against the two officers involved after conducting their own investigation and reviewing body camera footage, ruling that they acted in self-defense.

Protesters affiliated with the South Pasadena Youth for Police Reform activist group and Marquez’s fellow actors from the movie Stand and Deliver attended the press conference in front of city hall to raise awareness for her case and the importance of treating mental health issues appropriately. A group of about 30 people attended the event and chanted “Say her name, Vanessa Marquez” in support.

“For me, being here today was an opportunity to shed light on this debt that the City of South Pasadena owes, and that is the debt of a life, Vanessa’s life, she was robbed of that. If you know Vanessa, she had the sweetest, kindest, smallest little voice, and that got robbed and taken away from her,” Marquez’s co-star Patrick Baca said. “So we’re here as her friends, her family, her cast mates to restore that voice[…] and her dignity and respect.”

The City and SPPD responded to Tiger’s request for comment by saying that they had not been served with the lawsuit and had not seen a copy, and thus could not speak on the case. After the lawsuit is formally served on the City, it will have 30 days to file a written response in court.