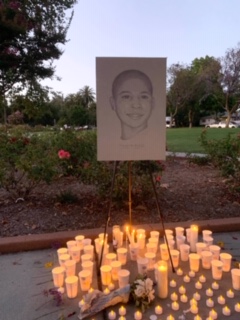 SPY4PR hoped that the vigil acted to not only honor Tamir Rice, but also to inspire community members to demand local government action.

Community members showed up to commemorate Tamir Rice at sunset and many placed candles and flowers around a drawing of Rice after the service. Local youth were attracted to the vigil and Rice’s story after learning about how young he was when he was killed.

“I feel a personal connection to Tamir Rice because him and I share the same birthday,” SPHS rising senior Tonalli Garcia-Rodriguez said. “He was only a year older than me. That made it very apparent how our lives were very different… He was so young when he died and what happened to him was unjust.”

Rice, a 12 year-old Black boy from Ohio, was playing with a toy gun when police officer Timothy Loehmann shot and killed him in 2014. Although Loehmann was fired two and a half years later, he has yet to face charges.

Outrage over the murder of Tamir Rice fueled the Black Lives Matter (BLM) movement in its early days and as BLM protests have erupted across the nation following the killing of George Floyd, Rice’s case is being brought into the public eye once again.

“Tamir would have been 18 today,” Ben Carlton, a guest speaker and co-founder of BMe Community, a non-profit that trains companies on how to be more inclusive and diverse, said. “Tamir should be here today. I could go on and on with more stories about how lives have been lost to this form of domestic terrorism. I could go on and on about how many souls we have failed as a nation.”

SPY4PR coordinated the vigil not only to honor Tamir Rice, but also to invite other cities around South Pasadena to hold their own governments accountable. The activist group has also led protests on Mission Street and in front of city hall to demand that the city government adopt its list of 21 demands that focus on defunding and reforming the SPPD.

SPY4PR will continue its efforts to enact change by hosting a food drive with the non-profit Influence Change L.A. in remembrance of 19 year-old activist Toyin Salau on Wednesday, July 1 from 1 p.m. to 6 p.m. The group will also lead a march starting at Garfield Park and along Mission Street to support vulnerable homeless youth like Salau at 3 p.m., the same day.

Pete Davidson gets candid in The King of Staten Island

An excellent and informative article.