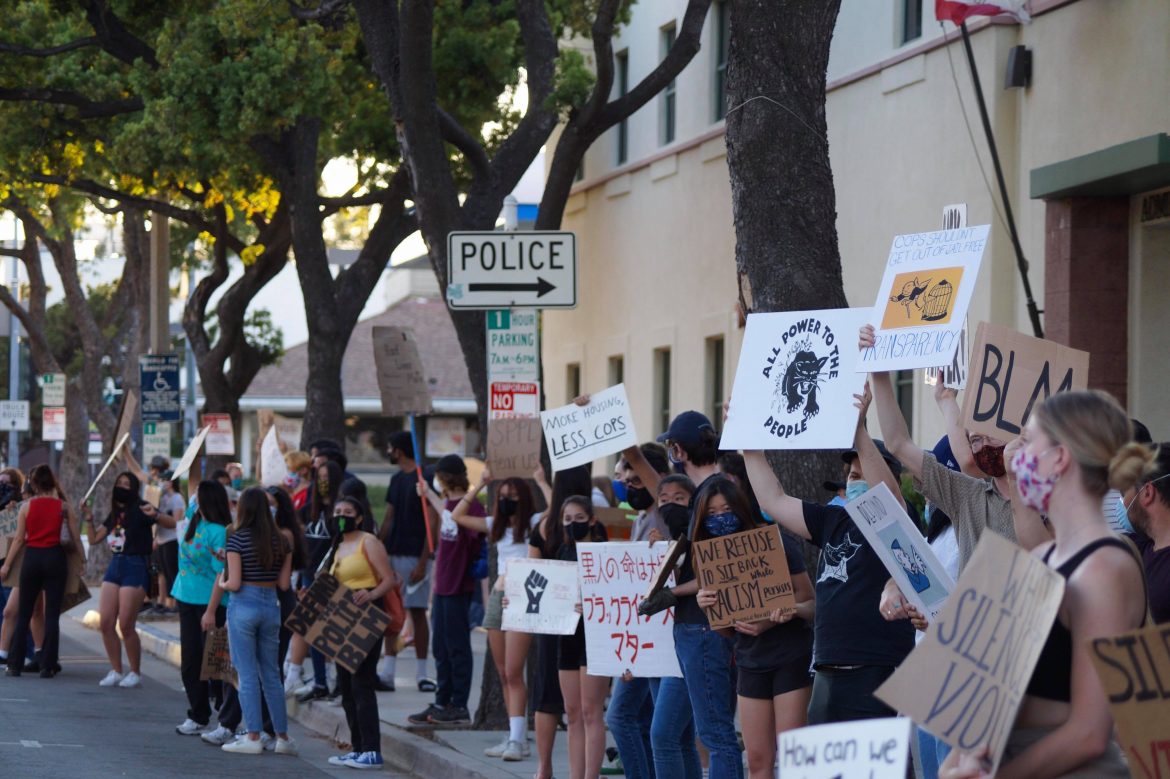 South Pasadena Youth For Police Reform (SPY4PR) organized a City Hall protest calling for the City Council to significantly reform the SPPD, at 6 p.m. on Wednesday, June 10. Over a hundred residents congregated outside the chambers where local leaders engaged in closed session labor negotiations with the South Pasadena Police Officers’ Association.

Recordings of Martin Luther King Jr. speeches and music filled Mission Street as people gathered along the sidewalks with various Black Lives Matter signs. The protest was unprecedented in its size, helping to garner increased local awareness built up from the smaller protests in the past week.

The City received backlash about its proposed SPPD budget of almost $10 million, when residents had allocated it only $6 million in a community outreach survey. Many of the younger demonstrators joined a growing chorus of people calling for a reallocation of police funds to other community-building programs.

“I’m hoping to defund the police and put it more into the community so that there’s less crime,” recent SPHS graduate Cat Juliet said. “Because if we divvy up the police into different departments like sex trafficking, or domestic violence, it’ll be more effective than just one big department that’s just going crazy with too much money.”

The SPPD spends much of its resources on homeless and mental health outreach, which protestors have pointed out is not the most effective and safe way to deal with those issues.

“I hope that the city council reviews the budget that they are looking at tonight and finds ways to redirect police funding to resources that can help solve problems that the police usually have to be sent out to deal with, that don’t really fall under their purview,” resident Peter McDonell noted.

After 40 minutes, protestors moved into the middle of the street, chanting “no justice, no peace” and “hands up don’t shoot,” while police cruisers blocked off traffic at the adjacent intersections.

SPHS alumnus and protest organizer Brandon Yung delivered a speech highlighting SPY4PR’s three primary demands: greater transparency within the SPPD, reformation of SPPD’s de-escalation and use of force policy manual, and the creation of an independent civilian oversight commission to investigate police misconduct.

“Our public safety commission has repeatedly, in the past, asked for instances of documents, body cameras, and police reports. The city manager every single time says that it is not in the scope of your charter,” Yung said. “We will either be asking that the City Council amend this charter to make it so our public safety committee has the power to look into officer misconduct, or we will be creating a ballot initiative in November to change the charter of this city.”

For some attendees, the protests touched on both a personal and political note, helping find hope through the rise in activism today.

“I’m a Sri Lankan. I came here 12 years ago. I was in Maryland. You don’t see a lot of people of color there and they put me down sometimes,” community member Harsha Weerasingha said. “I got arrested one time and the cops, they put me in jail … but I didn’t do anything wrong. I realized how cruel the police are. Not all police members are cruel but some officers try to get you no matter what. They want to put you in jail. You can see a lot of youth coming out here, participating in this event, and when you see the news, you can see a lot of people gathering in peaceful protests. It’s encouraging that all these youth come out here and represent who they are.”

The continuous protests and push against the city has already resulted in the School Board banning the use of drug dogs in SPUSD at its meeting on Tuesday, June 9. SPY4PR founder London Lang, has risen as the spokesperson, inspiring young adults to be activists.

“The protests at Fair Oaks and Mission have been successful and many have come. Turnout has been great and it has always grown every single day,” Lang said. “We will do this every month that we need to until this city can be as good as it needs to be and encourage other cities to be as great as it is.”

Lang and SPY4PR plan to continue the daily BLM protests at the intersection of Fair Oaks and Mission at 12:00 p.m. the rest of the week.