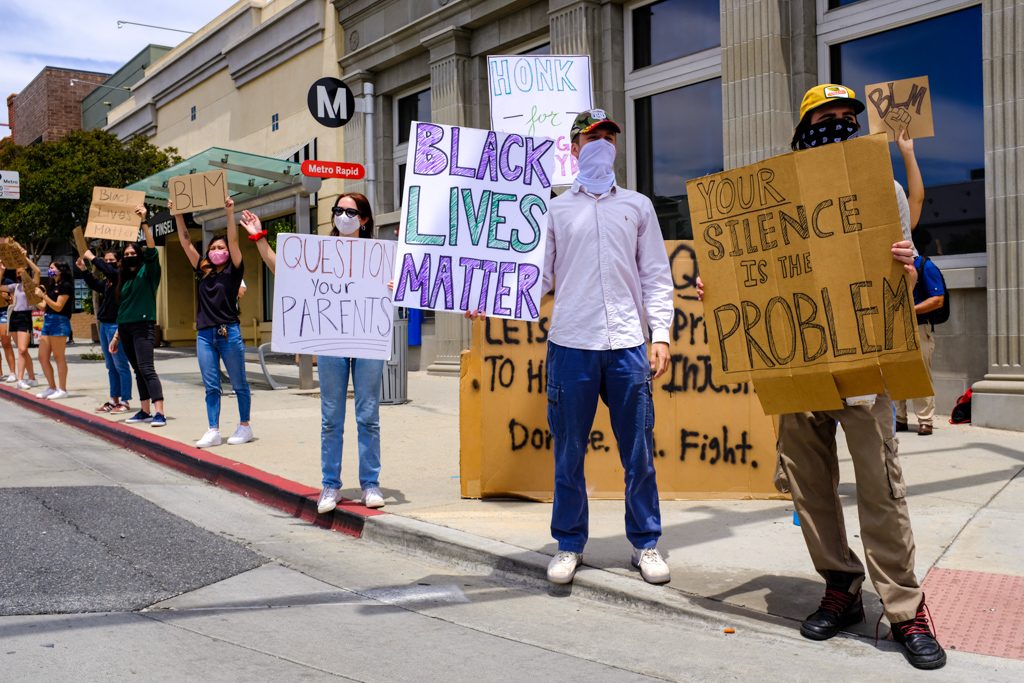 Protestors held signs to the street at the intersection of Fair Oaks and Mission in support of the Black Lives Matter movement.

Dozens of South Pasadena residents rallied together at the intersection of Fair Oaks and Mission to protest the killing of George Floyd and support the Black Lives Matter movement.

The protest was originally organized by South Pasadena natives London Lang, Thomas Forman, Hank Rainey, and Lachlan Campbell. They were joined by other SPHS alumni and activists who came in support of the Black Lives Matter movement. Cars passed, honking in agreement as protestors held up signs while still practicing social distancing and wearing masks.

Lang attended Black Lives Matter protests in L.A. earlier in the week. During the protests, Lang’s sister was shot with rubber bullets, resulting in hospitalization for three days. Additionally, a photo of Lang was included in a now deleted Facebook post that had racially profiled him by expressing stress and concern about a violent protest in South Pasadena. Despite this, Lang pushed forward in an effort to create positive change.

“I personally love the people who came to attack me on social media. I love them to death. I love them forever and ever and I won’t stop loving them,” Lang said. “I said you know what, I’ve got to make it right for me, for everyone who has seen me and I want to help others and inspire others.”

Although Lang noted that the South Pasadena Police Department has done a primarily upstanding job at open communication and respect for all citizens, he hopes the protests will raise awareness and allow individuals to speak their minds.

Many locals also came out to protest against the upcoming city budget’s increased funding towards the police department and the decreased funding the of community services.

“We call ourselves a liberal community but any activism has stayed online,” Forman. “My aim is to make people put their money where their mouth is and go farther than being online. The next move is to mobilize getting SPHS alumni to sign an open letter basically saying that we’re not okay with that allocation of funds.”

“If you want to start protesting, I’d suggest get some duct tape on some sidewalks and socially distance everyone so [the coronavirus] doesn’t get passed around too easily.” Lang said. “Keep all crosswalks open and talk to the businesses before you put down the tape so you know what they need and they know you can keep them safe. Businesses are crucial.”

Souplantation’s closure marks the end of a cross country tradition