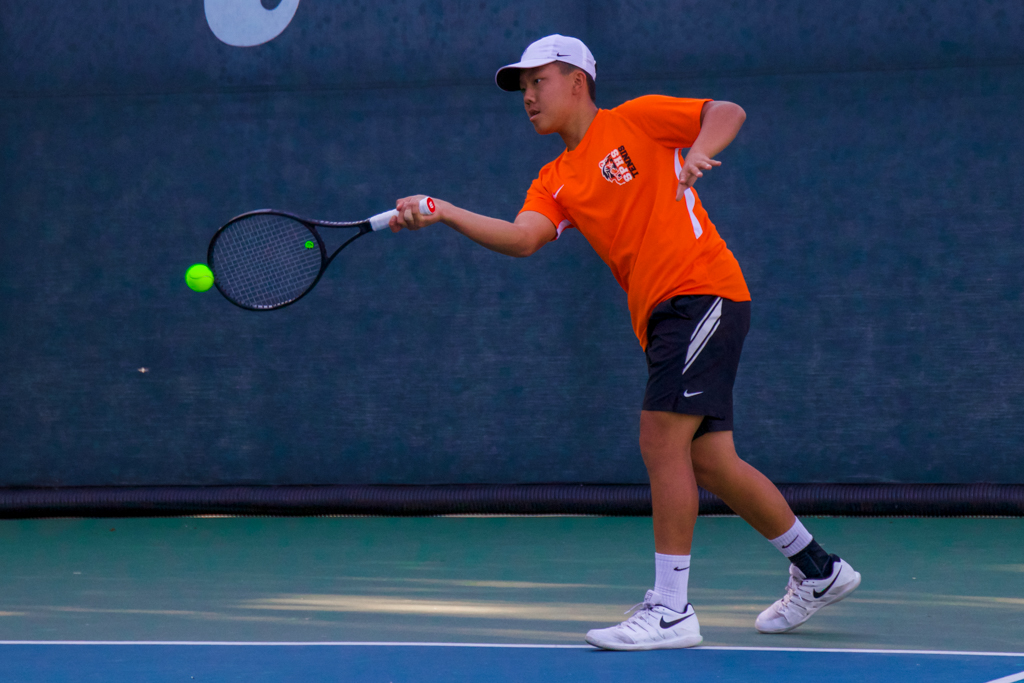 The boys tennis team currently stand 0-3 in the Rio Hondo League (RHL) and looks to compete in the RHL Preliminaries on Wednesday, May 5.

After taking a year-long pause in athletic competitions due to coronavirus, winter and spring sports were unsure of the future of their seasons. As restrictions have eased, South Pasadena High School sports teams have returned cautiously, but with full force. Tiger’s writers checked in on a few of season two sports’ progress during their condensed season.

Boys soccer is still on the hunt for the Rio Hondo League title, as their record currently lies at 3-2-1. A rough past few games against Temple City and Monrovia have shown that improved communication is vital to mend their struggling offensive line. Senior captain Caleb Lee anchors the team with his key scoring as a forward, which helps maintain their average three goals per game. The Tigers have three remaining games in the shortened season and they have the opportunity to earn revenge on previously lost and tied games against Temple City, Monrovia, and La Cañada.

Girls soccer is performing better than they have in previous years due to new coaching staff and an influx in underclassmen players, which now make up half of the 23 person team. The team currently ranks second in the Rio Hondo League with four wins, zero losses, and two draws. With help from senior goalkeeper Andrea Zarazua, the Tigers have been able to hold a strong defensive unit that has only conceded three goals through six games. The future looks bright for the team as they plan to play two more league matches, and hopefully finish off the season undefeated

After squeezing out a 4-3 win against San Marino in the final inning, baseball sits in fourth place in the Rio Hondo League halfway through the year. In their three regular season losses, South Pas has only lagged behind by a two-run average, and even took La Cañada to eight innings; unlike previous years, baseball has been competitive in losses. A tough schedule riddled with stiff competition lies ahead, but if the Tigers can ride the momentum of that big rival win, they could finally rise from the RHL cellar for the first time since 2013.

Softball began the season with a rocky start, and as the season progresses, their dwindling performance has left them at a 0-5 standing in league. The team was faced with few returning starters, some of which include senior third baseman Carissa Park. Still, some promising young prospects have emerged — freshman Danica Sterling displayed skill in her performance against San Marino. With an inexperienced team, the Tigers are left with ample time for improvement and hope to build a strong winning culture for future seasons.

Boys tennis started the season out slow with a 16-2 loss against both La Cañada and Temple City. However, they managed to straighten up their game with two 13-5 victories against Maranatha Village Christain in two non-league games. The Tigers defeated San Marino in their final league match, concluding their season with a final record of 1-2 in league and 3-2 overall. Sophomore singles player Finn McMillian was a bright spot, building on his short success as a freshman last season and performing well during matches.

Girls tennis concluded the year with a final record of 1-2-0. The season was filled with up and down extremes. South Pas defeated Temple City, 16-2, at home, but fell with the exact same score to La Cañada and San Marino. Though the season was short-lived, a few players sustained an impressive performance: Juniors and doubles players Ava Feldman and Stephanie Li showcased their prowess and displayed strong performances at the net. Feldman and Li will return next year to lead back to Rio Hondo League dominance.

Boys golf has made the most out of a short season. They had a trying start when they lost their first match against long- standing rival, San Marino, but quickly picked up the pace. Defeating its opponents in the next two matches, each by a considerably wide margin, the team has secured a current record of 2-1 and hope to maintain that streak at their upcoming games in the next two weeks. Led by senior Justin Toshima, the boys golf team hopes to finish strong at the league finals in May.

This season has been momentous for the girls golf team, currently standing at a 2-0 record. The most notable match as of yet is the team’s win against San Marino by a narrow five-stroke margin, marking the first victory against SPHS’s rival in three years. The Tigers successful season has gotten the attention of several colleges, as many are reaching out to key players like junior Lauren Calderon. Ideally, the team will continue their winning streak through the Rio Hondo League Finals in May, although the event is still up in the air