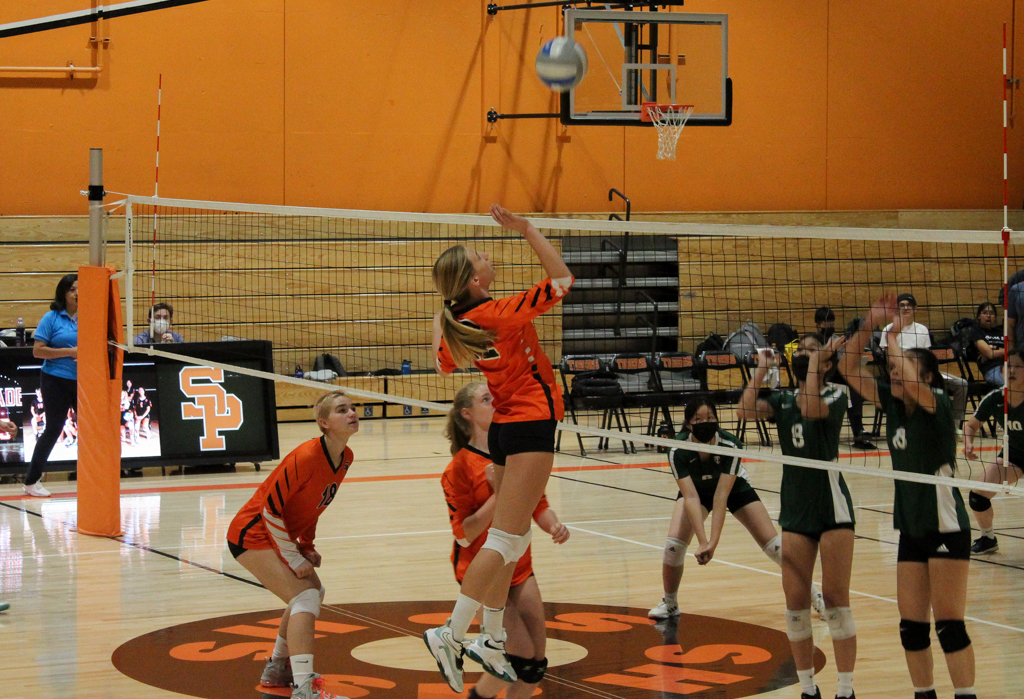 Outplaying the Rams in all three sets, volleyball surged to a league victory over Temple City.

Girls volleyball knocked out the Temple City Rams in three sets on Tuesday, Sep. 27. After finishing every set with a 10-point lead, the Tigers secured an uncontested 3-0 win to add to their early 5-1 record in the RHL.

A strong serve from the Rams put the ball into play. After a stretched-out rally, junior opposite hitter Ingrid Zahn spiked the ball straight down the net to clock a 1-0 lead for the home team. Junior setter Kendall Taylor saw the opportunity to sail an array of consistent serves and an ace. Junior outside hitter Helena Foord worked in tandem with Zahn at the front to pick up an early Tigers lead.

Despite their efforts, the Rams could not hold off the Tigers’ momentum. While their serves were powerful, communication ran short circuit. The opponents’ attacks rarely impacted the scoreboard. Spikes that flew over the net frequently went out of bound.

The Rams fought to delay the Tiger victory. With the Tigers leading 24-15, the opponents remained hopeful. Each attacking combination inspired cheers from the Rams’ sideliners. Despite the combined efforts of the visiting team at large, their fight was short-lived. The first set went 25-15 to the Tigers.

By the second set, the Tigers had gauged their opponents’ skill level. A tip from Zahn put the Tigers ahead 1-0. Junior outside and opposite hitter Jenna Garner was a constant presence on the offensive. Sophomore setters Jolene Wu and Reese Buckley found themselves on the court in lieu of the starter Taylor and dealt considerable damage to the weakened Rams defense. Sophomore libero Ava Conti was crucial in sustaining rallies. The triad of sophomores caught the Rams off guard, putting up a 12-point lead before the opponents retreated into time-out.

The buzzer called the teams back to starting positions. Registering the severity of the 18-5 South Pas lead, Temple City upped the power of their attacks. South Pas let a few points slip through before taking back the offensive to close the second set leading 25-16.

The Rams grew their team cohesion as their newly-discovered competitive streak continued into the third set. A strong spike awarded the opponents with the first point of the match, quickly followed by a second and third.

As the rallies intensified, South Pas made a series of substitutions to return to their original starting lineup. Junior libero Mia Ramos, Garner, Zahn, and Foord revitalized the offense and ousted the Rams from the lead.

With 24-15 on the scoreboard, all eyes were on the last rally. After a series of back-and-forths, the Rams leaped to spike the ball, aiming to cut through the Tigers defense. Instead, the ball landed out-of-bounds and awarded the Tigers the game-winning point.