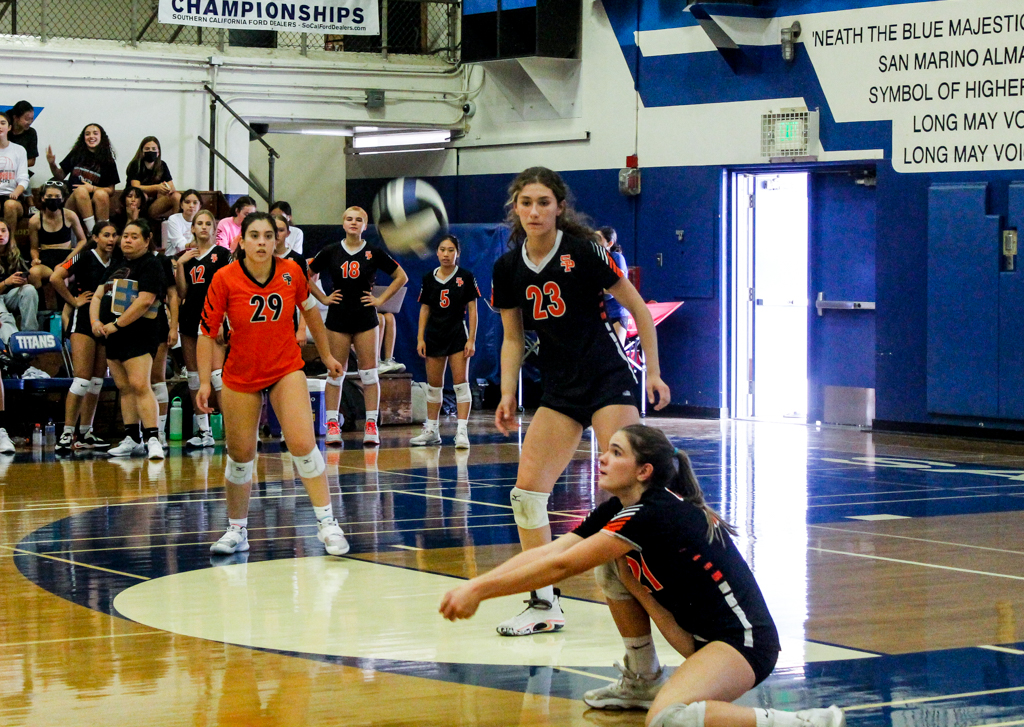 Juniors Helena Foord (21) and Jenna Garner (23) were a big part of South Pasadena's sweep of San Marino on the road.

Girls volleyball dominated its first RHL matchup on Tuesday, Sep. 14, brushing off their long-standing rival: the San Marino Titans. After overwhelming the opponents with back-to-back wins in the first two sets, the Tigers put their newcomers to the test. Noting a change in the Tigers’ team composition, the Titans made significant strides on the offensive. Still, their efforts were in vain, as the Tigers finished the match in a 3-0 landslide.

Junior setter Kendall Taylor began the first set with a series of consistent serves, paving the way for an early Tiger lead. The Tigers’ methodical line of attack left the Titans defenseless. Unable to keep up, the opponents opted instead for haphazard dives that frequently went out of bound, further lengthening the Tiger lead.

South Pas relied on junior outside hitter Jenna Garner and junior opposite hitter Ingrid Zahn on the offensive. With consecutive aces from Garner and critical kills from Zahn, the guests repeatedly caught Titans off-guard to wear down their home advantage, bringing the Tigers lead up to 19-4.

The Tigers’ aggressive streak left the opponents jumbled and restless. Despite a surge in attacking power and the slightest hint of a cohesive defense, the Titans were too far behind. The first set closed in favor of South Pas with 25-12 on the scoreboard.

The teams jostled for the lead as the buzzer sounded for the second set. While the Tigers swapped in players, the Titans cornered them into time-outs with rapid improvements in the backcourt. Just as the Titans’ crept up from behind to nearly overtake the Tigers, the visitors regained focus and shut down their opponents’ efforts.

Both teams suffered miscalculations as the twenty-five point mark entered their periphery.  While the Tigers capped off stretched rallies with point-winning spikes to redeem their errors, the Titans ultimately fell short. After an array of serves that widened the South Pas lead, Garner leaped for a powerful strike to close the second set 25-12 in favor of the Tigers.

Victories from the first two sets alleviated pressure from the visitors as they headed into the conclusive third set. While San Marino entered with full force, South Pas remained unbothered. The gap in skill level was so staggering that the Tigers put the first points up for grabs.

Picking up on the opponents’ indifference, San Marino put up a solid performance. Unlike in the first two sets, the Titans managed to break even around the halfway point. By then, their newfound attacking streak pulled them away from the Tigers, who, for the first time, found themselves trailing behind.

“I feel like we overestimated ourselves a bit [in the third set] and almost played down to [San Marino’s] level,” said junior middle blocker Maggie Hunter, “If we played how we usually play, we would have swept them really easily.”

Recalibrated by a brief time-out, the Tigers resumed positions on the court. A group of San Marino boys congregated in the far end of the gym, trying to energize their team, but it had little effect on the visitors as they quickly shrugged off the Titans’ two-point lead.

Taylor shone on the offensive side with reliable sets to Garner and Zahn that frequently redirected the Tigers’ point of attack. Freshman Senya Dorny and Hunter provided critical covers and blocks. Despite a series of uncharacteristic fumbles, South Pas pulled into a last-minute lead and stayed there. The Tigers didn’t let go until the third and final set went 26-24 in their favor, rendering them undefeated in the match.

“As a whole, the team is really bonded. I think we’re playing well together,” said Hunter. “Continuing into [the RHL], I feel very prepared.”

Girls volleyball will face its major rival, the La Cañada Spartans on the road next Tuesday, September 20.