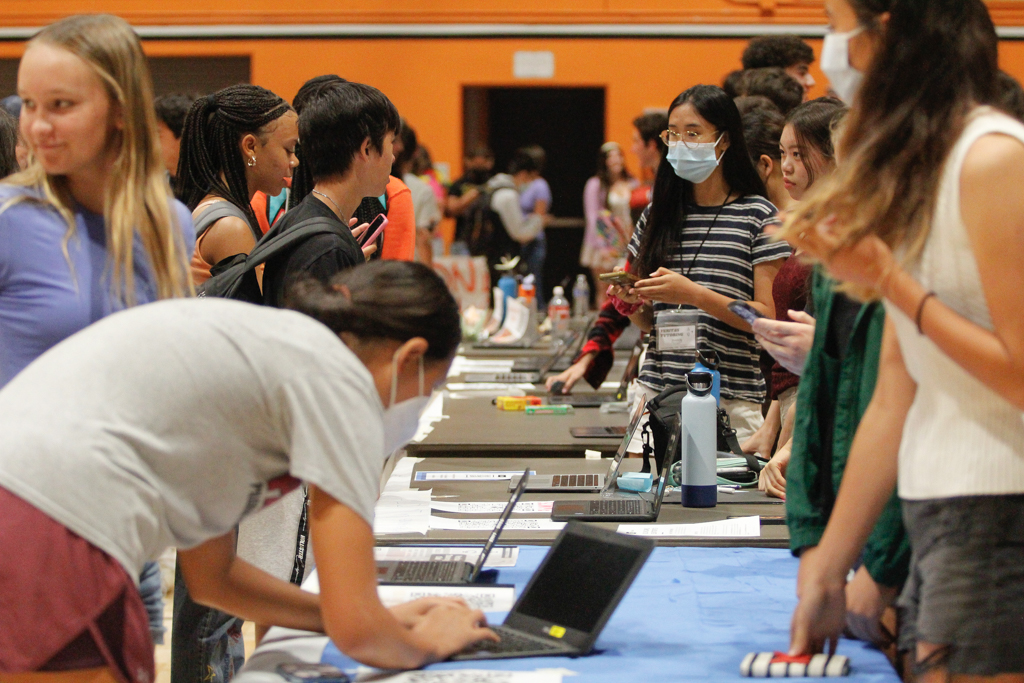 Students visited over 80 different clubs for the annual Club Rush after last year's event was featured on the numbered walkway.

After a three-year-long wait, the SPHS annual Club Rush resumed its appearance inside the gym from Thursday to Friday, Sep. 8-9. Club members pitched their clubs from behind tables decked out in a variety of colors and decorations. Stands drew in students with candy, stickers, and an idea of the year to come. Students huddled around tables, taking out their phones to scan QR codes and fill out google forms.

Last year’s club rush took place on the numbered walkway, a change from the recent event. The border and middle of the gym was lined with new and old clubs alike, creating a consolidated indoor space for people to more easily tour stands.

“It was better that it was indoors. When it was all in a line people didn’t walk to all the clubs,” Writing club co-president sophomore Zoey Kuhn said. “The enclosed space made it more engaging.”

“Student participation is definitely higher this year as seen with the number of new clubs formed and old clubs being reinstated,” Commissioner of Clubs and senior Stephanie Law said. “There is also a wide variety of clubs this year.“

Experienced clubs such as TASSEL and Key club boasted long lines while new groups such as the Asian Cultural, Jewish Mitzvah, and World Wide Reading Buddies clubs also attracted eager students. The positive atmosphere influenced by music and large crowds led excited students around the gym to view the diverse array of clubs SPHS has to offer. From .GEN, an activism club focused on menstrual equity, to Sewing Club, a hobby club that teaches sewing, there were many options to look into for students.

“I believe publicizing Club Rush, Homecoming Picnic, and our second-semester club event will work towards this goal. Boosting club culture as a fun way to get involved in our school and community will draw students to join clubs.”

Law looks to organize Homecoming Picnic, the second club-based event of the year, on Friday, Oct. 7 where SPHS clubs will have an opportunity to fundraise by selling goods and putting on activities.