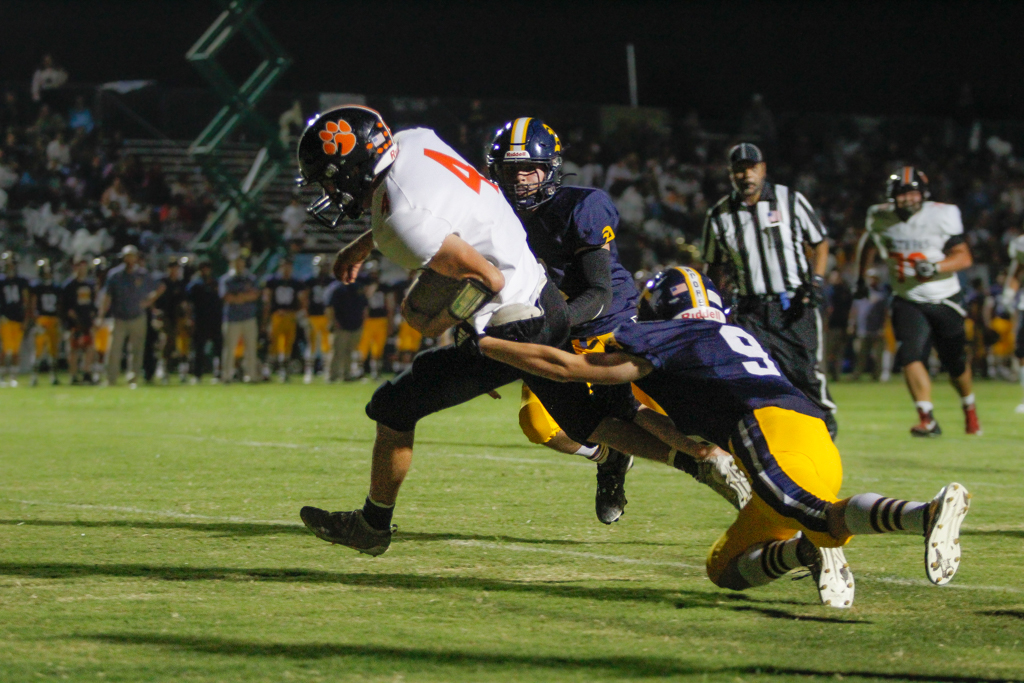 Senior Richard Conti (4) stepped up on the road as quarterback, running for two touchdowns and leading South Pas to a win.

Football extended its win streak by beating the Alhambra Moors 29-14 on Color Day, Friday, Sep. 16. The Tigers were down senior quarterback Jackson Freking and junior tight end Sawyer Fox, both sidelined by injuries, but other players managed to fill the gaps. The defense continued its tear, forcing six turnovers, while the offense found ways to gain yards and get into the end zone.

The game began with South Pas in possession of the ball. Senior Richard Conti, under center in place of Freking, handed the ball off to junior running back Jason Hong for a short gain. After a pass intended for senior wide receiver Quinn Sterling fell incomplete, the Tigers punted.

Senior kicker Aidan Kinney unleashed a spiraling punt and senior safety Jason Yipp wrapped up Alhambra’s return man, forcing the Moors into an unfavorable field position. The Tigers outstanding special teams play throughout the season continued against the Moors. Alhambra was able to convert a third down pass on the drive, but senior defensive tackle Isaiah Cooper and Sterling forced a turnover on downs a few plays later.

Next, the Tigers began a long drive into Moors territory. Conti threw an interception, but the play was negated by a holding penalty and South Pas was given new life. The Tigers capitalized on the call, with Hong and senior running back Matthew Takausgi alternating carries and knifing through Alhambra’s defense. On the next play, Conti rolled out and attempted to run into the end zone, where he was stopped just short. The Tigers would score on the next play, as Conti broke the plane of the goalline and gave South Pas a 7-0 lead.

Alhambra’s next drive seemed promising, starting with a 20 yard gain through the air. However, a dropped pass and an overthrown ball put the Moors in a 4th & 2 situation, and Takausgi’s tackle on 4th down forced Alhambra to surrender possession.

South Pas took over at the beginning of the second quarter, and the two teams traded punts.  However, South Pas was determined to score once they regained possession. Hong started the drive with a strong gain on the ground, and Conti found sophomore tight end James Dowd for a completion. Then, threatening the end zone, Conti rolled out to his right and sprinted past defenders into the end zone for a rushing touchdown. Conti’s second touchdown of the game had the Tigers up 14-0 in the second quarter.

On the next drive, Junior linebacker Giovanni Cruz shut down Alhambra’s offense with a physical tackle, and the Moors punted. South Pas could not capitalize on their drive and punted the ball back to Alhambra. With two minutes until halftime, the Moors finally got on the board, piercing past the Tiger’s defense. Alhambra’s quarterback lofted the ball to the back of the end zone, where the Moors wide receiver leapt in the air and hauled in the pass. The lead was halved, and the score stood at 14-7.

South Pas nearly capped off the first half with an uproar, as Conti heaved a pass to senior wide receiver Nick Eshom 40 yards down the field. Eshom caught the pass, but in a race to the end zone with zeroes on the clock, he was tracked down.

By the start of the third quarter, the Moors only trailed by a touchdown when Cruz tackled Alhambra’s running back and a high snap was recovered by Eshom. In the blink of an eye, South Pas had forced a turnover.

The Tigers leaned heavily on Hong throughout the next drive. A pitch and handoff to Hong on consecutive plays wore down Alhambra’s defense, and junior wide receiver Isaiah Hyun came down with an impressive catch in traffic. At the nine-yard line, Hong plowed past defenders and walked into the end zone for a touchdown. Conti scored on the two-point conversion, and South Pas extended their lead to 22-7 midway through the third quarter.

Hyun came through again, this time on special teams, recovering Kinney’s spinning kick to give South Pas possession. However, on the very next play, Conti was intercepted and the Moors got the ball back. Alhambra began a long drive, but any hopes to get into the end zone were eliminated by Yipp’s interception. South Pas then scored a touchdown as Conti flipped the ball to Kinney who blazed outside and then cut back inside and into the end zone. The game was starting to get out of reach with five minutes left in the third quarter, with the score standing at 29-7.

Pressure from Dowd forced an incompletion, and Kinney furthered his electric performance on the night with an interception.

“On the touchdown I saw a hole on the inside, I took it through, got a round a couple guys, and it was a score,” Kinney said. “And then same thing on the interception, I saw it early and was there, [I] made the play.”

The Tigers then focused on conserving the lead, running the ball, letting the clock run, and turning the ball over on downs. Alhambra and South Pas punted on each of their next drives before the Moors got into the end zone on a rushing touchdown. Despite a batted pass from Eshom, Alhambra scored its second and final touchdown of the game. Though, the Tigers still kneeled out the victory 29-14.

“We have been watching films, we have been in the weight room, we are out at practice every day, we put in the work and we are seeing the results,” Kinney said.

South Pas will play at home against Monrovia High School on Thursday, Sep. 29 in its first Rio Hondo League matchup after a bye week.