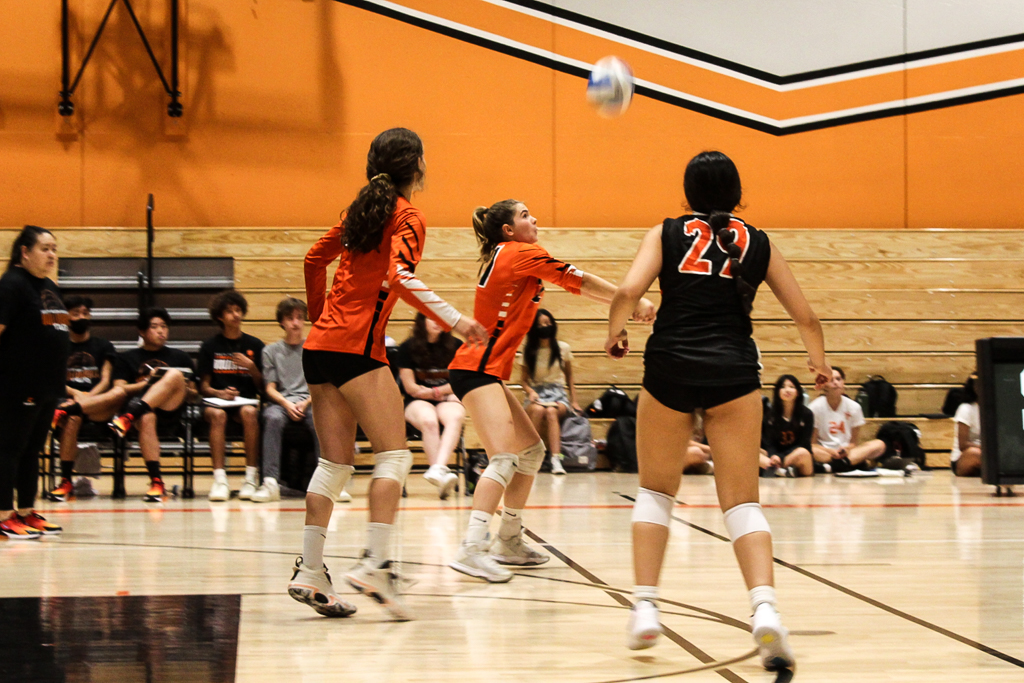 After losing the first two sets, junior outside hitter Helena Food (21) helped lead South Pasadena to a victory at home.

Girls volleyball revived its pre-league winning streak by defeating the Campbell Hall Vikings on Wednesday, Sep. 7. South Pas bounced back from consecutive losses in the first two sets to force a fifth set, bringing home another win to enter RHL play with an astounding 13-1 record.

The Vikings took advantage of a slow start from the Tigers to take an early lead as the first set kicked into play. Their momentum brought a bout of unpredictability that carried through the set, which, combined with the swiftness of their attacks, left the Tigers searching for points.

Junior outside hitter Helena Foord was vital to the Tigers’ resistance. With the help of Foord’s crucial digs and spikes, the Tigers managed to break even with 14-14 on the scoreboard.

A series of Tiger miscalculations gave the Vikings a two point lead as both teams approached the 20 point mark. Despite the Tigers’ best efforts at closing the gap, the Vikings attacking streak was difficult to overturn. Edging out the Tigers 25-21 in the first set, the Vikings proved to be a competitive opponent.

Despite the disadvantage in supporters, the Vikings brought the same energy to the Tigers’ court as they would to a home game. As the buzzer sounded for the second set, the Viking offense lined up alongside the net, waving their hands in the blocking position in a bold display of spirit.

The opponent’s unwavering confidence was evident as Campbell Hall propped up another comfortable lead from the onset. Unlike the first set, South Pas struggled to break even at halfway point, opening the room for the revitalized opponent offense to further lengthen their lead.

Despite the Vikings’ errors, the Tigers continued to trail behind 10-17, forcing the team to resort to a defense-focused formation. Senior captain Ava Dorny provided the team with crucial blocks, while Foord roamed the backcourt, ready to make a dive for the unexpected cross court shot.

Despite the Tigers’ efforts, the Vikings’ dominance was difficult to match. As the second set came to an end, the score was 25-17 in favor of Campbell Hall.

The gym, occupied mostly by Tiger supporters, teemed with uncertainty. If the Tigers wanted a chance at winning the game, they had to search for a comeback. Rejuvenated after a thorough huddle, the Tigers gained a newfound strength to open the third set with a strong lead. Foord was key to the team’s success, making consistent serves that set the tone for the Tiger offense. Frequent aces from the Tigers deflated the Viking spirit, tipping off their rhythm.

With the help of the Tigers’ strategic positioning and effective communication, junior Jenna Garner alternated between unpredictable tips and crushing spikes to send the weakened Vikings diving at all four corners.

The crowd’s suspenseful drum rolls echoed between each serve as the Tigers earned the winning point, foreshadowing an exhilarating comeback as the third set closed with 25-16 Tigers’ win on the scoreboard.

By the fourth set, South Pas had shaken off the jitters. Enthusiastic cheers from the sideline fueled the team as they put themselves back in contention for the win. Garner contributed consistent digs to junior setter Kendall Taylor, giving junior Ingrid Zahn and Foord ample momentum to execute deadly spikes.

The Tigers’ streak of aggression didn’t restrain the Vikings from jumping at Tiger errors. Occasional missed serves from the Tigers inspired bouts of , allowing them to break even 12-12.

As both teams locked in for the final race to 25, Garner executed three effortless serves, springing both teams into contested rallies. Zahn used this opportunity to make quick work of the Vikings’ crumbling defense, awarding the Tigers a 25-19 win in the fourth set, and a near standing-ovation from the crowd.

The Tigers’ resilience earned them a chance to redeem their slow start in the fifth and final set.

As the teams exchanged rallies, the score went up incrementally. A point for the Tigers was met with a corresponding point from the Vikings.

An ace from junior libero Mia Ramos awarded a point to the Tigers. Still, the crowd was at odds as the game remained too close to call.

With 15-14 on the scoreboard, virtually everyone was on the edge of their seats. Despite the frenzy of the crowd, both teams maintained remarkable focus.

The set went on. Zahn rode the 19-18 South Pas lead to deliver a powerful topspin that cleared the net, sending the enemy libero scrambling to meet the ball as it dove towards the ground.  Next, Taylor set the ball across to Foord. With a potent final spike, the tightly-contested fifth set was awarded to South Pas with 20-18 on the scoreboard.

“I think the way we finished the game was the way that I wanted [the girls] to perform. The first two sets were a little bit slow, but… after the second set, it was easy for them to understand the game they [should] be playing,” head coach Ivy Chew said. “They really showed a lot of resilience [today]”.

The Tigers hope to trump the San Marino Titans in its first league game away on Tuesday, Sep. 13.