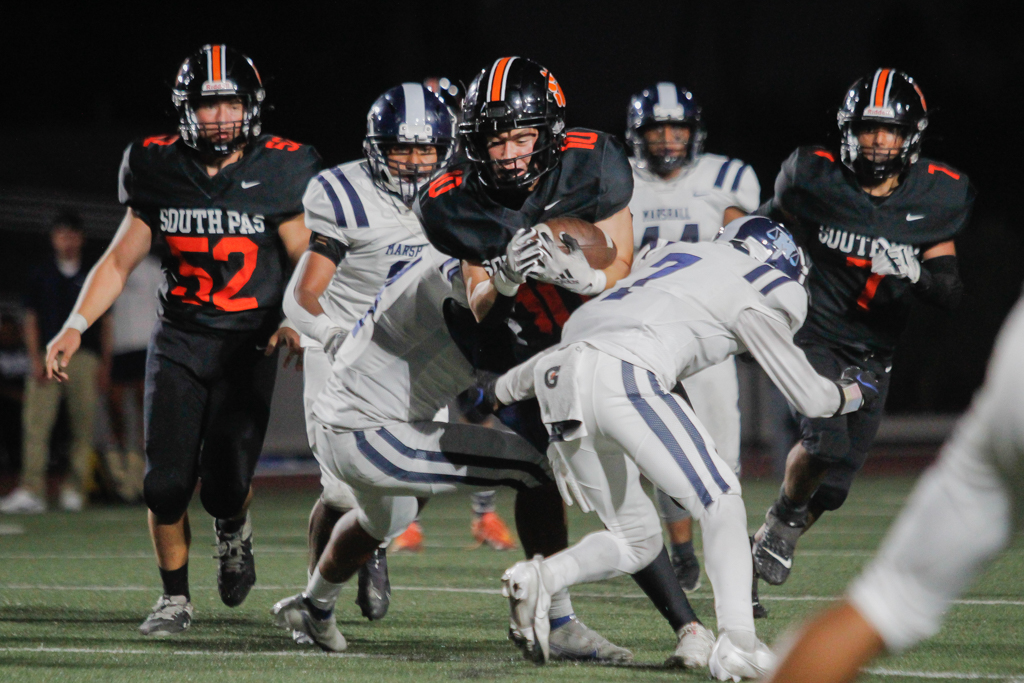 Junior Luke Riffle (10) was one of the many Tigers that contributed to a dominant offensive performance on Thursday night.

Football pummeled John Marshall High School 53-0 on Thursday, Sep. 1 at home. The offense flawlessly flew all over the field, with senior quarterback Jackson Freking throwing in rhythm throughout the night. The defense shutout Marshall for the second consecutive year, completely eliminating any sense of a running game or passing threat from the Barristers offense.

Fans filed into the stands on neon night and watched their team immediately light up the scoreboard. South Pasadena roared out of the gates, scoring 30 points by the first quarter. Junior running back Jason Hong knifed through the defenses for productive yardage, and junior wide receiver Richard Conti showcased his athletic route-running abilities on a ten yard gain. On the next play, Freking rolled out to his yard and floated a pass to sophomore wide receiver James Dowd who leapt for an over-the-head catch. Senior running back Matthew Takasugi powered his way into the endzone for a touchdown.

With great field position, Freking delivered a well-timed pass to Conti, who hauled in the football uncovered over the middle of the field. Conti sprinted to the end zone for a 44-yard touchdown. Five minutes into the game, South Pas led 13-0.

Sterling, Riffle, and senior safety Jason Yipp overwhelmed Marshall’s offense and forced a second Barrister punt in as many drives. When South Pas regained possession, Takasugi moved South Pas into Marshall territory. On the next play, Marshall wrapped up Freking and it appeared he was destined to take a sack. However, Freking spun around and in his frantic effort to heave the ball and avoid the sack, he connected with Dowd. Dowd made the grab and Hong walked into the endzone untouched a play later. The score was 20-0.

Marshall’s quarterback threw the ball deep with two Tigers in coverage but it was quickly deflected to Yipp, who hung on for an interception. South Pas were pushed by two penalties on the next drive, but Freking quickly erased the disadvantageous field position by finding Conti over the middle. Conti created separation from his defender, caught the ball in-stride, and blazed across the field to the end zone for another South Pas touchdown. The 90-yard touchdown extended the Tigers lead to an insurmountable 27-0.

Seemingly the only negative on the night for South Pas came on the next drive. Hong, a key piece both offensively and defensively, was ejected for what the referees deemed a late hit on the opposing quarterback. Hong sat out the rest of the game and is suspended for next week’s matchup against Heritage Christian. South Pas will appeal the suspension to CIF.

South Pas would add another touchdown in the first quarter as Dowd recovered a Marshall fumble, and Riffle got an opportunity at running back. Riffle took advantage of this opportunity, ducking past defenders near the end zone and Freking reached across the goaline to score the touchdown.

“Having Luke Riffle at running back to sub in for Jason Hong, I think he did a great job of coming in and continuing our running game,” head coach Jeff Chi said.

As the first quarter became the second quarter, Junior cornerback Harrison Farley made tackles. On offense, Takasugi scored another touchdown, his second of the night. The score was 40-0 by halftime.

SPHS Tiger band’s elaborate halftime show transitioned into the second half, where the Tigers’ lead was well out of reach. Dowd, Conti, and Quinn made catches to begin the second half, and Freking ran outside for a score. Senior defensive back and team captain Richard Najar showed his physicality on a tackle.

Coach Chi began to sub-in backup players with a 46-point lead. Sophomore running back Aidan St. John maneuvered around defenders to score a touchdown, totaling the score at 53-0.

The Tigers have started the season off with three consecutive victories. South Pas’ offense appears unstoppable with the Freking-Conti connection and a deep backfield, while the defense has surrendered a mere 13 points over a combined three games.

“I think our guys believe in the system and are really hustling to the ball. We’re feeding off of each other’s energy and I think that’s a big part of it,” Chi said. “When they trust one another, they play hard for one another, and it’s been working so far.”

South Pas will face a more competitive opponent next Friday, Sep. 9, at home against Heritage Christian.