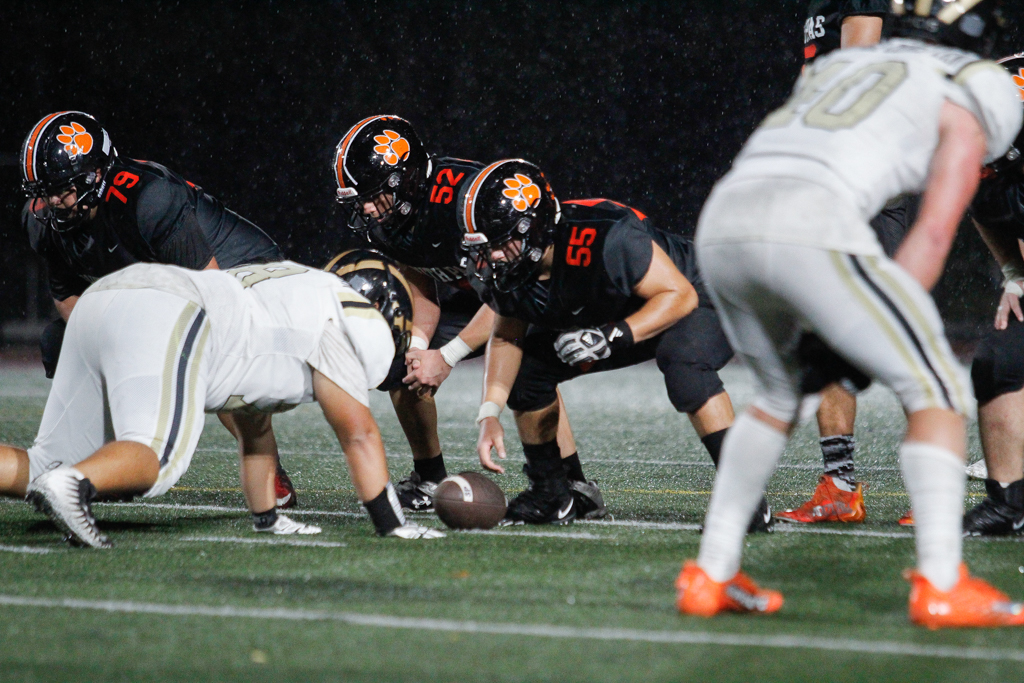 On a rainy night in South Pasadena on Sept. 9, football defeated the Heritage Christian Warriors 12-0 to extend their winning streak to four games. The contest was controlled by the Tigers defense, registering their second shutout in as many weeks.

The Warriors tried to run their way through the Tigers defense on the first drive of the game, but it was no avail. Fox, Farley, and Sterling all made physical tackles to force a Heritage Christian punt. The Tigers took over possession and their dynamic backfield of Hong and Takasugi carried the offense deep into Warriors territory. After a short catch from Dowd, the Tigers were set up at the goaline. Heritage Christian’s bending defense, however, refused to break, and South Pas failed to reach the end zone. Senior kicker Aidan Kinney came on for the 29-yard field goal and nailed it, giving the Tigers the first points of the game.

During the break midway through the first quarter, the crowd applauded for class of 1970 graduate and former South Pasadena coach Ray Solari, of whom the stadium is named after.

When play resumed, Kinney continued impacting the game with his leg, pinning the Warriors at their own 17-yard line with a skyscraping punt. Heritage Christian tried to climb out of the unfavorable field position, picking up a first down and additional yards on a facemask penalty. Then, Fox and Dowd sacked the Warriors quarterback on back-to-back plays respectively, and Heritage Christian punted the ball away.

Senior quarterback Jackson Freking was looking for his favorite target, senior wide receiver Richard Conti, down the sideline on the Tigers next drive. The duo had been shredding defenses and scoring touchdowns through the beginning of the season, but this ball would fall incomplete and Tigers were forced to punt.

This time it was Fox who showed off his powerful leg and put the Warriors at their own 12-yard line. The special teams stepped up, making it difficult for Heritage Christian to get any sense of a rhythm throughout the night. After a Warrior’s wide receiver came up with a leaping grab along the sideline, the drive stalled and the Tigers got the ball back.

South Pas seemed primed for the end zone on their next drive. Takasugi and Hong pushed ahead for first downs, and Freking found Conti for a spectacular out-streached catch between defenders at the Warriors one-yard line. Three efforts to punch the ball across the goaline fell short, so the Tigers called a timeout in preparation for a crucial fourth down play. Freking’s pass to Hong was short of the end zone and the Tigers turned the ball over.

Just as the crowd groaned at a missed opportunity, Cruz brought the Tiger faithful to their feet on a safety the very next play. Late in the second quarter, the defensive battle favored South Pas 5-0.

The Tigers began another drive by establishing their running game. Hong slipped through defenders for a first down, but the Warriors prevented the Tigers from adding to their lead. South Pas punted. Another unsuccessful Heritage Christian drive began deep in their own territory. Cruz tackled the Warrior’s running back, and a deep ball fell incomplete.

Kinney received Heritage Christian’s punt and blazed down the sideline, but the return was negated by a penalty. Sterling hauled in a pass for a first down, but Freking’s next pass was intercepted by a Heritage Christian defender. Amidst a dominant defensive performance and impressive special teams showing, the Tigers offense would turn the ball over three times on the night.

On the last drive of the first half, the Warriors looked to take the lead. Cruz sacked Heritage Christian’s quarterback for the second time, but the Warriors offense recovered. The quarterback rolled out to his right and fired a pass 20 yards downfield. The Warriors were on the Tigers five-yard line with seconds to play. With the crowd on its feet, Heritage Christian bobbled the snap and Eshom burst through the defense to sack the quarterback. This electric play capped off the low-scoring first half.

Rain began to fall on the band as they performed the halftime show. South Pas began the second half with possession and immediately turned the ball over. A Warrior’s play wrapped up Freking, and in his effort to heave the ball away, Freking threw it to a Heritage Christian defender. The Warriors threatened again on their next drive, riding the running game near the Tigers end zone, but South Pas made a goal line stand and Takasugi tackled the running back on a fourth down play.

Hong gained ground on the next drive and Fox slipped past defenders for a first down, but South Pas punted a few plays later. Sterling overwhelmed Heritage Christian’s running back, tackling him for a loss. The third quarter came to a close and the Warriors opened the fourth quarter with a big gain through the air. On the next play, Farley came up with a strong tackle and forced the ball loose. Senior defensive tackle Ivan Becerra was there to recover the ball.

“I saw the quarterback throw the ball and I knew I had to hustle to the play,” Becerra said. “I got there, I saw the ball pop out, and I jumped on it.”

South Pas scored a touchdown on the next drive to put the game out of reach. Takasugi and Hong wore down the Warriors defense, and Hong found the end zone. Barrelling past defenders, the Tigers running back extended the lead to 12-0.

The Tigers defense, now with the cushion of a two possession lead, but the finishing touches on a brilliant performance. Hong impacted the game defensively with a tackle for loss, and Sterling had another tackle to wreak havoc on Heritage Christian’s offense. The Warriors punted and the Tigers ran out the clock, running the ball and taking a knee to complete the 12-0 win.

After losing to Heritage Christian in a nail-biter last year, the Tigers secured the victory this time. South Pas won their fourth straight game while breaking the Warriors winning streak.

“We came out hard, we knew they were a great team,” Becerra said. “[In the] first half it was looking pretty dark, but we pulled through at the end…hell of a job by the defense.”

The Tigers will play the color day game against the Alhambra Moors next Friday, Sep. 16, on the road in their last non-league game.