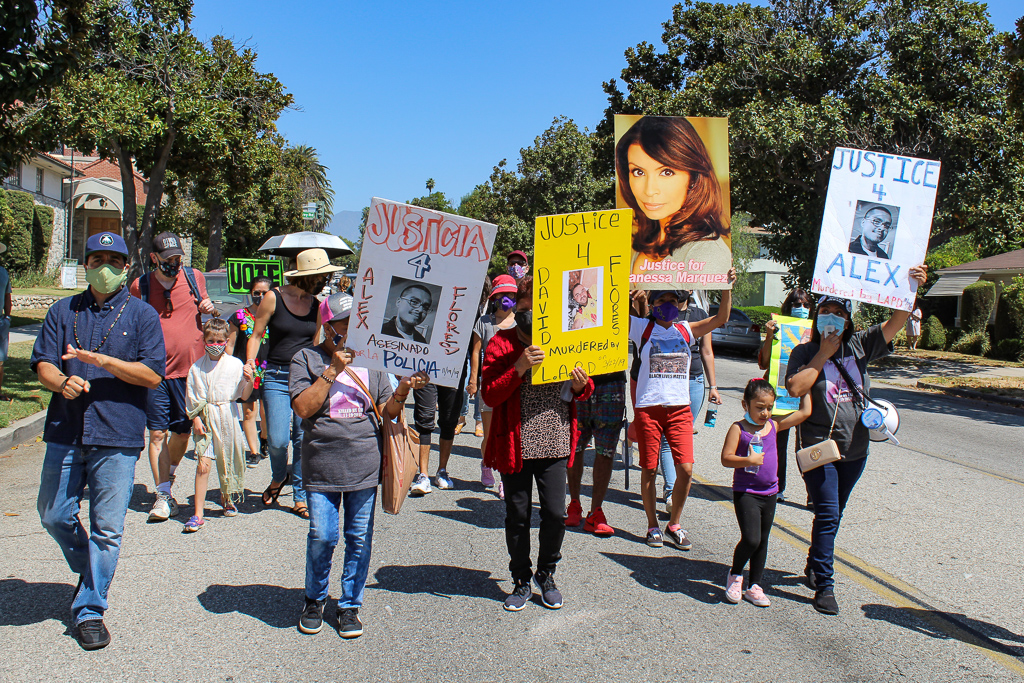 The officers who killed Marquez have not been charged, and her mother has filed a civil rights lawsuit against the City and SPPD for damages.

South Pasadena community members rallied together on Mission Street on Sunday, Aug. 30 for actress Vanessa Marquez’s second Angelversary, recognizing her killing by SPPD officers in 2018. Attendees dressed up in Star Wars costumes to commemorate Marquez’s love for the film franchise, and families impacted by her death and acts of police violence shared their experiences.

Community members met at Marquez’s house on Fremont Avenue and a blessing led by the Mexicas, an Aztec dancers’ troupe called the Ehecatl Danzantes, opened the event, acknowledging the four directions. Supporters gathered to pay tribute to Marquez by recalling her positive impact on her fellow actors, friends, and family.

Holding up signs advocating for justice for victims of police violence, marchers walked to city hall as they chanted for police reform. The protest also sought to raise community support for the Black Lives Matter movement as speakers actively engaged passersby.

“Vanessa’s story is still unfinished. I believe thanks to her story, the corruption of the city council and city government is being exposed, the incompetence and bad training is being seen by everyone as well a the cracks of the dark side of Mayberry,” Marquez’s friend Minerva Garcia said. “Too many white people were looking down at the event and upset that we held up a mirror to their prejudices against BLM and the blind allegiance they have towards police. Vanessa’s case is not going to be swept under the rug.”

Patrick Baca, Marquez’s co-star in the movie Stand and Deliver, called for an end to the injustice of police violence that stole Marquez’s life.

“The Angelversary tribute keeps Vanessa’s spirit alive while also applying pressure on the city to change,” Baca said. “Vanessa was talented, sensitive, outspoken, and ambitious. She struggled, but she lived unabashedly on her own terms. I know she had more to accomplish and it’s devastating that her journey was cut short. I’m hopeful that the magic and beauty that was Vanessa will bring the reform and respect we’re desperate to achieve. This change will be Vanessa’s legacy and gift to South Pasadena.”

In 2018, SPPD officers responded to a welfare check regarding Marquez and found her having a seizure. Later, when officers forced her to go to the hospital, Marquez pulled out a BB gun and officers fired at her. After the L.A. District Attorney’s Office declined to file charges against the officers involved in her killing, Marquez’s mother Delia McElfresh filed a $20 million civil rights lawsuit against the City of South Pasadena and the SPPD in June 2020.

Marquez’s supporters have continued to increase awareness of her killing and demand accountability with the recent rise of the Black Lives Matter movement by partnering with the activist group South Pasadena Youth For Police Reform. A documentary about Marquez is also in the works by independent filmmaker Cyndy Fujikawa.

Watch the video of the event. You left out key details and phrased things in a way that make the police look bad. She pulled a gun, instead of shooting her on the spot they backed down and left her condo. She proceeded to walk out and aim the gun at one of the officers heads. You selectively failed to mention the fact that the bb gun was a replica that from the amount of time they had to examine it looked everything like a real firearm. Isn’t it also funny how her family didn’t do anything to help her but the moment she dies they hop on the first opportunity to make money off of her.