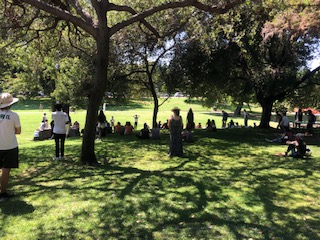 SPHS alumnus London Lang organized the community meeting in addition to coordinating all of the local protests in the past week.

Community members discussed reforms they want the SPPD to implement, at Garfield Park on Thursday, June 4. SPHS alumnus London Lang, who organized the protests in South Pasadena in the past week, led the meeting with about 100 residents in attendance.

Police brutality has recently received massive news coverage after a white policeman held his knee on a black man’s neck for 8 minutes and 46 seconds in Minneapolis, killing him. This spurred an outbreak of protests nationwide, calling for law enforcement reform and an end to police violence against black Americans.

The community meeting served as an opportunity for South Pasadena residents to look introspectively at policing in their own community and find ways to improve it. Attendees noted the importance of proper police training with an emphasis on deescalation. Part of that, they concluded, involved demilitarization, requiring units of ethics studies from an accredited college, mandating all new recruits have at least a bachelor’s degree, and that a mental health professional be available all the time.

South Pasadena was confronted with its own officer-involved shooting in Aug. 2018, when a group of officers and a mental health clinician attempted to escort resident Vanessa Marquez to seek medical attention. Marquez refused, later reaching for what the officers perceived to be a weapon (determined to be a BB gun) and they responded by shooting her. The Los Angeles County District Attorney’s Office decided in Mar. 2020 not to press charges after reviewing the body camera footage, although several community members protested for prosecution after Marquez’s death.

Meeting participants, the majority of whom were youth, also discussed the amount of city funds allocated to the SPPD, which many argued could be better applied to social services and other community resources. Community members additionally brainstormed pricing tickets more fairly, possibly with community service instead of money, and suspending paid administrative leave for officers under investigation.

Lang hopes that giving residents the platform to share their experiences with the police and racism in South Pasadena will bring about local change.

“Me and my team took notes and are currently working on researching the topics and finding solutions to the issues. Once we do all of that, we will meet with the city council and soon the chief of police and mayor of SP.”

Community members have been protesting in support of Black Lives Matter at the intersection of Mission and Fair Oaks all week starting at 12:00 p.m., and are scheduled to continue to do so until Sunday, June 7.