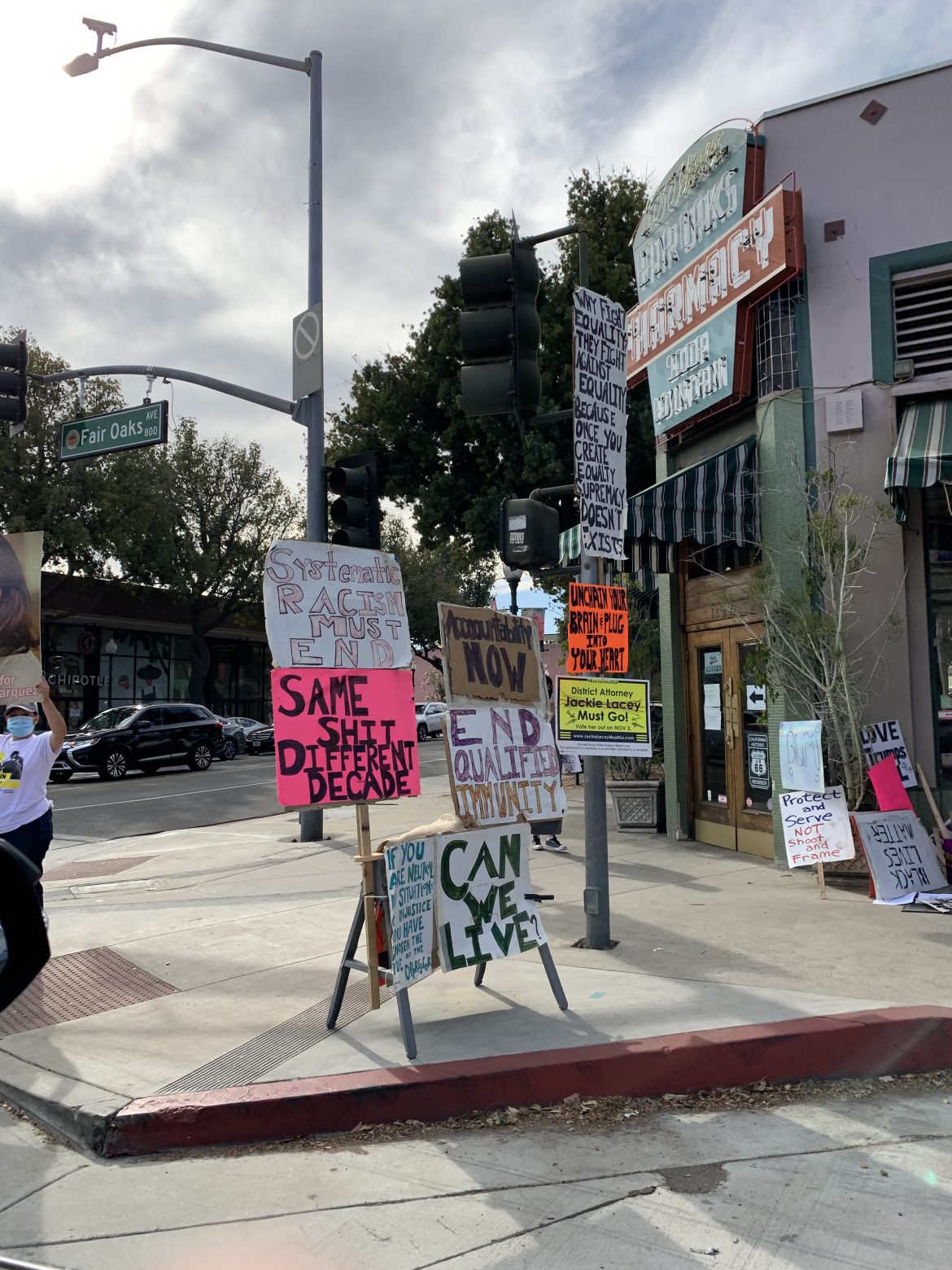 Saturday's protest celebrated the end to demonstrations at the intersection of Fair Oaks Avenue and Mission Street, while also opening a new chapter to coalition building for anti-racist action.

Towards the beginning of the protests in June, individuals met nearly every day from 12:00 p.m. to 6:00 p.m., cutting back to three days a week after several months. Protestors and organizers have sacrificed a tremendous amount of time for the movement in order to make lasting and meaningful change in South Pasadena.

“We have been a reminder to this community that there are issues in this system and even within our local policing that need to be addressed. I believe that we brought a lot of visibility in a positive way to the movement,” BLM South Pasadena leader Fahren James said.

Many of the individuals who attended Saturday’s event had been protesting at the intersection for several months and have cited social media as an important platform for gaining local support.

“I’ve seen a lot of people coming together on social media, because we can’t do a whole lot in person. People are coming out here [to protest] that usually wouldn’t, and they’re paying more attention [to the movement] now. I’ve seen a lot of minds changed,” protester Rose McPhilla said.

Although protests will no longer be held, many people still believe that the work to dismantle systemic racism is not over.

“I hope that there’s more changes in the City Council going forward, and more deep changes within the police department to address their bias and the need for reform,” protester Victoria Patterson said.

The South Pasadena protests began as a result of the police killing of George Floyd on May 25 that sparked nationwide BLM demonstrations. James and South Pasadena Youth for Police Reform (SPY4PR) leader London Lang began organizing protests to bring attention to the police reforms needed in South Pasadena.

On BLM South Pasadena’s last day of organization at the intersection, protesters held signs reading “accountability now,” “can we live?” and “systemic racism must end.” A booth was set up for snacks and drinks, and music played from a speaker while children created signs.

These protests have made several local changes possible. The School Board eliminated the use of drug dogs, a practice many attested to being racially discriminatory, in SPUSD in June, and the City Council created a sub-committee to discuss the future of policing which held a  community forum where residents shared their experiences with the SPPD. However, after the resignation of former council member Marina Khubesrian, the sub-committee was disassembled. Also, SPY4PR’s list of police reforms and city ordinance changes and Care First South Pasadena’s demand for a 15 percent cut to the SPPD have gone almost entirely unanswered.

Going forward, James hopes that the City Council will make changes to address the community’s need for police reform. She is also in the process of forming a coalition with other organizers in California to represent an array of voices calling for an end to systemic racism.

“We have to see what happens within this local City Council, because again, we can’t have a city council that is comfortable with being silent regarding all issues in the community,” James said. “My goal is to build a coalition with other activists and organizers here in California so that we can continue to push measures on the state level. If we can’t get the cities to cooperate, we’ll move to the state level.”

Residents and organizers are looking forward to the local election results, in hopes that the City Council will take further action to reform the SPPD.