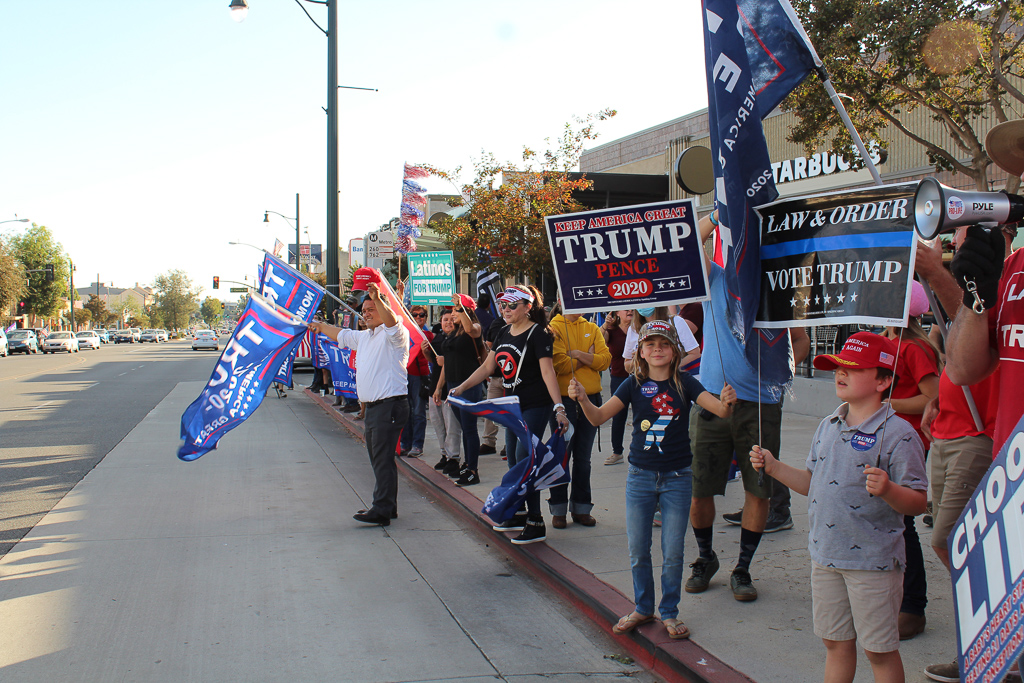 Trump supporters rallied together at the intersection of Fair Oaks Avenue and Mission Street on Sunday, Nov. 1, and several of them assaulted an underage counter-protestor.

Counter-protests, most of whom were youth, showed up to oppose the Trump enthusiasts and voice their support for BLM and democratic presidential nominee Joe Biden. Many residents were outraged that there was a Trump rally in South Pasadena.

“I think the thing that made me the most angry was that it was in South Pasadena, and you know it’s a very liberal town,” senior and counter-protestor Audrey Ernst said. “We’ve had the BLM peaceful protests there for months and when they’re finally done, [Trump supporters] come here and spread all this horrible hatred in a town that is liberal and is inclusive, and it just made me so mad.”

After a Biden supporter knocked some pro-Trump baseball hats that the supporters were illegally selling off a table, a Trump enthusiast proceeded to drag the minor across the floor by her hair and a group of about five supporters began kicking her. The South Pasadena Police Department (SPPD) arrived on the scene but did not arrest the agitators, much to the frustration of some witnesses.

“The situation with [the SPPD] was extremely saddening. [The victim] was physically hurt and very distressed as we all were. The people who hurt her stood very close to us while we gave our statements which was very inappropriate, frustrating, and uncomfortable,” junior and witness Ava Dunville said. “I was really upset that no action was taken [by the police] directly after she was assaulted. I feel as though accountability in our city needs to be a priority and I’m just not seeing that right now.”

The victim’s family plans to press charges against the assaulters.

I was actually standing amongst the Biden/ BLM people on the north west corner for at least 30+ minutes and everyone was just fine on both sides. I called looking for my friend and he said you know your on the wrong corner don’t you? People want something dramatic to happen so desperately the will do anything to start it.

I was there and the only hatred and racism I experienced was by Biden supporters. I was called many disgusting names by young and old people on the left. As a Latina woman, I should be offended, but I have come to realize that the leftist are just very hateful and intolerant people. So sad!

The Trumpers were not just minding their own business. At one point earlier in the day, they formed a gang and aggressively marched at the Biden supporters who were blocks away. One of them, without a mask, kept spewing his ideology and saliva and kept coming at people, trying to knock into them. I was there. Get your facts straight, Jill, or go back to your book club.