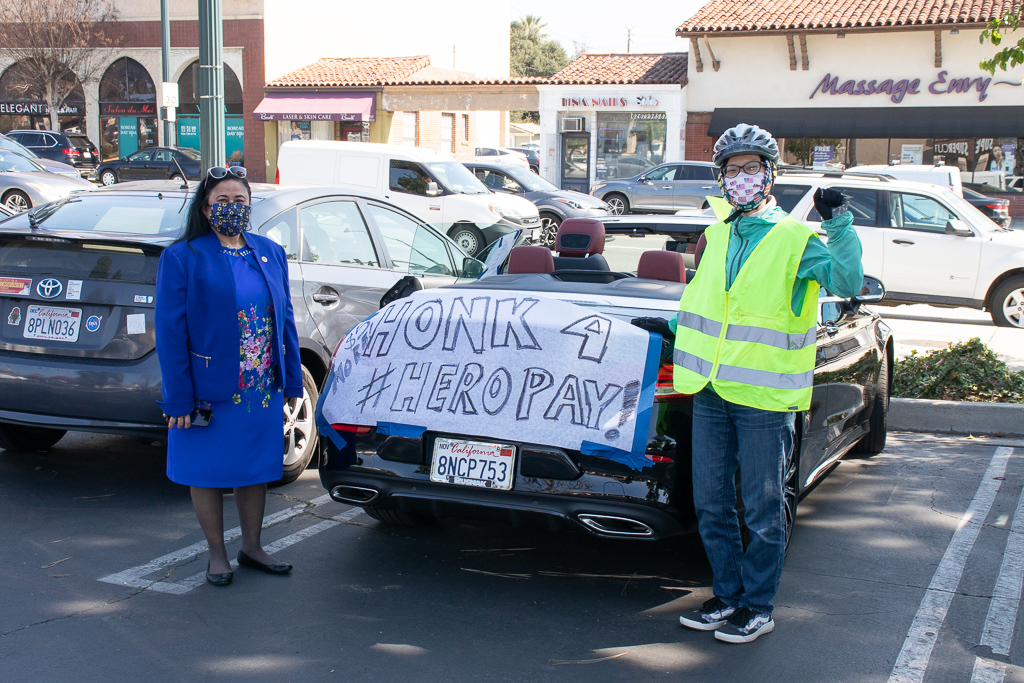 After many public comments and a rally in support of essential workers, the City Council approved a hero pay ordinance at its April 21 meeting.

South Pasadena activists advocated for a local hero pay ordinance in March, when over 150 residents signed onto a public comment calling for a $5 hazard pay increase. Leaders of the advocacy group, Ella Hushagen, Helen Tran, Anne Bagasao, and John Srebalus also organized a rally outside Vons in support of the cause on Saturday, March 13. Ultimately, the Council decided against the $5 increase and approved a different ordinance with a $3 increase.

Hero pay first appeared on the Council’s agenda on Wednesday, April 7, which is when they established its 60 day duration period and decided which retail workers to include in the ordinance. The original staff report presented to the Council only deemed employees of South Pasadena grocery stores — Pavilions, Vons, Trader Joes, Ralphs, Grocery Outlet, and Bristol Farms — eligible for hero pay. However, the final ordinance adopted by the Council includes employees of the pharmacy Rite Aid as well.

Throughout the public comment section of the April 21 meeting, community members urged the Council to adopt the ordinance in solidarity with the United Food and Commercial Workers International Union and show their appreciation for front-line workers.

“Essential workers did not sign up to risk exposure to infectious disease, get sick, and die at record rates,” community member Maria McMillan said in a public comment. “Essential workers never got to work from home, even as the cases skyrocketed and outbreaks were commonplace. I would really like to see the City Council actually working for the good of all the people rather than the good of property owners and business owners.”

Some residents went on to accuse hesitant councilmembers of sympathizing with the CEOs of large corporations.

“Do not make excuses for corporations that have made record profits on the backs of the workers,” resident and essential worker Victoria Patterson said in a public comment. “Thank you in advance for making the right choice and I hope you do.”

In the end, all five Councilmembers voted to approve the hero pay measure. The ordinance is effective immediately and the Council will reevaluate it for potential extension in 45 days.