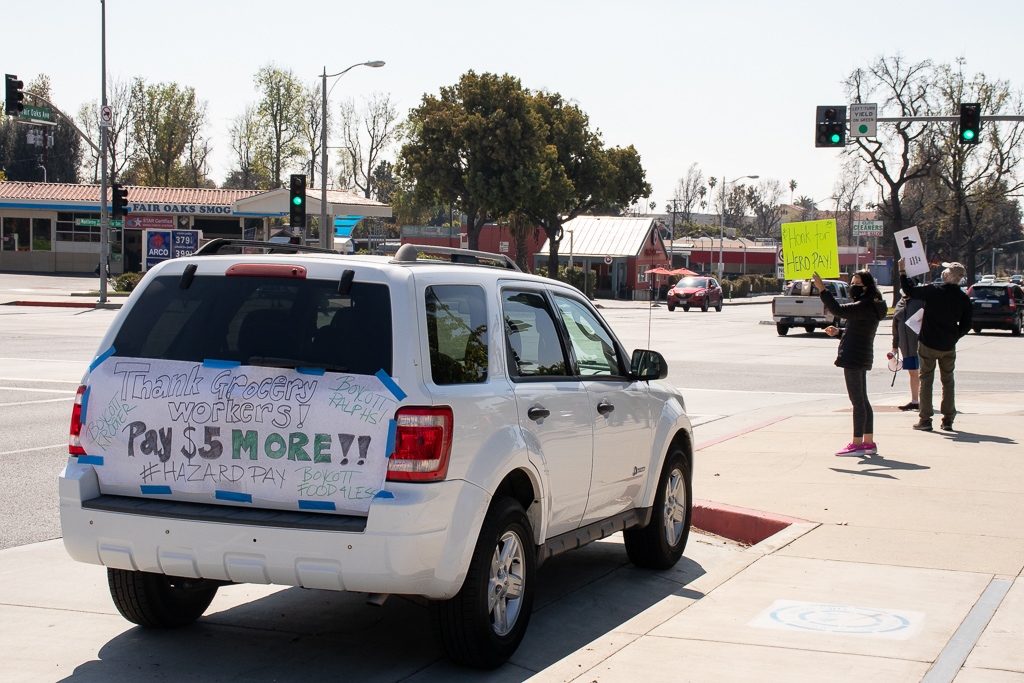 Residents leading a local rally for a hero pay ordinance last month achieved success at Wednesday's Council meeting when city leaders authorized the drafting of the temporary legislation. However, activists had been pushing for a $5 per hour raise for grocery store employees, which Councilmembers reduced to a $3 an hour bonus.

The City Council unanimously approved the creation of an emergency ordinance requiring large grocery companies to temporarily increase their employees’ wages by $3 per hour, at its meeting on Wednesday, Apr. 8. This “hero pay” ordinance will compensate grocery workers for the dangerous and essential jobs they have undertaken during the coronavirus.

This pay applies to non-managerial employees in retail, grocery, and drug stores of which there are six in South Pasadena: Pavilions, Vons, Ralphs, Trader Joe’s, Grocery Outlet, and Bristol Farms. The ordinance is planned to force the corporations to increase their employees’ hourly wages by $3 for 60 days, beginning upon adoption.

Locally, residents and grocery workers flooded the public comment of the Council meeting with strong support for the hero pay.

“What we went through during the heart of the pandemic, being open to serve our community, was something that I wouldn’t put upon anybody else,” grocery store employee Alec Zuno said. “Having hundreds of people daily going in through your line, not knowing if they were going to be asymptomatic and give us the coronavirus was really hard for us to take on, but we did; we were front-line workers.”

Many workers expressed that the wage increase would critically help them continue to pay for basic necessities.

“Not everybody in South Pasadena is wealthy; there are a lot of single mothers like myself who are just getting by paying our rent and buying things for our kids,” a Vons employee named Anne said. “If [the City Council] could pass [the hero pay ordinance], it would be great for a lot of people including myself, we could rest a little easier, and not worry so much.”

In early March, a workers rights advocacy group gained community support for a local hero pay ordinance through a mass public comment and symbolic giving of groceries to the Councilmembers. Then on Saturday, Mar. 13, residents rallied in front of Vons and marched through South Pasadena to raise awareness for a local hero pay. Activists who were pushing for a $5 per hour wage increase expressed mixed emotions about the Council’s action.

“We were heartened to see so much support for a hazard pay ordinance among the grocery workers in our community,” community organizer Ella Hushagen said. “The recorded comments by workers at Ralphs, Vons, and Pavilions were very compelling. We think $3 per hour for 60 days is not enough, but it is something. We will continue to fight for it.”

Councilmembers Michael Cacciotti and Evelyn Zneimer strongly supported the hero pay ordinance, asserting that the City needed to focus on the moral obligations it has for local employees.

“Many of us have been able to meet remotely like we are right now, but grocery workers and pharmacy workers have no choice. They have got to be there on the front lines, so I really support this initiative,” Cacciotti said.

However, Mayor Diana Mahmud argued that a hero pay ordinance would not include other workers who have not been able to work from home, such as Ace Hardware employees.

“I have considerable difficulty supporting the ordinance [because] essentially anybody that had a job that was not able to really enjoy the luxury of working from home faced difficulty,” Mahmud said. “For example, we have medical care provider employees, like doctors and dentists, that faced the same exposure. I really have a serious issue with being asked to essentially choose winners and losers, as I believe the passage of such an ordinance does.”

Cacciotti and Mahmud reached a compromise with the 60-day, $3 per hour increase. They plan to assess whether to extend it based on the state of the coronavirus and reopening within California after 45 days into the ordinance.

City staff will present the hero pay ordinance for a vote at the Council’s next meeting on Wednesday, Apr. 21, and it is expected to be passed and put into place immediately.

Photos of the Month – March