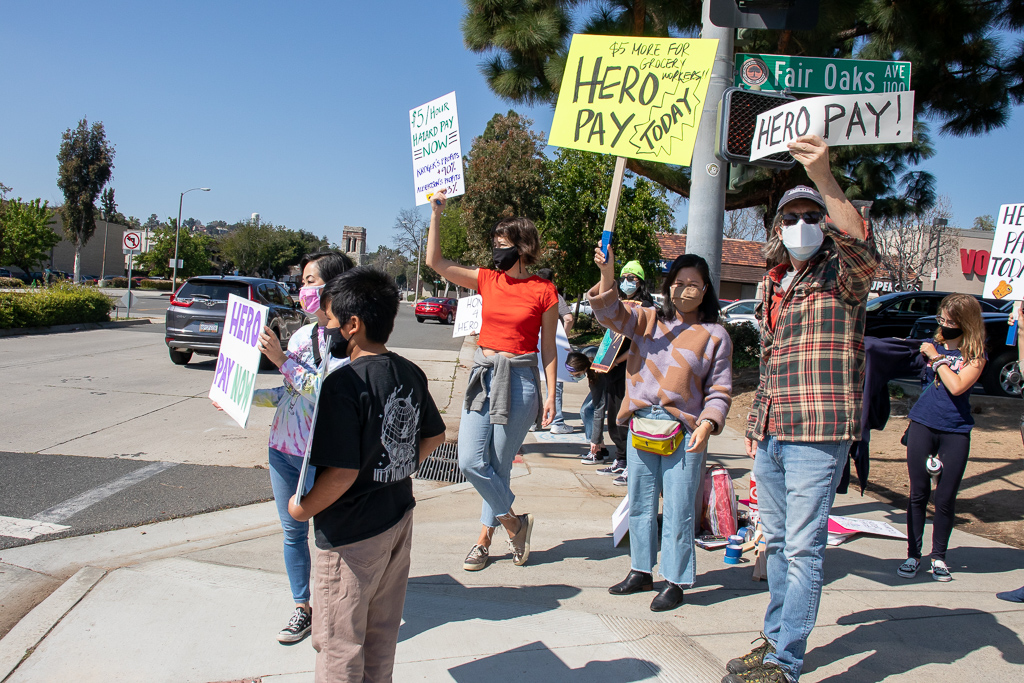 Local activists for a hero pay in South Pasadena were successful in getting the ordinance on the Apr. 7 City Council meeting agenda.

A group of about 20 community members rallied outside of South Pasadena’s Vons in support of a 120-day $5 per hour hazard pay ordinance for essential workers on Saturday, Mar. 13.

The rally began at about 10:30 a.m. in front of Vons and moved throughout South Pasadena and into Pasadena with the goal of raising awareness for the hero pay campaign. Protesters walked and drove, waving homemade signs, chanting with a bullhorn, and thanking frontline workers.

Those in support of the ordinance have pointed out that retailers have seen a large increase in profits during the pandemic, but continue to pay their front line workers the same wages despite their increased risk of infection.

“There was a strong sense of urgency [at the rally], as these workers already don’t make the money they deserve,” junior Levi Srebalus said. “An additional $5 an hour for the next 120 days is the least our local governments can do.”

Local activists had previously sent a community public comment to the City Council and delivered grocery bags to each Councilmember to raise publicity for their cause.

The City Council will discuss the hero pay ordinance at its meeting on Wednesday, Apr. 7.

Sophomore Kahlen Miao (she/her) is eager to start her first year as a staff writer. When not writing, she enjoys ignoring the fact that she should be practicing piano instead of pretending to have more homework.