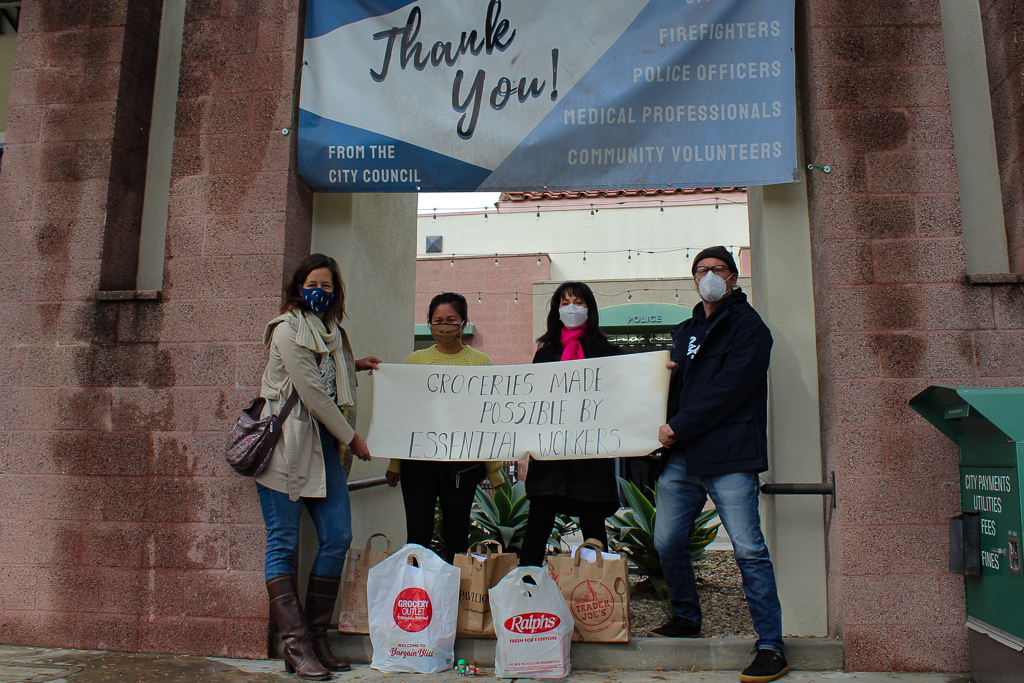 Nearly 150 community members signed onto a public comment advocating for a 120-day, extra $5 an hour essential worker hazard pay in South Pasadena at the City Council meeting on Wednesday, March 3. The leaders of the workers’ rights activism — residents Anne Bagasao, Helen Tran, John Srebalus, and Ella Hushagen — also delivered shopping bags full of food items to each of the five council members the day of their meeting, in an effort to raise awareness for the cause.

The proposed hazard pay only affects workers at grocery, drug, and retail stores that have 10 or more employees on-site and at least 300 employees nationwide. In South Pasadena, this would include Ralphs, Vons, Pavilions, Trader Joe’s, Bristol Farms, and Grocery Outlet.

Multiple cities in Southern California, including Los Angeles, Long Beach, Irvine, West Hollywood, and Montebello, have adopted 120-day hazard pay ordinances, also known as hero pay, in order to compensate retail employees for the added burdens they have undertaken while working during the coronavirus pandemic. Activists pointed out that while Kroger and Albertsons have experienced a respective 90 and 153 percent increase in profits in 2020, essential workers for these chains have been receiving the same wage — despite risking coronavirus infection every day.

“Retail workers are paid too little to begin with, given the hard work they perform and the importance of that work in all of our lives,” Srebalus said. “And now, in order to remain employed, they must assume mortal risk in high-traffic, high-contact positions. Large food and drug retailers have profited greatly from the pandemic, and it’s not only fair, but common sense, that the workers should share in those economic gains.”

There has been opposition to hero pay ordinances on the part of major retailers like Kroger, who closed two locations in Long Beach in response, and the California Grocers Association (CGA), who filed an injunction to overturn Long Beach’s law. However, Kroger’s decision was scorned by community members and public officials, and on Feb. 25, a federal district court denied the CGA’s legal effort.

Activists have also touted the hero pay ordinance as a way to address racial inequities during the pandemic.

“The COVID-19 pandemic has infected and killed Black and Latinx Americans at vastly disproportionate rates,” the joint public comment calling for the City Council to agendize a hazard pay ordinance for the March 17 meeting said. “The pandemic’s racial and ethnic disparities are caused, in part, by the heightened risk of infection to essential workers, such as grocery store workers who are more likely to be Black and Latinx. As South Pasadena addresses its history as a sundown town, it must consider concrete measures to remedy racial inequities affecting people who work here for low wages.”

At the March 3 Council meeting, Mayor Pro-tem Michael Cacciotti was the only local leader to acknowledge the hero pay advocacy, expressing an interest in an ordinance but not committing to it.

“Today I got a bag of groceries with raisins, green lentils, and little easter bunnies. I’m going to deliver it to Holy Family [Church]… Apparently it was donated by a grocers’ [rights] group… [and] over 100 residents signed to support that hero pay ordinance which will sometime be coming back to [the City Council],” Cacciotti said.

The advocacy leaders have reached out to Cacciotti and will continue to ask for a 120-day, $5 an hour hazard pay ordinance at the next Council meeting, whether it is on the agenda or not. They have called for the City to uphold its proclaimed values of supporting essential workers through legislation.

“South Pasadenans support essential workers. All over town, you see yard signs, and bottled water and snacks on porches for delivery drivers,” Hushagen said. “Joining ranks with all the cities that are requiring hazard pay [will] make that support much more meaningful.”