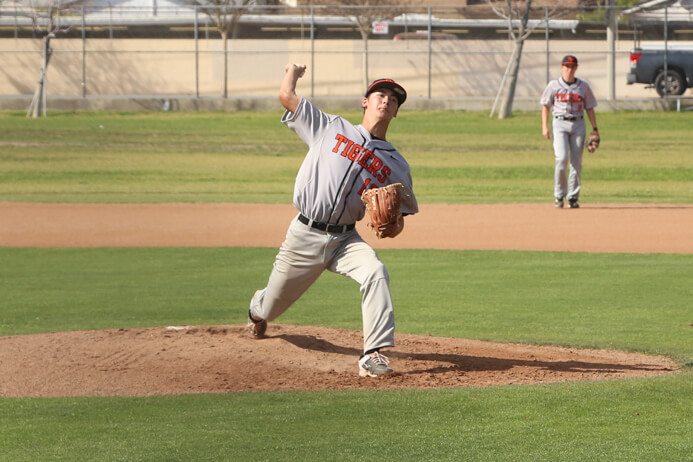 Varsity baseball dropped its eighth and final game of the preseason in a disappointing 4-2 loss to Rosemead High School, last Friday, March 17 on the Panthers’ field. With the loss, the team heads into league with a 5-3-1 overall record.

South Pasadena started off the match with two strong innings by senior pitcher Griffin Yamada. Limiting the Panthers to the bases, Yamada, along with solid solid defensive performances from the Tigers’ outfield allowed South Pas to keep the beginning innings scoreless.

Noah Miyamae hits the ball against Rosemead on Friday.

Offensively, South Pas struggled to connect with the Rosemead pitching. This would persist until junior Zach Howorth singled then stole second base to set up a scoring opportunity for the Tigers. Realizing the momentum they built, South Pas initiated a double steal to set up Howorth on third base and in position to score. Finally, junior Isaac Luevano hit a sac fly to allow Howorth to score, giving the Tigers a 1-0 lead.

Rosemead answered back in the bottom of the third to tie the game after a breakdown by the Tigers’ defense allowed the Panthers to score and tie the game at 1-1. The Panthers finally wore down Yamada in the fourth with two runs, followed by another run against senior relief pitcher Kevin Park.

The Tigers had trouble answering back in the sixth inning and only mustered up one more run coming from senior Noah Miyamae against the Panthers before the game ended in a 4-2 win for Rosemead.
South Pas hopes to shake off the loss before next week in the team’s first Rio Hondo League matchup against La Cañada High School, home, on Tuesday, March 22.