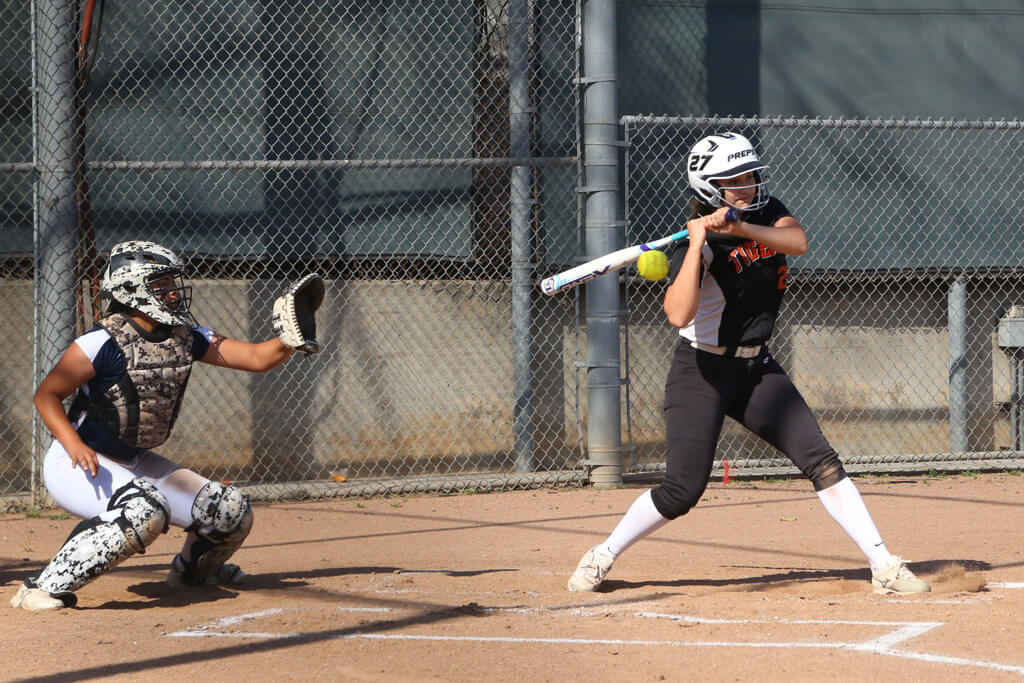 Despite a much stronger home game performance, the girls’ varsity softball team fell to the Alhambra Moors by a score of 15-6 on Thursday, March 16. The game fared much better for the Tigers as they brought a new energy to the field, contrasting their previous two mercies against Polytechnic and Schurr. Both defensively and offensively, the girls have gotten quicker and more efficient. This second-to-last preseason match places South Pas with a 1-4 season record.

The Tigers started the match hungry for success but immediately gave up three runs to the Moors in the first inning. Little mistakes accumulated, as errors from the infield and sophomore catcher Catherine Connolly allowed Alhambra to move around the bases and rack up points. But not all was lost, as South Pas responded with a run from junior Jackie Nguyen.

“Infield errors are what killed us this game,” Connolly said. “There were one or two innings where little mistakes ate us up, which allowed the margin to get so large. If we can cut down on our mistakes just a little bit it will help in making our games more competitive.”

The Tiger defense tightened up beginning with the second inning, in which they conceded no runs. Sophomore pitcher Katelyn Wooton performed consistently throughout the match, throwing accurate shots and striking out many batters. Senior shortstop Adriana Ramirez and senior first baseman Emily Swanson both played integral roles in thwarting the Moor offense. They played as a synchronized duo– Ramirez would intercept a bunt or low ball while Swanson would cleanly catch each and every ball launched her way which accounted for a majority of South Pas’ outs. The third inning brought about another Alhambra run, while South Pas was able to even out the score at 4-4 with runs from freshman Jewel Nguyen, Swanson, and an excellent slide from Ramirez.

Tigers lost control of the game in the fourth, as the Moors were able to set the score at 10-4.Alhambra tapped into their power at the plate, and the few misses on South Pas’ infield and outfield were the major factors of such a huge deficit. The Tigers scrambled in their attack, failing to strike back any extra points.

South Pas’ defense proved to be untouchable and phenomenal in its fifth inning, while the sixth and seventh spelled misfortune as Alhambra widened their lead by five points. The Tigers show massive defensive potential, yet simply need to work on their execution. One especially notable play came from Connolly in the outfield as she gracefully slid to catch a powerful Moor hit. The team couldn’t compete with the powerful Moors offensively, but came out stronger at the plate than any previous game, bringing the final score to 15-6.

“Honestly, I’m really impressed with the girls today, they showed up and played to their potential. They were giving their all straight off the bat, they were aggressive, on base, and helped each other out,” commented head coach Kayla Moore. “Everyone is slowly coming into their position– we’re still trying to find everyone’s niche, but they’re working hard and not giving up. That’s all you can ask for as a coach, as long as they are giving their 110 percent.”

The team has one more preseason game against the Mark Keppel Aztecs, away, on Friday, March 17 before they dive into league next Wednesday. The girls hope to learn from their blunders while maintaining the loud energy and aggressive offense displayed against Alhambra, growing into a major contender in league.