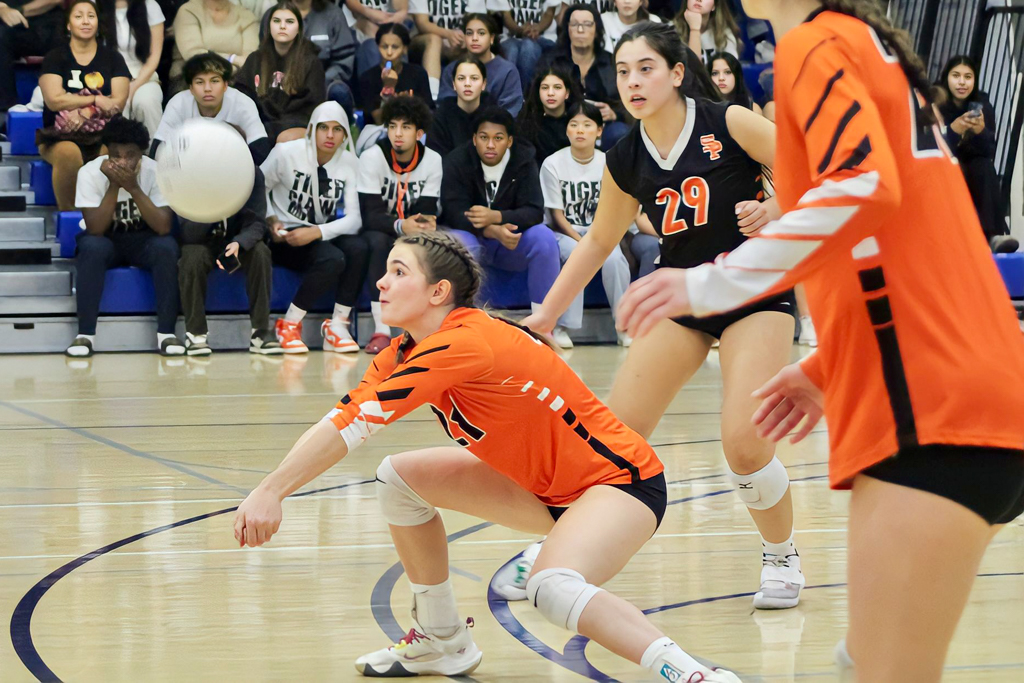 Girls Volleyball won 36 games this season and placed second in the Rio Hondo league, but lost in CIF semifinals on the road.

Girls volleyball fell short against the Alemany Warriors in the Division III CIF semifinals on Wednesday, Oct. 26, bringing the Tigers’ run to an end.

The Tigers stood second in line behind La Cañada in RHL play, with a league record of 8-2. Captains Ava Dorny, Jenna Garner, and Helena Foord led the team to victories in the first two rounds of CIF playoffs.

Despite 3-0 and 3-1 landslides against Cajon and Torrance, the Tigers were ill-equipped to battle the Warriors. Ranked #1 in Division III, the Warriors came into their home court with a 4-game winning streak.

After stumbling in the first set, the Tigers eyed a quick recovery. Instead, they were met with another defeat in the second. Unable to hold off the Warriors, the team fell into a 3-0 deficit. The match ended with scores of 12-25, 7-25, and 13-25, respectively.

The match was held at the Los Angeles Mission College East Campus. A school-issued ROOTER bus offered transportation for SPHS spectators. Despite the unfamiliar court, South Pas supporters populated the bleachers. The crowd held its breath as junior opposite hitter Ingrid Zahn began the contest by putting the ball into play.

With a clearcut, direct serve, Zahn gave way for a block from middle hitter Dorny, awarding the Tigers their first point. The opponents struck back with an ace. After an exchange of rallies, a series of aces from the Warriors forced the Tigers into a timeout.

Lagging behind 11-5, junior outside hitter Garner rose to hit a cross-net spike, only to be blocked by the Warriors’ middle hitter. While the team’s cohesion grew, the opponents’ defense strengthened. The Tigers couldn’t seem to find a hole in the Warriors’ formation.

The Tigers called a last-minute time-out with 22-11 on the scoreboard, but it was long overdue. The Warriors won the first set 25-12.

The second set began on a similar note, only less stagnant. Alemany picked up on momentum from the previous set, and gained a considerable lead right away. South Pas struggled to match the opponents, remaining over six points behind for much of the set.

Zahn shone on the defensive, making critical saves that afforded the Tigers pockets of time to regroup and set up for the next play. Trailing 17-7, the Tigers shied away from offensive plays and catered their focus to the defensive. Still, the opponents were too unpredictable. Before long, the Warriors took the second set 25-7.

The third and final set was characterized by turbulence. While Alemany claimed the lead from the onside, back-to-back aces from Garner revitalized the South Pas faithfuls, inspiring remnants of hope for a potential fourth set.

Despite losses from the first two sets, the Tigers resisted defeat. Instead, they hit with more power and confidence. Dorny and Zahn gave the Tigers comfortable footing with synchronous blocks, an effort reciprocated by the opponents.

South Pas tried to cut into the Alemany lead, but the effort was ill-received. Aces from the opponents unsettled the team, causing multiple reception errors. More so, the team struggled to find weaknesses in the opponents’ defense. With 16-8 on the scoreboard, South Pas’ offensive endeavors fell flat.

The Tigers’ attacks were blocked by a wall of Alemany defenders; Successful spikes were few and far between. The Warriors’ dominance sustained through the final rallies. Soon enough, opponents brought home the third set 25-15, leaving the Tigers winless overall.

“I know they did what they [could], but at the end of the day, I know that they could have done a lot better,” said head coach Ivy Chew. “One thing I want to give to them is that they never gave up, even in the last set. They could have walked off and just let [Alemany] take it. But they didn’t.”

Despite setbacks in the final match, girls volleyball had nothing short of a remarkable season. The team leaves the court with a 36-9 overall record and looks to build on this success in coming seasons.

“I’ll miss the team, [especially] having Ava as my senior…This team is different. They give so much heart. And that’s something I’ll really miss,” Chew concluded.