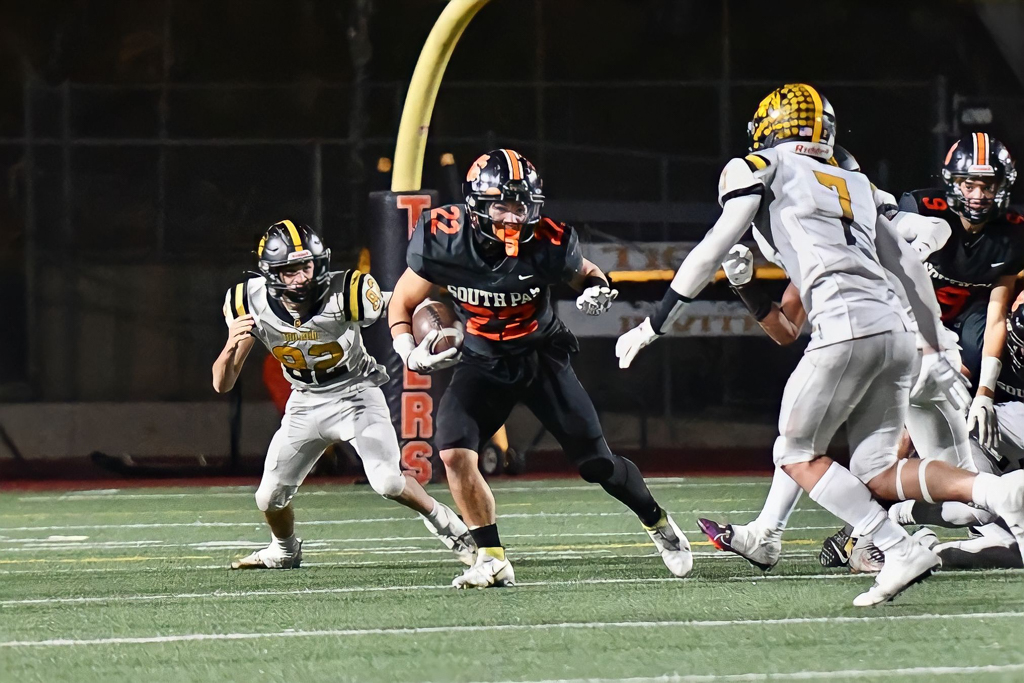 Junior running back Jason Hong, (22), ran for 308 yards and four touchdowns to lead the Tigers to a victory in the opening round of CIF.

Football pummeled the Yucca Valley Trojans 43-35 on Friday, Nov. 5, winning the first round of CIF on its home turf. The Tigers offense was led by junior running back Jason Hong. Hong overwhelmed the Trojan’s defense and refused to be tackled; ultimately contributing four of the five touchdowns and over 300 yards from scrimmage.

Fans filed in to watch the Tigers compete in an elimination game. South Pas began the game on offense and senior wide receiver Richard Conti returned the ball to the 40-yard line. On the first play, senior quarterback Jackson Freking connected with junior wide receiver Elijah Garcia for a first down. Hong moved the chains with a powerful run before Freking found senior wide receiver Quinn Sterling wide open in the red zone. On second down and goal, Hong fought for every yard and barrelled into the end zone for a touchdown. The Tigers made a statement on their opening drive, taking a 7-0 lead.

Yucca Valley was prepared with a response. After a holding penalty, a Trojan wide receiver was lost behind the secondary. The pass was on point and the wide receiver was gone, sprinting into the end zone to tie the game. The 60-yard score put the contest at 7-7.

On the next play, Garcia fumbled the football and a Trojan defender was there to recover it. With extremely favorable field position, Yucca Valley picked up yardage on the ground and then scored a touchdown on a slant. The Trojans had taken a 14-7 advantage midway through the first quarter.

Sterling came down with a leaping catch and blazed over the middle of the field to set up the next Tigers drive. Hong did the rest, plowing ahead and making defenders miss until he was standing in the end zone with his second touchdown. The Tigers had answered, tying the game at 14-14.

The second quarter began with the first punt of the game. Yucca Valley gained yards over the middle of the field and the Trojan quarterback somehow eluded a sack and scrambled for a first down, but the effort stalled out and Yucca Valley punted plays later. After picking up a key stop, Sterling caught a pass and Hong ripped off another first down run. Senior running back Matthew Takasugi pushed ahead to set up the drive, and Hong finished it off with his third touchdown. The Tigers had regained the lead, 21-14.

Yucca Valley was forced to punt after an incompletion and a sack by sophomore defensive end James Dowd. South Pas was given an opportunity to take a multi-possession lead as halftime approached, and Hong continued to deliver. Hong weaved past the defense, cutting in, out, and past Trojans. His unstoppable physicality and quickness landed the Tigers yet another touchdown. The score stood at 27-14 late in the first half.

South Pas started pulling away with a perfectly executed two-minute drill. It started on defense, where a pass was deflected and intercepted by junior cornerback Harrison Farley. Sterling and senior wide receiver Richard Conti then each made catches, but, at the 20-yard line with only five seconds left, it looked as though the Tigers would have to settle for a field goal. However, coaches Jeff Chi and Jason Barnes had other plans, dialing up a trick play. With Conti at quarterback, the play seemed to be heading towards the right side of the field. But Conti reversed and threw the ball across his body to wide open senior wide receiver Nick Eshom who walked untouched into the end zone for a touchdown. The Tigers extended the gap, taking a 34-14 edge into halftime.

After the final band halftime performance of the year, second half action resumed. The Trojans came out with a strong drive, starting with a big return into South Pas territory and ending with a hurdle on a touchdown run. Yucca Valley cut into the deficit, trailing 33-21.

Junior tight end Sawyer Fox’s catch-and-run gained South Pas yards. Freking found Sterling for a first down and the Tigers were marching down the field. However, South Pas would have to settle for a field goal, and senior kicker Aidan Kinney nailed the kick. With four minutes left in the third quarter, South Pas led 36-21.

Yucca Valley, eyeing the clock, decided to take a shot to the end zone. The risk paid off. From midfield, the Trojans quarterback unleashed a spiral to the corner of the end zone where the wide receiver made an unbelievable leaping catch, securing the ball and scoring a touchdown. Yucca Valley was clawing back, trailing 36-28.

South Pas sensed Yucca Valley’s comeback starting to gain steam, and let Hong put an end to it. The Tigers running back dodged defenders and could not be brought down, putting on a clinic with 20 and 30 yard runs. His fourth and final touchdown of the night sealed the victory with nine minutes remaining.

Junior cornerback Luke Riffle broke up a pass near the sideline on the next drive. Junior defensive end Thomas Carter registered a sack to push back the Trojans offense. Yucca Valley’s offense had resorted to desperate heaves down the field, but one pass finally connected and the Trojans trimmed the deficit with a touchdown. The Tigers were still in command with a 43-35 advantage.

The Tigers would run out the clock and Hong added more yards to his electric stat line on the night. South Pas won by a final score of 43-35, advancing to the second round of CIF. Hong’s performance and timely stops propelled South Pas to victory. After an 8-2 season and CIF-opening win, the Tigers will look to add to its sensational run next week, Friday, Nov. 18 at St. Margaret’s High School.