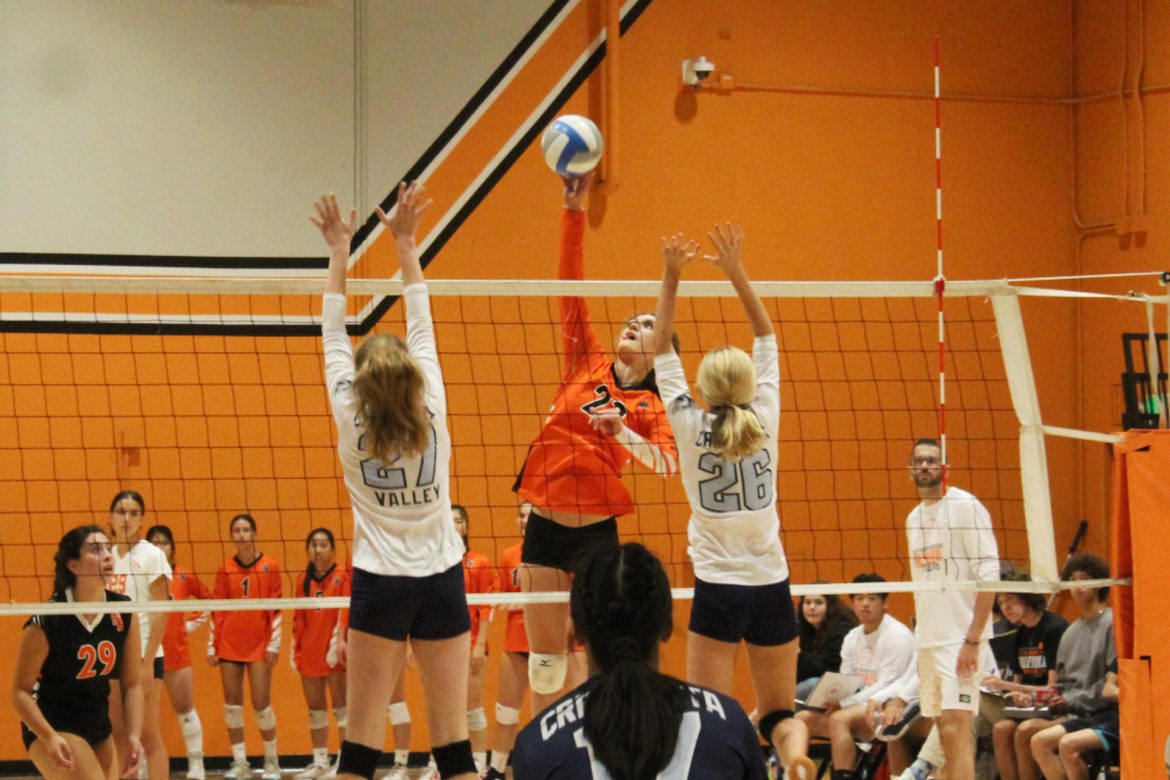 Junior Jenna Garner (23) led the Tigers' potent offense to a victory over the Crescenta Valley Falcons.

Boasting a 11-1 record and first place in the Rio Hondo League, girls volleyball edged out the Crescenta Valley Falcons on Tuesday, Aug. 30 in four nail-biting sets. The two teams fought neck-to-neck for much of the first two sets, bouncing back from a narrow 29-27 loss in the third set to win 3-1 over their opponents.

The beginning of the first set broke even for the two teams, indicating an equilibrium between the Tigers’ explosive energy and the Falcons’ defense. Junior hitter Jenna Garner slammed powerful spikes, many of which earned the Tigers points on the scoreboard.

Despite the Tigers’ efforts, the match was close. With the set tied 11-11, junior hitter Ingrid Zahn put an end to a long rally with a commanding kill that sailed past the diving opponents, which secured another point for the Tigers.

Seeing the slightest hint of a Tiger lead, the Falcons hurried to make up the difference. The two teams contested for the lead, the crowd erupting in cheers as both teams made crucial plays. However, the Falcons’ efforts were in vain, as the Tigers’ steady teamwork closed out the first set with a 25-20 win.

The buzzer marked the beginning of the second set. Revitalized by a long and thorough team huddle, the Tigers were eager to extend their winning ways into the second set. However, a series of Tiger errors propelled the Falcons to an early advantage, leaving them scrambling to recoup.

As junior Mia Ramos and Garner sustained rallies with important digs, often diving near the end line, the Tigers slowly cracked into the Falcon lead with 17-16 on the scoreboard.

Hoping to pad their newfound lead and close the second set in their favor, the Tiger initiated a series of long rallies. Senior captain Ava Dorny assisted Zahn and Garner as they made powerful kills to narrowly win the second set 25-23.

Junior Helena Foord led the Tigers’ attack as they began the third set. While the Tigers took an early edge and tried to extend their lead, the Falcons were not far behind. Each Tiger point was met with a corresponding point from the Falcons, as the teams battled in a competitive third set.

Trailing 22-19 late in the third set, the Falcons initiated an unexpected turnaround. After leaving the Tigers’ defense dumbfounded with a perfect spike, the Falcons took advantage of the Tigers’ miscalculations to win three more points, putting the teams even at 22-22.

The set came down to the wire. Led by Foord, the Tigers managed to establish a two point lead, putting up a score of 24-22. The sound of suspenseful drum rolls echoed across the gym in anticipation for the game-winning point.

The stands quieted as the point went to the Falcons. Another back-and-forth point brought the two teams to a deuce. As the crowd got up on their feet, swaying and ducking as the ball sailed through the air, the players remained laser-focused.

A successful kill by Garner secured the Tigers another point. Just as it seemed like they neared the end of the tunnel, the Tigers’ hopes were shut down by a Falcon rebound.

The third set stretched on as both teams added to their scores. Amidst the cheers from anxious teammates and enthusiastic supporters, the Falcons managed to score another point, leaving the Tigers scrambling to follow suit. Despite their best attempt to recoup, the Tigers ultimately fell short as the Falcons picked up momentum to close the set with a nail-biting 29-27 finish.

With a record of 2-1 in the match, the fourth set was crucial for the Tigers. They began on the right foot with an early 8-2 lead. Both teams had their share of errors in the fourth set, but the Tigers quickly recovered against their weakening opponent.  Junior setter Kendall Taylor assisted Garner and Foord as they made critical blocks in the offense, while Ramos fueled rallies with vital digs.

An ace from Dorny wore down the Falcons’ confidence, giving the Tigers  a comfortable 20-16 lead. After a series of Falcon errors, the Tigers came out of the fourth and final set with a 25-21 win.

“I think as a team, this is a good game to work on how to push through a slow start and work harder together…,” Garner said. “Going into [the RHL], I’m very confident in my team. I think we can take the win against La Cañada, which is what we really want. Overall, we are getting better and better [each game], so I’m excited for the [rest of the] season.”

Girls volleyball will face the La Salle Lancers at an away game on Thursday, Sep.1.