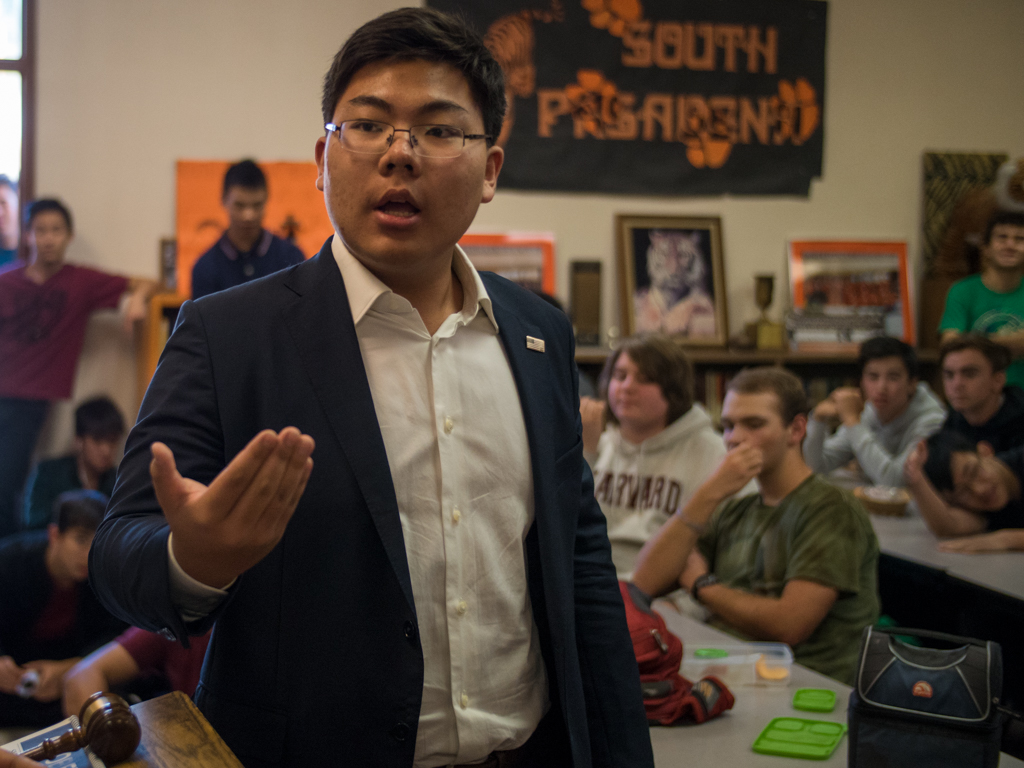 Politically curious students poured into the SAC room on Friday, October 13 during lunch to attend the student debate over President Donald Trump’s repeal of the Deferred Action for Childhood Arrivals (DACA), which provided work permits and amnesty for children of undocumented immigrants. The debate, the first one of the year hosted by the Tiger Talks Club, pitted junior Charles Li against sophomore Evan Kowal. Li argued to defend Trump’s repeal of the policy, while Kowal opposed him in support of DACA.

The debate began with moderator senior Alex Gallardo giving each of the participants a minute to make their opening statement. Dressed in a black suit with an American flag pinned to his lapel, Li posited that criminals were able to take advantage of the protection of DACA. Kowal followed with his opening statement, asserting that DACA recipients are major contributors to the economy. Kowal’s arguments garnered loud applause from the mostly liberal crowd that had tightly packed into the SAC room, while Li’s drew strong approval from a group of students at the north end of the room.

“Many people do have a criminal record. Many recipients lie,” Li said, before turning to other points of his argument for the repeal of DACA.

The debate continued with statements followed by rebuttals from Li and Kowal. The two students discussed multiple topics pertaining to DACA, including how the policy affects the job market and economy. The audience began to involve themselves in the debate, voicing their reactions and even asking Li to search through a pocket-sized Constitution. After one of Li’s statements ended, one audience member shouted out, “Yeah! Build that wall!”

“I want more young Americans to not be influenced by the liberal agenda we have at this campus, but rather for teenagers to realize that it’s important to put America first,” Li said.

After multiple verbal exchanges between Li and Kowal, students in the audience began to ask questions. Senior Hank Rainey asked Li to state facts to defend his points, and Mathematics teacher Ms Ruth Moonesinghe questioned Kowal about the morality of DACA. While the next debate is yet to be scheduled, secretary of the Tiger Talks club junior Akash Rathi says that there will be more to come this year.

“Needless to say, there will definitely be another debate in the near future,” Rathi said. “Our goal as a club is to promote empowerment, and to see that happening in our first event was promising for the future.”

Great way to stand up to the selfish Dreamers, many who are NOT good people & unneeded in OUR Country. They can blame their parents & the Democrat-Socialist Party for their predicament. Had their parents not violated OUR Laws, they wouldn’t even be in OUR Great Country. Parents are responsible for their children, Not American Citizens. Had the Democrats enforced past Amnesties, there wouldn’t even be any DACA or Dreamers. We need The WALL, Enforcement, NO Chain-Migration, NO Citizenship, NO Sanctuary cities, NO Future Dreamers or Amnesties, Mandatory E-verify. Reason we also need a WALL, is because future Socialist, Liberal Administrations could remove the Border Patrol, like Obama did.

“Had the Democrats enforced past Amnesties, there wouldn’t even be any DACA or Dreamers.” Are you saying democrats need to enforce amnesty? Amnesty means allowing to people stay so it seems like you are supporting DACA. “Reason we also need a WALL, is because future Socialist, Liberal Administrations could remove the Border Patrol, like Obama did.” Obama removed a border wall. Please find a factual piece of evidence that showed that Obama removed any kind of border security. Please look at this link that shows fact checks that Obama actually improved border security. Calling democrats socialist won’t stop illegal immigration. Also you said, “They can blame their parents & the Democrat-Socialist Party for their predicament. “ earlier you said the dreamers are selfish. Are you blaming the dreamers or the parents/democrats. Can you at least be coherent even if your facts our wrong?

If you have a problem with DACA please talk to Tiger Talks. I will be happy to debate you.