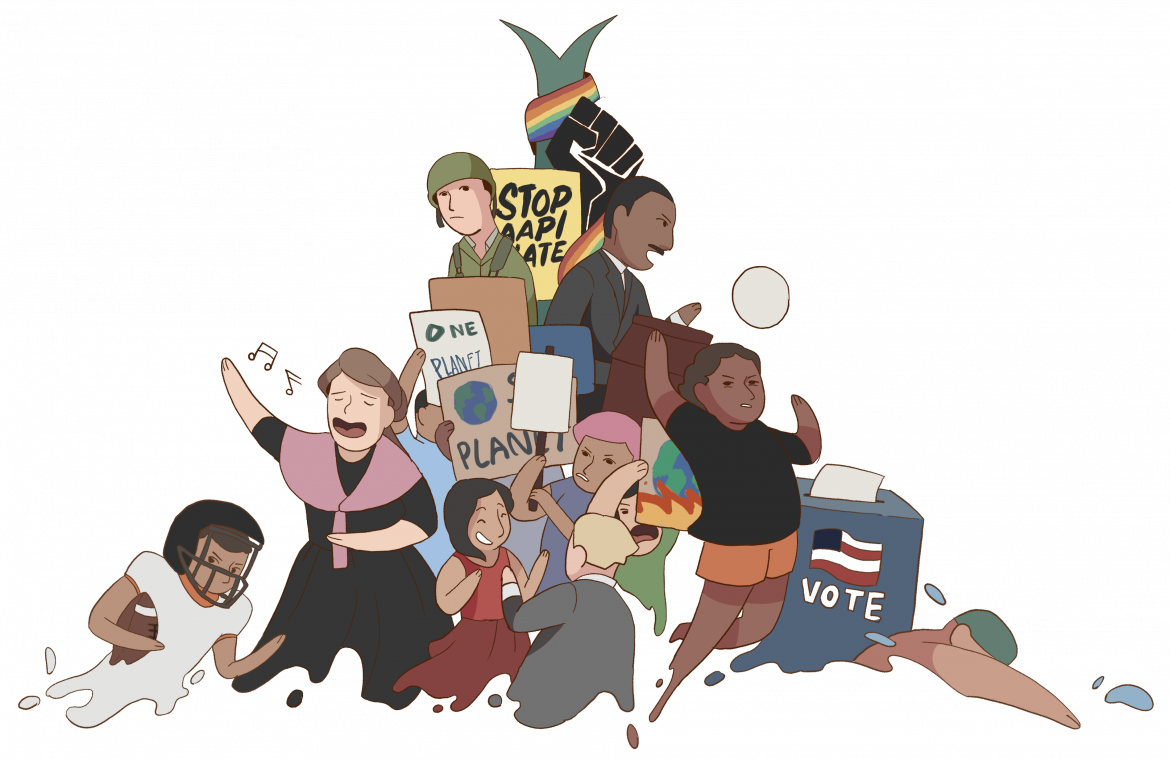 Part 1: Journalism is constantly evolving
Behind the clicking cabinet doors, hidden along the no-longer-in-use corners of the dark room, lie stacks and books of Tiger issue archives. The books, where our oldest archives lie, contain months of jumbled news and commentary turned mustard yellow by age, some issues so old that they crumble with a gentle turn of the pages.

I sat on the floor in the Tiger room next to my peers and excitedly flipped through each archive. We laughed at the outlandish headlines of the past and stared blankly at the supposedly comedic comics, assuring ourselves that they must have been funny at their time of print. I tracked the Boos and Bravos, one of my favorite Tiger traditions, and they made me realize that our lighthearted rivalry with the Copa de Oro dates back decades.

It would have taken too long to read every issue released since our founding in 1913, so we chose to look at years that hold historical significance to us: wars, the Great Depression, the Civil Rights movement, and the era following 9/11. It was interesting to see how the world wars and Vietnam War depicted in the archives differed from our own perceptions. We tend to view these wars as unceasing sequences of drastic change and violence because years of conflict are compacted into week-long history lesson plans that try to pick out the most important events. In the archives, however, wars were only briefly mentioned in the news section, with articles that barely exceeded two paragraphs. They advertised war bonds, posted articles in memoriam of an alumnus who had passed in combat, and alerted the student body that, during one particular year, summer school would be canceled because the SPHS football field would be used as an army camp. Wars are certainly talked about differently when one is living through it. Looking through past issues puts world and national issues into a realistic, day-by-day perspective.

Far more interesting than the war coverage in our paper was the long list of issues Tiger did not cover. Not a single article spoke of the assassination of Martin Luther King Jr., the Japanese Internment Camps, or even the story specific to South Pasadena in which nine-year-old Susan McClain was denied entry into the Municipal Plunge at Orange Grove Park because she was Black. The omission of these issues came as no surprise to me and the rest of the Tiger team. We are well aware of the history of racism that plagues this community. South Pasadena used to be a sundown town, there is a physical barrier between our city and El Sereno, and records of a 1940s initiative dedicated to preventing people of color from moving here “as a means of preserving value by maintaining the present racial character of the population” are detailed in the Dec. 26, 1941 issue of the South Pasadena Review. This is to say that Tiger Newspaper was not always so progressive.

Yet the overtly racist culture that engulfed SPHS in the past is the same culture that we see glimpses of when people put up posters with white supremacist dog whistles on the walls of campus buildings, or when South Pasadena City Council members delay the painting of a positive Black Lives Matter mural indefinitely. It is this culture that no doubt influenced the lack of critical journalism we noticed in the archives. However, it is these faults in our past print issues that make us so proud to be part of a student-led publication, in which it is inherent that the paper changes as we do. We now cover important issues regarding race, sexuality, gender identity, and economic disparity. Tiger Newspaper being a student-led publication will always hold value because it paints a clear timeline of the way the opinions and values in this community have developed. This paper criticizes the malicious standards of exclusion we have in this community despite perpetuating those exact standards in the past. The only way for Tiger to continue to thrive is if it remains a collection of uninhibited student voices, driven by social responsibility and a thirst for progress. More than tradition, the heart and soul of Tiger is change.

Part 2: Tiger must remain student-led
In front of the entire Tiger staff last Wednesday, Tiger’s advisor (legally on file as Tiger’s teacher) projected a Google Slides presentation about her vision of Tiger. Before she began, she set some ground rules, which included some unsettling directions to contain our emotions and listen respectfully to avoid the consequence of receiving a grade reduction or eventually being sent to the main office if such a warning to be respectful were to be ignored. The grade reduction would be taken from a proposed addition to our grading rubric called the “cooperation” grade, worth 20 points, and solely determined by her. That presentation, combined with numerous grievances this school year, have prompted the editorial team to speak out against what we believe is a series of changes that are threatening the integrity and quality of Tiger as a school and community publication.

In a broader democratic context, newspapers are watchdogs. They are integrated into the relationship between the people and the government to uphold truth and necessary outside perspectives into the public bloodstream, no matter how disruptive they may be. School newspapers serve this same vital function. To extend the metaphor, the administration is the government and the student body is the American public. Tiger is a community voice that speaks to the student perspective. We can bring the actions or decisions of administration into a public forum where high schoolers are empowered to examine the systems in place critically. For this symbiosis of information and critical thinking to continue, it is crucial that the power of a newspaper remain separate from the authority of the body in question — the government, or school administration — that it reports on.

This journalistic autonomy remains largely true in terms of American democracy. The government can intervene by way of suing publications for publishing libel or slander because that is a violation of the First Amendment. However, the government cannot sue The New York Times for publishing information smuggled from the apartment of a Defense Department analyst because it was neither libel nor slander, as exemplified by the Pentagon Papers in the case of New York Times Co. v United States.

Within the SPHS ecosystem, the newspaper-administration relationship is more intertwined. Ideally, in adherence to professional journalistic standards, the administration and our advisor should only intervene with the operation of Tiger when we are at risk of committing a violation of our First Amendment rights by publishing something libelous, slanderous, or obscene that puts the school at risk of being sued.

Our former advisor left his position at the end of the 2019-2020 school year due to unforeseen circumstances, and after a quarter of a year with an interim advisor, our current advisor, Karen Hames filled his role. Throughout this school year, the editorial staff has been at odds with the transformation of the advisor role unfolding before us.

We have found ourselves in a situation where a new advisor has, in no uncertain terms, been hired by administration explicitly to be more involved. “Involved” is a broad word with complicated implications that we, as an editorial staff, along with Ms. Hames, have had a difficult time defining. Specifically, we have had trouble reconciling more “involvement” with ensuring that Tiger remains a truly student-run publication.

Tiger has historically had a contentious relationship with school administration, so it does make sense that, when given the opportunity, administration would choose to hire a more “involved” advisor. Multiple times Tiger has covered the administration’s Title IX violations, white supremacy scandals on campus, the suspicious involvement of school resource officers on campus, and numerous events in which the administration has mishandled a situation of sexual misconduct between faculty and students.

Ms. Hames cannot be faulted for doing the job the administration hired her to do. We do not wish to condemn her intentions, only to comment on the effects these changes will have on the storied legacy of Tiger. Now, an advisor is not just someone who defends Tiger in difficult conversations with campus authority figures — which is an area in which Ms. Hames’s failure has directly led to an environment in which staff writers do not feel comfortable covering controversial issues — but someone with the power to restructure Tiger as a class at the expense of Tiger as a publication.

Per the rights granted to us by  California Education Code 48907 and upheld by the Student Press Law Center, the students have complete control over the content Tiger produces. Ms. Hames insists, however, that the structure of the class and the logistical ins-and-outs of the paper, such as working outside of class, grading, and choosing editors for the next year — all of which directly impact the content we produce — are under her control.

As Tiger’s editorial team, we take great pride in leading a nationally award-winning publication that is valued by the community. Tiger is more than a credit-earning elective or a laboratory for developing workplace and life skills. To many in our community, it is one of the most reliable local news sources. This is a responsibility Tiger staff treats with a great deal of respect, which is why we now feel compelled to use our power to protect the integrity of this paper as a student-led publication. We are not publishing this information in retaliation or out of spite. We value our connection to the people of this community, and because they support us, we believe they are entitled to be informed about the state of Tiger today.

Senior Quinn Manzo (she/her) is wildly excited to spend her second and final year of Tiger as Print Managing Editor. She hopes to encourage boldness and open expression and help each staff member pursue their personal best.