The Class of 2020 sends nine athletes to the collegiate level 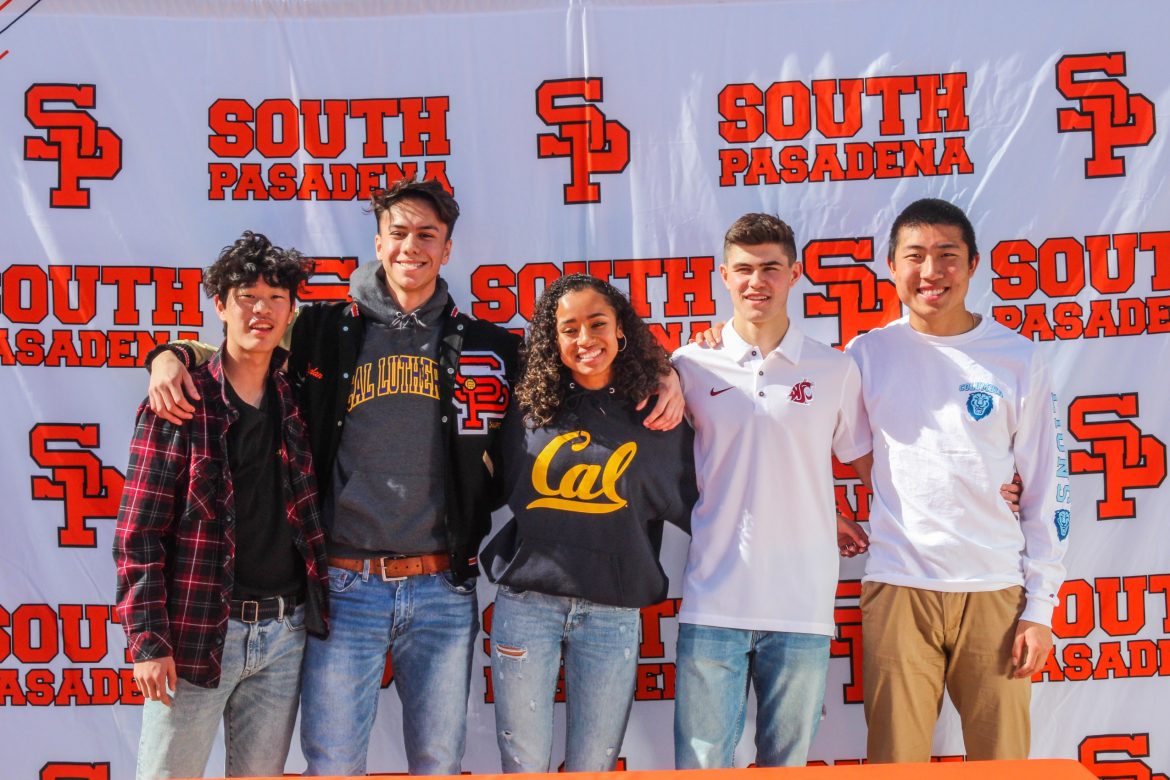 SPHS athletes tirelessly train throughout their high school careers, shooting for championships and deep CIF runs. The Class of 2020 boasts a wealth of athletes who have surpassed those goals and turned their sights to another: college competition. With multiple Division I athletes and a variety of track stars, this year’s senior commit class is one of the largest in recent memory.

Gianna Beasley
Senior Gianna Beasley committed to UC Berkeley for track and plans on studying psychology in the fall. After dominating the 400m and finishing first in every league dual meet last season, Beasley will move on and specialize in the 800m and 1500m events. After considering Duke and New York University, Beasley selected Cal because of its academic rigor and focus on athletics.

Andrea Castellanos
Andrea Castellanos will attend Texas A&M University on a full-ride soccer scholarship this fall, where she plans to study kinesiology. Castellanos transferred to SPHS prior to her senior year after playing for Nexaca, a professional team competing in Mexico’s highest division. The center midfielder often controlled the pace of play through her technical and tactical style, racking up eight goals during the regular season. Castellanos will bring her talents to the Aggies, who are ranked 14th in the nation.

Kat Castro
Kat Castro committed to Los Angeles Mission College for softball and will study human biology; she then plans to transfer to the University of Southern California. In her three years on varsity softball, Castro batted .305 in 22 games.

Kevin Kang
Senior Kevin Kang is off to the University of California Santa Cruz (UCSC) to study environmental studies and to compete on the track team. Kang competes in a wide variety of events, including the 100m, long jump, triple jump, and high jump. During league finals in his junior year, Kang set a personal record in the long jump of 21’ 10.5”. As UCSC specializes in environmental studies and offers a great location for research, it was a perfect fit for Kang.

“When I visited MIT there was a vibrancy and passion in everyone that was very palpable,” Kowal said. “I loved the collaborative atmosphere and was impressed by the [water polo] coaches and other players I met and the team’s supportive culture that prized excellence and teamwork.”

Billy Reed III
Senior transfer and SPHS basketball standout Billy Reed III plans to play at the collegiate level. He left his legacy on the SPHS program and was named to the Division 4A All-CIF Southern Selection Team. In league, he averaged 24.2 points and 9.8 rebounds per game, leading the Tigers to an 18-12 record and their first CIF appearance in five years. Reed is still undecided, but is primarily considering Cal Lutheran University.

“I picked Cal Lutheran for their family-oriented team,” Schreibfeder said. “When I [visited] it felt as if I was already a starting player on the team and that level of care was something I didn’t find at the other schools I was [considering].”

Lucas Tailin
After the track season cancellation, Washington State University offered Lucas Tailin a preferred walk-on position on the track team for pole vault. Tailin consistently performed well at meets throughout his high school track career and even reached State in his junior year after making a 14’9” jump at the CIF Masters Meet.

TH Wei
Wei announced his commitment to Columbia University for the triple jump and long jump last October after showing out at meets throughout his high school track career all while maintaining a 4.0 GPA. Despite suffering hamstring injuries in his junior year, he still managed to set a school triple jump record (48’0.25) and finished third at CIF State Finals.