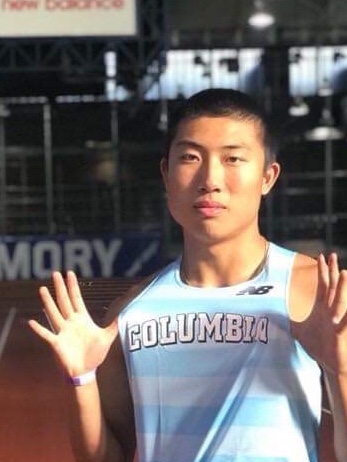 Senior Tianhao (TH) Wei announced his commitment to Columbia University on Saturday, Oct. 26, on Instagram. The track star, who is ranked third in triple jump in California, will enter undecided this fall and compete in the triple jump and long jump.

Wei is one of the top triple jumpers in California; he placed fifth in the triple jump at CIF State Finals as a sophomore. In his junior year, despite nagging hamstring injuries, he earned a bronze finish and set an SPHS triple jump record (48’0.25).

Not only does Wei possess amazing athletic abilities, but he is also a decorated student. He has been awarded the prestigious Dartmouth Book Award, a scholarship, received a scholarship from SongZhuMei, and was commended as a scholar by the National Merit Scholarship Association for his performance on the PSAT. Furthermore, Wei has maintained a 4.0 GPA, achieved a 1520 on the SAT, and scored a 5 on all his Advanced Placement tests.

He had pulled his hamstring during his junior year and thought he would not be considered anymore.

“Recruitment process was tough. I thought I was out of the game, but I was able to pull through,” Wei said. “A lot of my original colleges, like Stanford and UCLA, had coaches leave their program, so they stopped recruiting me.”

Wei also received offers from the University of Pennsylvania and Princeton, but chose Columbia because of its potential as an NCAA contender.

“I chose Columbia because I wanted to contribute to a growing track and field team that could be a formidable force in the NCAA in the future,” Wei said. “Honestly [the schools] all [satisfied academic and athletic desires], but I chose Columbia because of the track team and social scene. Columbia is in the middle of NYC so wherever I walk I bet I could see someone I could talk to and socialize. The networking there is also great. I will always have the track team as a family and the other new recruits are super cool.”

TH is considering a major in a STEM field, potentially in mechanical engineering, but as of now is undecided.

You sexy beast. You are the third ranked triple jumper in California. I am not :(