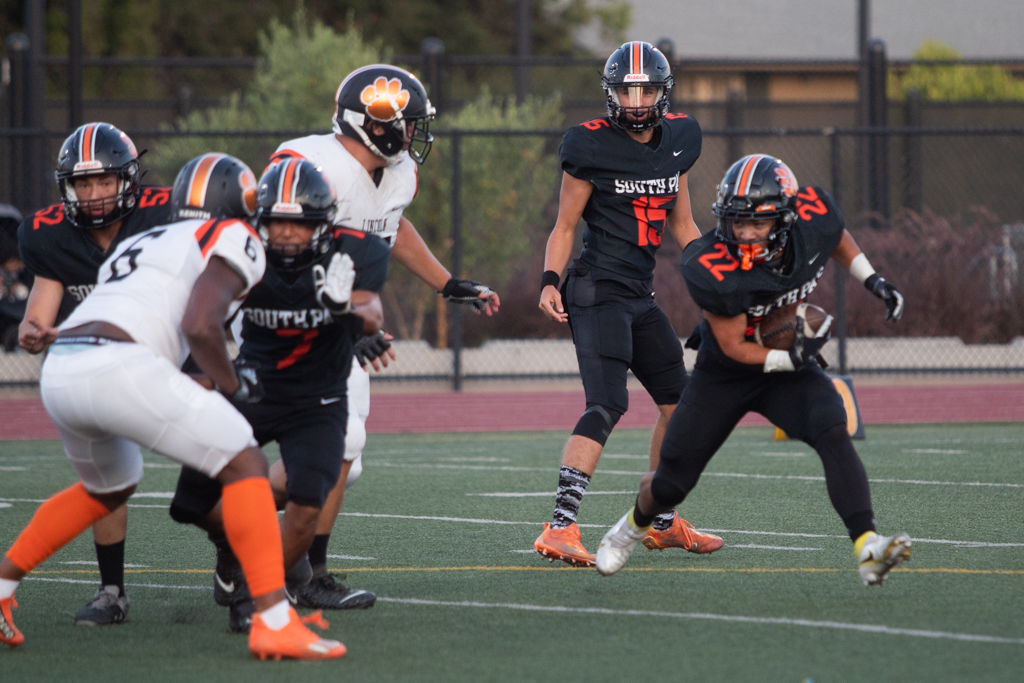 Quarterback Jackson Freking (15) hands the ball off to running back Jason Hong (22). Freking threw for three touchdowns on the night.

Football opened its season with a victory over Lincoln High School at a home game on Friday, Aug. 19. A strong offensive showing behind senior quarterback Jackson Freking’s three touchdowns and an emphatic defensive performance from South Pasadena converged in the 28-7 win. In front of a packed South Pas crowd, football delivered in their first game of the season.

As the SPHS Marching Band welcomed fans into the stadium, the team’s pregame warm-ups gave way to the opening kickoff. South Pas’s first defensive stand was indicative of their performance throughout the night. After two short runs and a pair of penalties by Lincoln, sophomore defensive end James Dowd batted down a pass and forced Lincoln to punt. Freking immediately found his footing on the team’s first drive, where he connected with senior wide receiver Richard Conti for two completions. Deep into Lincoln territory, Freking threw to junior wide receiver Sawyer Fox, who caught the ball in stride in the end zone. South Pas took a 7-0 lead midway through the first quarter.

Lincoln responded quickly, as their running back broke tackles on a long run. This set up the offense near the end zone. Their running back crossed the goal line and tied the game shortly after.

South Pas’s offense continued clicking, as Freking threw to Conti on consecutive plays. Conti will be a key target for Freking and a critical piece of South Pas’s offense. However, after a sack, the momentum stalled and South Pas punted. Lincoln would punt the ball right back, where South Pas was primed to take the lead. Junior running back Jason Hong unleashed a 20-yard run, and Freking threw to Dowd for a solid gain. Another reception from Conti had South Pas yards from the end zone, and Hong punched it in for the score. Senior kicker Aidan Kinney, who came up with timely kicks last season for South Pas, nailed the extra point and extended the lead to 14-7.

As the first half wound down, South Pas’s defense was just warming up. Tight coverage from junior cornerback Luke Riffle forced an errant throw, and Lincoln punted after a dropped pass. Senior wide receiver Quinn Sterling, who flew throughout the field with strong tackles and special team plays, made his presence known on offense where he hauled in a pass and spun away from a defender for significant yardage. Freking targeted Sterling again on the next play, and he came up with a tough catch in traffic between Lincoln defenders. With less than a minute left in the first half, Freking tossed the ball to Dowd for a touchdown. Kinney converted the extra point and South Pas had a two-touchdown lead by halftime.

The SPHS faithful settled back into their seats as the second-half play began, and it began with a bang. Freking found Fox open down the field for a 30-yard gain. After two short runs, Freking lofted a pass to Dowd who used every inch of his 6’6’’ frame to bring down the ball. After making the catch, it was a footrace to the end zone between Dowd and a Lincoln defender, and Dowd went on to score the touchdown.

“The linemen were amazing. They made sure [Freking] could throw, they made sure we could run the ball which opens up the pass,” Dowd said. “[On the touchdown] [Freking] delivered a dime to me…I just caught the ball and ran.”

Freking delivered a perfect pass to Sterling who made the catch leaping above one defender and wrestling the ball away from another. Conti came up with a grab of his own, but South Pas punted. Sterling’s special teams play pushed Lincoln to their own one-yard line, but they were able to work out of their own territory after a strong gain. In the next play, however, junior linebacker Giovanni Cruz crushed any hopes of a Lincoln comeback with an interception. Up 28-7 midway through the third quarter, South Pas could taste the victory.

Hong and senior running back Matthew Takasugi moved the chains and Freking took off down the sideline for a gain. Sterling continued his dominance over Lincoln’s defense with a difficult catch, making the grab and bouncing off a defender. Lincoln was able to stop South Pas from extending its lead with a strip sack on the next play.

In the fourth quarter, senior free safety Jason Yipp jumped in the air defending his man and deflecting the pass, preventing it from ever reaching the Lincoln player. This athletic play caused Yipp to hit the ground hard, but he soon stood up to the applause of South Pas fans. The offense would not score again, but Conti’s leaping reception added to his already-impressive stat line on the night. South Pas would run out the clock and secure the victory, winning by a final score of 28-7.

“To start off with a win [is] a huge boost of morale for the team…we are all feeling great right now,” Dowd said. “We just have to carry the momentum, have to look forward to every game, and we will see how it goes. Starting the season off 1-0, it [sets the tone] for the future.”

South Pas Football will travel to Maywood High School on Friday, Aug. 26 in hopes of securing a second win on the season.