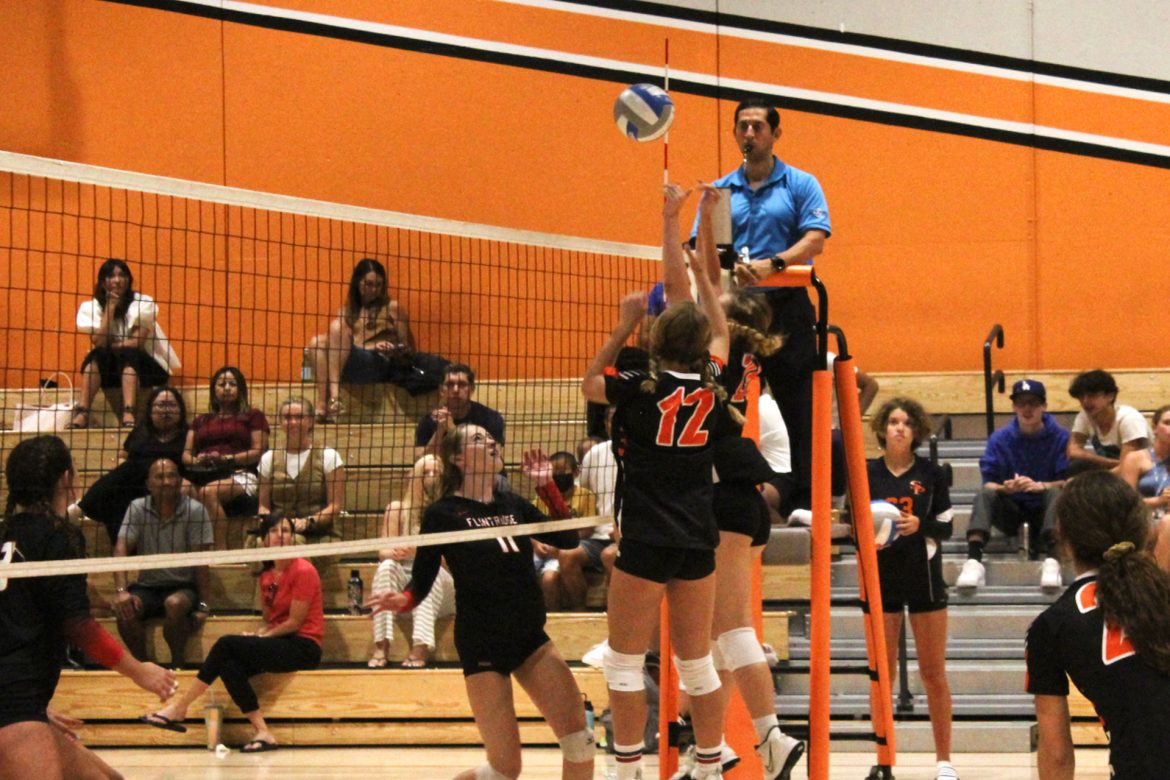 Girls Volleyball is off to a blazing start in the Fall season, having won nine of their first ten games.

Girls volleyball defeated the Flintridge Sacred Heart Academy Tologs at a home game in four sets on Tuesday, Aug. 24. After narrowly losing the first set, the Tigers bounced back to win three consecutive sets, securing a victory against the Tologs in its eighth pre-league match.

Invigorated by the loss, the team aggressively began the second set. An ace from junior libero Mia Ramos captured an early point, putting the Tigers in the lead. The Tigers’ coordination quickly caused the Tologs’ game plan to fall apart. Junior Helena Foord took advantage of their opponent’s crumbling defense and initiated a series of strong attacks, leaving little room for the Tologs to rebound. The second set closed with the Tigers dominating 25-12.

The energy in the gym was electric as the third set began. Both teams chanted cheers before resuming positions on the court. The Tologos responded in the third set with a strong effort, but could not outplay the streaking Tigers. Juniors outside hitter Jenna Garner and setter Kendall Taylor were among the many standouts. Ramos made crucial digs that kept the rallies alive, making vital passes to Garner and Taylor that set up the Tiger lead. The third set concluded victoriously for the Tigers as they slipped by the Tologs with a narrow 25-20 win.

The fourth and final set was marked by a foot shake celebration between Garner and Taylor, followed by a roar from the crowd. Garner scored the first point of the set with a strong kill that sailed through the unprepared defense. Ramos made a succession of noteworthy dives that sustained the rallies.

With improved communication and individual play, the Tigers put up a comfortable lead against their struggling opponents, who responded to the Tigers’ streak of aggression with errors. The lead was extended as Zahn spiked the ball past a diving defender, closing the fourth set with a 25-15 win for the Tigers.

“There are some things I feel that we should work on, but I feel like they’ve really picked it up…and will [continue to] get better as a team,” head coach Ivy Chu said. “Each day that we come to practice, I feel that we’re getting better as a team. I feel pretty good going into league as long as [everyone] doesn’t plateau.”

The girls volleyball team will face the Claremont Wolfpacks at their next away game on Thursday, Aug. 25.