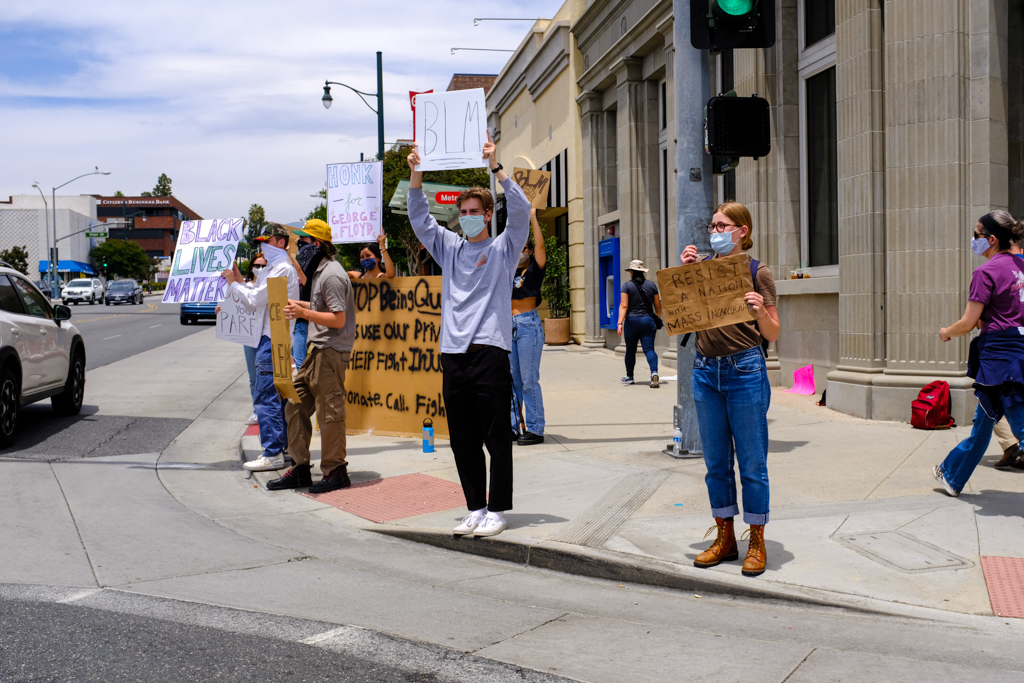 Local protests motivated the City Council to ban the use of the carotid neck hold as an acceptable SPPD restraint.

The officer-involved deaths of George Floyd and Breonna Taylor several weeks ago reinvigorated the Black Lives Matter (BLM) movement and escalated the cry against police brutality in communities of color across the country. South Pasadena resident London Lang, alongside fellow SPHS alumni, helped localize the protests which motivated many community members to rally together and stand with BLM the past week.

South Pasadenans of all ages congregated at the intersection of Fair Oaks and Mission, holding up signs to ongoing traffic with messages like “Black Lives Matter” and “Honk for George Floyd.” Despite the ongoing coronavirus pandemic making large demonstrations a possible public health concern, many felt that it was worth the risk to participate in the protests.

“Change happens in numbers,” rising junior Ava Page said. “I will not sit idly by and watch as black lives get taken by a corrupt system. It was beautiful to see so many people come out in support and I would do it again in a heartbeat. Change is now and protests are bringing the awareness needed.”

SPHS history teacher Annalee Pearson understood that the protests might facilitate the spread of the coronavirus, but felt that staying silent was inadequate.

“I was definitely apprehensive about attending the protest in the middle of a pandemic. However, like many others, I was horrified at the murder of George Floyd… I felt that staying silent would be complicit to that murder. I did not only attend the peaceful protest at Pan-Pacific Park on Saturday to speak out against the recent murders of George Floyd, Ahmaud Arbury, and Breonna Taylor, but to show my support for BLACK LIFE.”

Many of those protesting for Black Lives Matter were not black but still wanted to show their solidarity for the movement.

“I really went [to the protest] because I felt that I needed to take action,” rising junior Jillian Ran stated. “I definitely feel like I’m in a position of privilege as an Asian American woman… I’ve been born with privileges that black people can’t experience because of the racism embedded in the criminal justice system. So I really felt like I should be there to be an ally to black voices that needed to be heard.”

L.A. protest organizers have emphasized the demonstrations’ peaceful nature and sought to distance looting from the Black Lives Matter movement. But, many people have critized the police as the ones who escalate the protests with harsh tactics like tear gas or rubber bullets.

“Throughout these protests I’ve seen that the protestors are acting very peacefully and lawfully, but no matter what they do, the police are still reacting with violence,” Ran commented. “When I was going [to the protest] they purposefully made it harder to get to Pershing Square by not having the metro stop at that station. Also, setting the curfew to 6:00 p.m. when it was already 5:20 p.m. really seems like they were looking for an excuse to arrest people. It just seems like the government would rather silence black voices and incite violence rather [than] just reforming the system in place.”

The SPPD Chief Joe Ortiz declined Tiger’s request for an interview but provided a comment on the general state of the situation on Saturday, June 6. Chief Ortiz clarified that the organization — alongside most agencies in the San Gabriel Valley — were on tactical deployment.

“We have had two peaceful demonstrations over the weekend. Plans are in place in the event of protest activity,” Ortiz said. “We continue to monitor events related to protests and effects on the city and are prepared to provide mutual aid to surrounding agencies as needed.”

Families across the country are having to grapple with heavy discussions about police brutality and racism, with many realizing the importance of these conversations from a young age.

“I strongly believe in [Black Lives Matter] and I want to teach my children… that Black Lives Matter,” South Pasadena resident Gigi Gardoce said. “I feel like we’re always having the same issues [of racism]. We can’t move forward unless there’s real policy change in the government… It’s important for me to teach [my kids] this.”

South Pasadena School Board Member Zahir Robb echoed the call for education on racism and more diverse stories and perspectives.

“In our educational system, [we should be] looking at a diverse set of literature, looking at our real history and making sure that it’s presented in a light that people truly understand so that they can see that there’s multiple perspectives. [We should also] expand the opportunity for students to be exposed to a wide range of curriculum.”

Many local protestors hoped that the outcome of their collective presence would be real policy change to community law enforcement. Already, the demonstrations have proven to be successful in forcing government action. The City Council ended the usage of the carotid neck hold within the SPPD on Sunday, June 7.

“I was disturbed to learn that pressure on the carotid artery was an actual restraint,” City Council Member Dr. Marina Khubesrian posted on Facebook. “This reduces blood flow to the brain and induces temporary unconsciousness by reducing oxygen delivery to the brain. SPPD Chief Ortiz has been very responsive to concerns about this maneuver and the City has officially banned it.”

A newly formed activist group, the South Pasadena Youth for Police Reform, was encouraged by the City’s recent action but has drawn up a list of over twenty additional policy changes they are pushing the SPPD to make. The organization has planned its largest protest yet outside South Pasadena City Hall for Wednesday, June 10 at 6:00 p.m.