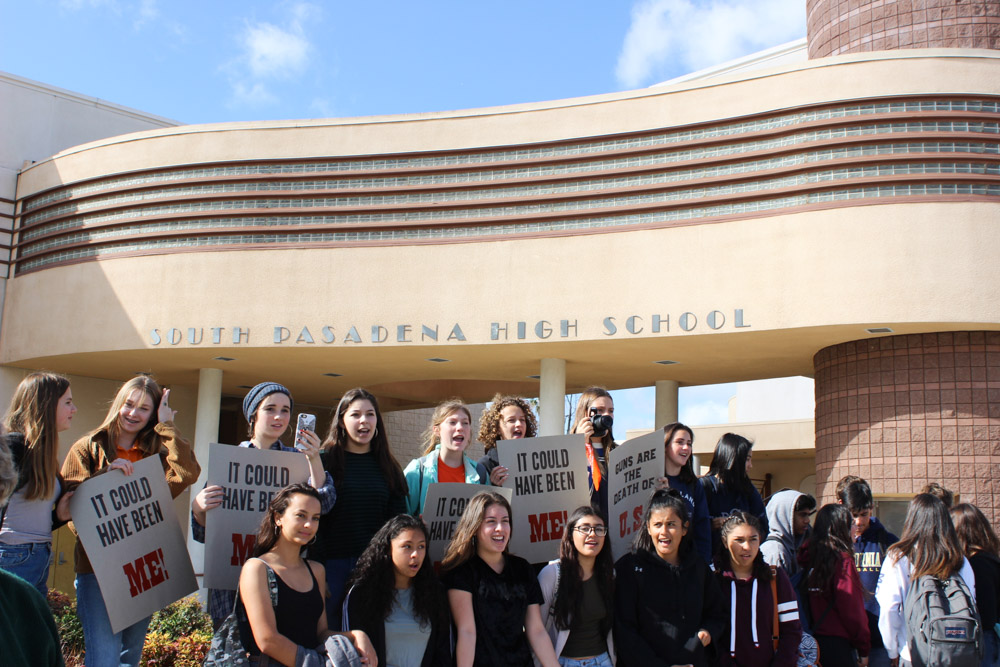 SPHS students line the perimeter of the school and chant anti-gun violence sentiments as they watch their fellow classmates finish the march.

Students toting signs and chanting anti-gun sentiments gathered in front of the SPHS campus on Wednesday, March 14 at 10 a.m. to demonstrate their solidarity with Parkland, FL students and to pressure legislators to prioritize gun control. The walkout lasted 17 minutes to memorialize the 14 students and 3 adults killed in the Marjory Stoneman Douglas High School shooting on February 14th.

An estimated 500-600 students rallied in front of the school and then marched off campus and up Fair Oaks Avenue toward Monterey Road. The South Pasadena Police Department blocked the roads to allow safe crossing for the large number of students.

Schools nationwide participated in walkouts of a similar nature as a part of the National School Walkout promoted by the Women’s March organization. Students partook in one minute of silence before returning to their third period classes.

“I full-heartedly support South Pasadena students and those around the nation for demanding gun legislation,” Khubesrian said. “It is time for a change and we are taking action.”

Seniors Sophie Reynolds, Kate Ba and Lauren Sharkey, along with several other classmates, assumed planning responsibility for the walkout and expressed their pleasure at the large number of students who participated in the walkout.

“We are not going to forget what has happened,” Reynolds said. “We are paying attention and we want to make change because we are future voters.”

Reynolds hopes to plan additional actions in the future supporting gun reform and encouraging students to register to vote.

I hope they do realize that in many cases where all guns were banned it never turned out well. In Nazi Germany, Hitler banned firearms and the people had nothing to protect themselves with. That is how he was able to remain in power. In England all banning guns did was accelerate knife crimes. High schoolers are very impressionable, and this is coming from a high schooler. If you want to save kids stop aborting millions of babies in late term abortions. Also, make it difficult to obtain firearms and say something before it happens. Ironic how liberals complain about unjust police shootings and then you turn around and say that we need to make the public be gun free and only allow police to have guns. So what is it, do you want to be vulnerable to the police or do you want to be able to defend yourselves? People will always be able obtain guns wouldn’t you rather it be legal than illegal? Besides, California has gun safety laws you’re walking for nothing.