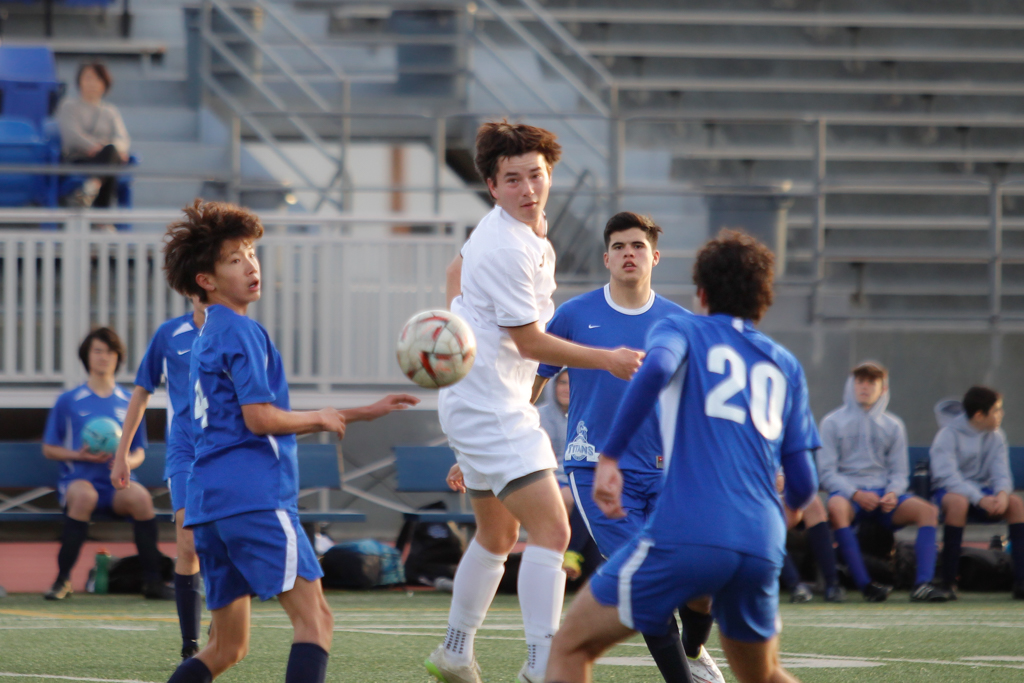 Overwhelming the Titans with a consistent offensive attack, the Tigers got out to an early lead and never looked back.

The Boys’ soccer team defeated the San Marino Titans on Wednesday, Jan. 18 at San Marino High School with a final score of 7-0. The Tigers maintained a strong lead over the Titans throughout the entirety of the match in their fourth league game.

South Pas started the game strong, gaining the upper hand with possession. They had a strong series of passes between senior center back Guss Eddy, senior right middle Oscar Cassidy, and senior center back Henry Fogel. The triad of seniors took the ball down the field and passed to senior left middle Myka Enamato-McLain who attempted to score a goal but missed the goal wide right. Senior center striker Tilo Andac bypassed the defense of the Titans to score the first goal of the game.

Junior midfielder Aidan Ogawa intercepted several passes from the Titans while they tried to regain their footing offense and scored the second goal of the match. Ogawa kicked the ball from the corner of the field which ricocheted off the post, ending up in the back of the goal. Coach Juan Zurita made several substitutions during the game including putting in senior defender Nathan Rodak for Enamato-McLain, Ogawa for junior left striker Joe Hwang, and sophomore midfielder Emilio Gonzalez-Mosqueda for senior forward Roddy Foley. Junior left back Evan Takeda-Teer scored the third and final goal of the first half. The Tigers held a lead of 3-0 heading into the second half.

The halftime break seemed to boost the Tigers energy even more. Senior center middle Shota Maekawa passed the ball to Ogawa which led to Makawa scoring the fourth goal of the match.

As San Marino captured the ball with skilled maneuvering and interceptions, Eddy hustled down the field to chase after the Titans and eventually regained control of the ball. With Eddy’s help, Cassidy then scored the fifth goal of the game. Gonzalez-Mosqueda attempted to shoot the sixth goal for the Tigers but was blocked by the Titan’s goalkeeper. With less than four minutes remaining, Hwang was assisted by Makawa’s and scored the sixth and seventh goals of the game. The match ended with a score of 7-0, with South Pas claiming a dominant victory.

“I think we played [well], but we should have done better against San Marino, not that they are not strong just that we were not connecting on our paths…” Zurita said, “The second half [of the game] [we] made the adjustments and were doing better and controlling more balls.”

The Tigers will face the Monrovia Wildcats on Friday, Jan. 20 at home in their fifth league game and 11th game overall.