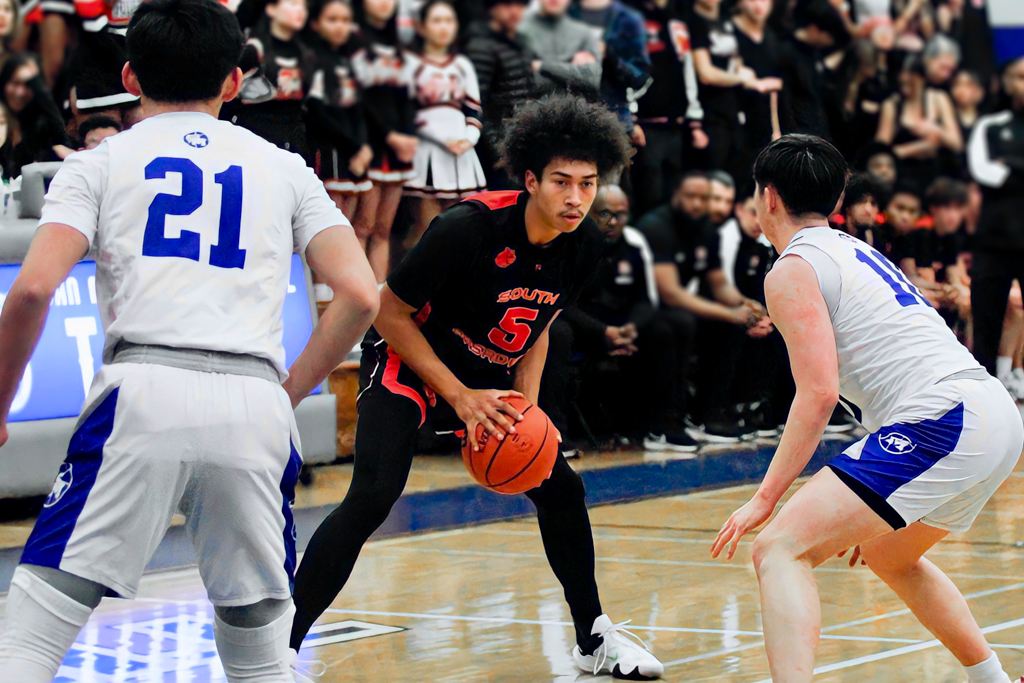 South Pasadena started out strong with quick passing followed by a shot from junior shooting guard Russell Williams for two points. Mark Keppel immediately responded with a quick two pointer in an exchange that set the tone for the first quarter.

Senior shooting guard and point guard Finny Ho racked up six points for the team with his deadly long-range shot. On the other side of the court, the Tigers managed to keep the Aztecs mainly on the outside. The scoreboard flipped between the Tigers and Aztecs despite brief periods when the Tiger’s lead grew to 4 points and it looked like they would pull away.

The Tigers showed their speed on fast transitions from defense to offense, but struggled to finish near the net, ending with a 5/15 shot conversion rate in the opening frame. The first quarter left South Pasadena on the heels of Mark Keppel who led 13-12.

Sophomore power forward Jack Madison recovered possession for South Pasadena in an impressive block that took place in the first few minutes of the second quarter. Madison scored in the following offensive drive to bring the Tigers point total up to 14. Williams then earned an and-1 which was converted to bring the score to a 15-15 tie.

In the proceeding plays the Tigers pulled away with a consecutive three and two to take a 20-15 score. The Tigers seemed to only be picking up momentum midway through the second quarter.

Sophomore point guard Sebastian Martinez demonstrated this by breaking ankles among the Mark Keppel defense to convert a layup. The following play, Martinez converted a fast break for another two points to the Tigers. The quarter ended with South Pasadena ahead 30-19, having scored 18 points to Mark Keppel’s 6.

The Tigers came out of halftime looking slightly slower than at the start of the game but got early points on the board with 3s by Williams and Ho. Williams racked up another 5 points with a two and-1s, one of which was completed. South Pasadena maintained their lead throughout second half play, and the third quarter ended with a score of 45-31 Tigers.

Junior point guard Taj Ringer carried the ball into the opposing half and passed on the run to sophomore guard Oni Balogun. Balogun passed back to Ringer through multiple defenders. Ringer bypassed his competition with a spin to complete the play with a layup. Finny Ho later recovered the ball on defense and then gave the ball to William who made a no-look pass to Jack Madison on a fast break.  Madison missed the first shot but the Tigers managed to recover and score the rebound.

Mark Keppel narrowed the lead to 8 at one point, but otherwise stayed 10 or more points behind for the rest of the 4th quarter. South Pasadena refused to give up the lead and the game ended with a score of 59-47 Tigers.

“Coming out of the locker room, we needed to win because we got San Marino on Wednesday. As a team we definitely picked up defensively,…but we need to stay disciplined because that cost us a lot.” Williams said.

Ho ended with 14 points and Sebastian Martinez ended with 8. Ringer and Madison scored 6 points each, and Oni ended with 4.

“I thought we played well. First half we did a good job, a really good job, but [in the] second half we could have played better. Overall we won which I’m happy about,” Head Coach Ernest Baskerville said.

Basketball will play their next game at San Marino on Monday, Jan. 18th, looking to knock off their league rivals at 7:00 P.M.4