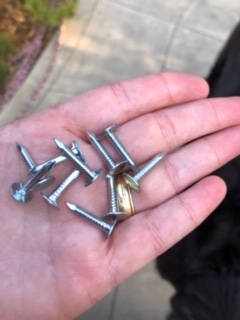 Six residents reported finding nails of the same size left on their driveways in the past week.

South Pasadena residents who had publicly shown support for the Black Lives Matter (BLM) movement through lawn signs recently found piles of nails left on the end of their driveways.

Amy Betts was the first community member to report the incident on a local Facebook group, which encouraged five other residents to share that nails of the same brand and size were also left on their driveways in the past week. None of the affected residents were able to spot the perpetrator.

The nail dumps follow the recent spread of flyers with the white supremacist slogan “It’s OK to be white.” The occurences prompted Betts to reevaluate her view of South Pasadena’s political landscape and level of inclusivity.

“I am just shocked,” Betts said. “I thought South Pasadena was a very liberal town, but I guess not. There is a clear pattern of racist behavior here. I want to believe that it was just someone from outside South Pasadena, but that doesn’t seem to be the case.”

This is an ongoing story. More information will be added as the situation unfolds.