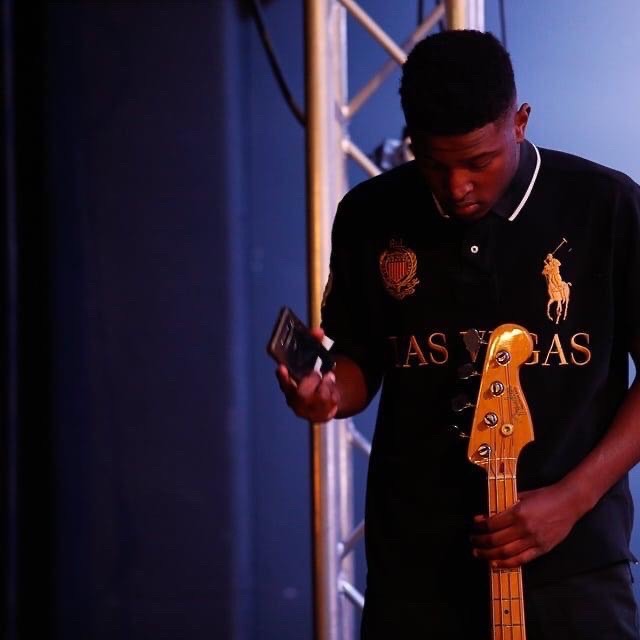 Growing up in a highly musical background, Matthew Dudley is taking his skills and passion into the next chapter of his life.

A graduated senior, Matthew Dudley has a bright future in front of him. A love for music that spanned across his whole life, Dudley always took the initiative to go above and beyond to fulfill his passions.

“I always wanted to be a musician,” Dudley said. “My mind was never changed for that. But the most life changing moment for me was when I realized that I could really do something with music.”

In his years at SPHS, Dudley and his bass guitar were constant fixtures at yearly Talent Shows. But that was not the only place one could see him in his element. Whether Dudley was seated in the semicircular fashion in orchestras or on the stage with fellow band members, there was no limit that could stop his musical prowess.

It is difficult to place him, a profoundly diverse artist, into a single category on a single spectrum, but there is no denying the thoughtful and emphatic manner in which he carries himself.

The strengths in his musicianship come from his family background. His mother, a conductor of two junior orchestras in Santa Barbara, introduced the violin to Dudley when he was three years old. Strong-willed and persistent, Dudley pushed himself into the instrument with a passion, practicing diligently everyday.

Honing his craft paid off. In his classical career, Dudley took part in numerous government dinners, performances at Disney Hall, and even the memorable 2019 Excellence in Sports Performance Yearly Award (ESPYS) on ESPN, where he was a backing violinist for Tori Kelly and met Kobe Bryant backstage.

“And so backstage while we were waiting, Kobe was right in front of us and he was just like, ‘Y’all nervous?’ I was kind of in the concert mode, so I was like ‘Nah, not really. I’m good’ and he said, ‘Good, don’t be,’” Dudley said.

This was a cataclysmic moment for Dudley. The stint at the ESPYS had been an unexpected occurrence; the offer had been extended his way after one of the Disney Hall performances. In a matter of a few, short days, Dudley acquired an entertainment work permit and underwent numerous rehearsals in preparation for the event.

The performance itself was a success, and the awe of meeting Kobe — his favorite basketball player — and other famed individuals left Dudley amazed at the sheer height of the stages his abilities could take him.

“At that moment I thought that if I really worked on my music, I could be more than a studio musician.”

Everything crystallized and Dudley’s effervescent dream of producing his own music professionally became more tangible. Because even while his classical activities had flourished, his interests in other genres of music had grown in tandem.

Both of his parents had accumulated extensive music libraries, harboring the rich, musical environment in which he grew up. Here, artists like Pink Floyd’s Roger Waters inspired him to take up the bass guitar when he was nine years old, an endeavor he took in stride by teaching himself. But it was in middle school that Dudley first brushed with his future dream.

“I had discovered rap and hip hop, and that became my favorite genre. But as much as I loved the wordplay, I really loved the beats and instrumentals of it. I related to that more,” he said. “I loved how everything sounded, and that is why in freshman year I started producing my own music.”

Dudley naturally pivoted toward like-minded peers. A few groups were in the picture in middle school and a band was active under the name Lesser Saints during high school, but it was not until this past December — after a lineup change with the lead singer — that the current iteration, This Bitter Thing, came into formation. They are a versatile group that performs in a variety of genres, much like their bass guitarist.

“Our whole image is that we try not to limit ourselves in the kind of music that we do and how we do it, because music is one of those things where if it sounds good, it sounds good,” Dudley said. “It doesn’t really matter the genre or the kind of sound. It’s that feeling that music evokes. If you can catch that, then you are doing your job as a musician.”

“I had a full day killed every Sunday of my high school years, but you know, it was fun,” he said.

“My goal later on is to be a music executive and I want to run my own label. I feel like I have that eye or that ear; I want to help people blossom, and it goes back to the kids. I love helping them understand and find out about music, because it’s a way of finding yourself. Little violins lessons are like life lessons.”

The future of the band is still up in question, as college would drive much of the members away to different parts of California or the U.S. Regardless, This Bitter Thing is hard at work on their first EP. The coronavirus situation is making things difficult, but each of the members are recording their parts separately and often conferring with each other through video calls.

Dudley himself will head to San Diego State University in the fall. Firmly entrenched in the music industry, he plans to major in Music Recording Technology and Audio Design. He is particularly interested in sound engineering, as it is vastly different from the producing he knows.

Dudley also plans to release his own song in the upcoming months on Soundcloud, although as a self-avowed perfectionist, this may take some time.

“I always want it to sound good. And I know, when I started, all my music sounded like cr*p,” he said. “But I continued to push myself for hours and hours and hours every night since freshman year to get better and actually make music. And I think I have gotten to that point where it’s just ‘eh.’”