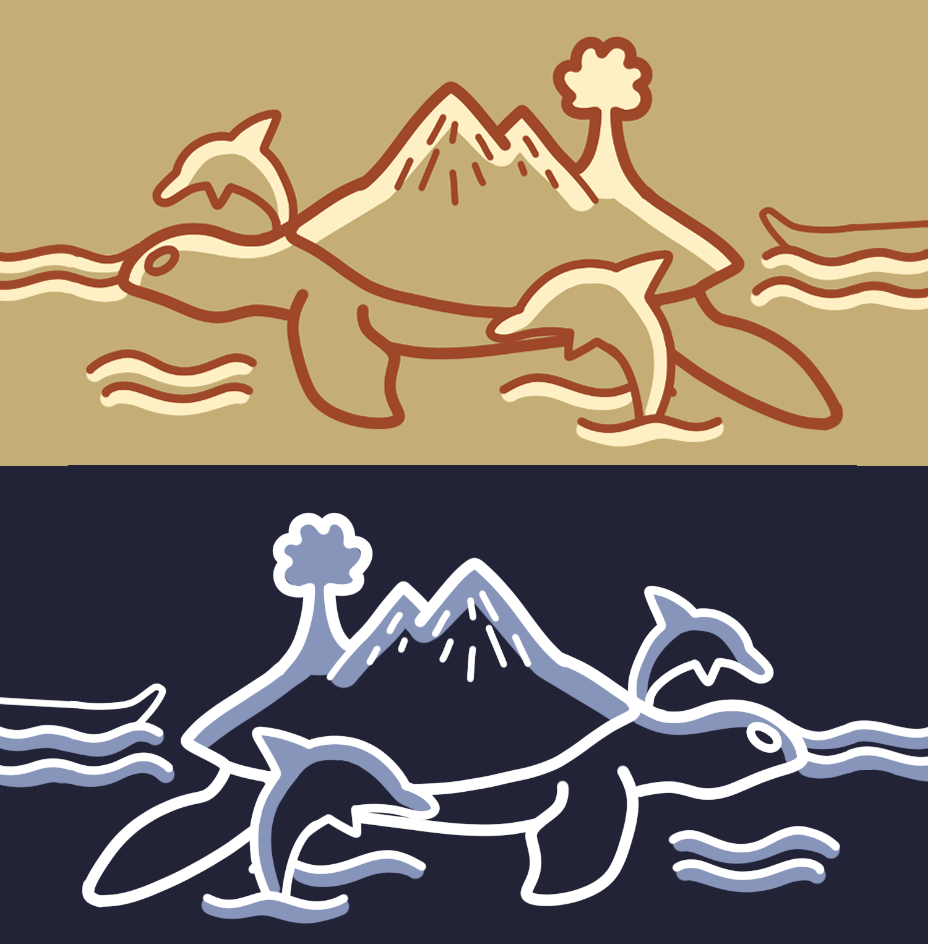 Gabrielino-Tongva people are of the Uto-Aztecan language group. They are not one isolated tribe, but a community of groups that uphold Tongva cultural heritage and traditions. The different groups identify with various names, such as Gabrielino-Tongva, Tongva, Gabrielino, or Kizh. The word “kizh” is derived from the often dome-shaped homes they lived in.

Chingichnish is the original religion of the Tongva people, named after the deity the religion surrounds. Both men and women could be shamans, and were viewed as the healers of their communities. Nature is heavily integrated in the Chingichnish religion; shamans were believed to shift between human and animal forms, and it was forbidden to kill porpoises and owls. There are no evil spirits or equivalents of hell and the devil, the concepts of which were first introduced during the assimilation of the California missions.

There are many Gabrieliño legends that describe how nature came to be. An example is the story of the Great Spirit lining up a turtle and its six brothers and building land on their backs. The turtles began to argue and swam in opposite directions, creating earthquakes.

They follow Mother Nature’s ten rules to live by, which detail a strict appreciation of the earth and its living things, as well as an unrelenting work ethic.

The Tongva nation is only state-recognized, and has the right to self-govern. To be federally recognized by the United States Department of Interior is to have an acknowledged government-to-government relation with the United States, which provides access to certain benefits from the Bureau of Indian Affairs. If the Tongva gained recognition, their people would be eligible to receive much-needed support from federal assistance programs, namely the Temporary Assistance for Needy Families, the Supplemental Security Income, and the Low Income Home Energy Assistance Program.

Information from the California State Legislature states that the Gabrielino-Tongva are among 50 well-documented tribes that are not federally recognized, and they are one of the two state-recognized tribes of the 50.

“Part [of the reason] is due to [the fact that] we don’t have fluent speakers of our language. Our language has not been in everyday use since the 1940s,” Quinn Balsz, a Tongva descendant, said. “We have linguists deciphering the language and they’re starting to have classes where you can go and learn.”

Possibly the most distressing result of the missions was that many Tongva were forced to leave their beloved culture and religions behind after being absorbed into the Mission San Gabriel Árcangel and Mission San Fernando Rey España. Even now, descendants of Native Americans are struggling to stay close to the heritage and culture that was taken from them.

Singer-songwriter and poet Kelly Caballero has used her art as a way to voice the numerous struggles of her Tongva identity, including the burden of seeing a land that once belonged to her ancestors being destroyed by an urban landscape.

“Just imagine L.A. without [the city part of] L.A. and how beautiful of a paradise this would be. That image is like what just gets me excited because that’s what I want, that’s what I crave as an Indigenous person is like peeling [the urban cityscape] off like a band-aid,” Caballero said. “Sadly I don’t [see L.A. returning to its original land]… I only see it getting even worse because of global crises, climate change, and political unrest. I don’t see the shift that we keep hoping and praying for happening. I see it spiraling.”

The dangerous effects of insufficient education
From common words to foods to childhood games, America has adopted Indigenous culture as their own without the proper recognition of where it originated from. Most Americans know nearly nothing about the Native Americans that came before the European colonization and even less about the marginalized reality they live in today.

“One of the biggest things [we] lost was our creation story [the Tongva’s oral narrative of the world’s beginning],” Balsz said. “The main one is recorded through the San Gabriel Mission from a [Catholic] father. So it was [recorded] the way he saw it and not the way that it was… he didn’t understand our way, our way of thinking, and our beliefs.”

This whitewashed version of history dictates the way their culture is taught in school. In the state’s K-12 social science standards, only six of 104 sections focus on Native American “Indians,” the word the Board of Education uses for Indigenous people; none are required at the high school level. This inadequate curriculum reduces rich Indigenous culture and a history of oppression to something secondary to the more extensive lessons about European colonizers, which contributes to a widespread ignorance that has allowed racist beliefs about Native Americans to persist.

“There is a huge stereotype that all Indians are drunks, and that is not the case. And some people think that we all own casinos or all [Native Americans] know what your dreams mean. I can’t tell you how many times people have come to me and went like, ‘I had this dream and I don’t know what it means.’ And I’ll be like, ‘I have no idea,’” Balsz said.

These stereotypes also remain prolific in the form of Halloween costumes, cartoons, and the mascots of sports teams like the Cleveland Indians and the Washington Redskins, whose inaccurate portrayals of Native Americans only further the influence of harmful misconceptions.

“I see [using redface and dressing up like Native Americans] as complete disrespect. We don’t wear costumes. That’s our regalia,” Balsz said. “We’re not mascots. If [people] really wanted to honor us, they would recognize us as human beings and people.”

Growing calls for reform have prompted efforts to make amends for the racism against Native Americans: Sports team names and mascots have been changed as recently as July 2020, and Congress has passed eight laws protecting Native American rights since 2019.

Raising awareness to save the Valleys
Members of the Tongva Band of Mission Indians of San Gabriel continue to keep the history of the Tongva Indians alive by passing on traditions to their children, educating communities about the Tongva nation’s existence and history, and dismantling the racist misconceptions and stereotypes surrounding their culture.

“[Students learn about the] Lakota because they’re a bigger tribe,” Balsz said. “But [schools] don’t focus on South Pasadena being on Tongva land. They need to kind of personalize [education about Native Americans] to each area instead of generalizing it to natives that aren’t even from that area.”

Caballero’s work as an artist and educator has helped raise awareness about the Tongva people; in the past, she has organized workshops and seminars, including one for SPMS English teacher Stephanie Jenkins’ class. Though Caballero believes learning about the people who originally lived in one’s own region is one of the most critical steps to supporting Indigenous people, there are many other ways non-native people can help.

“We have to come from all avenues to create a better world. So if that means somebody plants a California Native Garden or a campus or a business takes all the invasive plants out in front of California native plants, we’re healing the landscape and bringing back the animals and the critters that live here. That’s one small way that individuals, companies, and organizations can make a difference,” Caballero said.

Though the Tongva nation still faces a long uphill battle to recognition, many individuals of Tongva descent hope that their continued efforts will cause more people to truly acknowledge the presence of their people.

Peer Mediators expands its work to include wellness and social justice