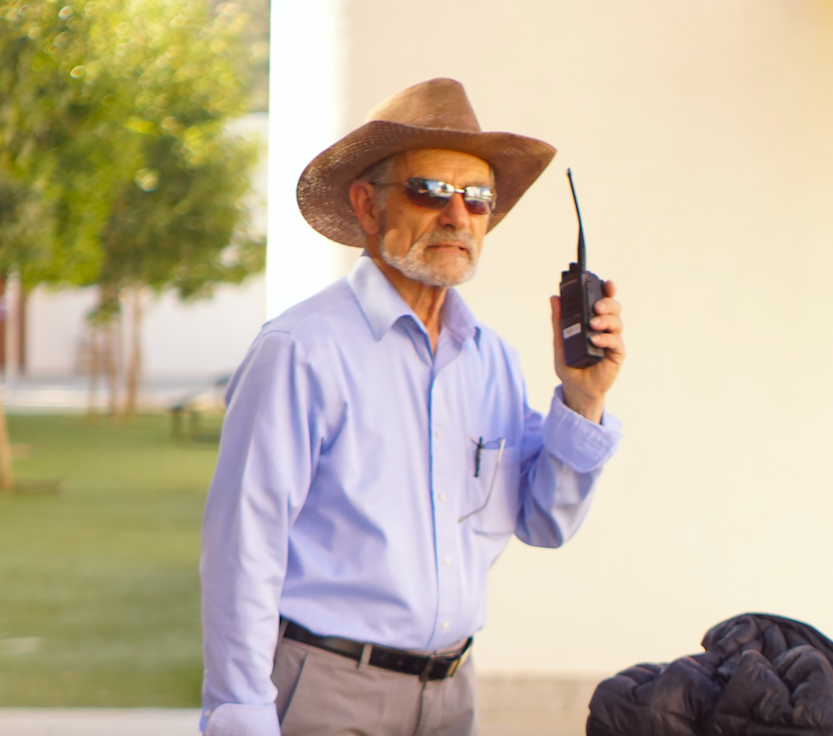 Never without an anecdote or a piece of advice, Mr. G has found his passion in working with students after years of traveling abroad.

Many people view Mr. G — Megerdich Baghram Gregor — as just a staff member on campus, unaware of the captivating stories hidden under his cowboy hat and sunglasses. Students, intimidated by his poker face and aloofness, often walk past Gregor. Little do they know about his adventures, the roads he has taken, and the intricacy of his past.

In the early 70s, Gregor moved from Iran to Germany to seek higher education. During these years, he took time to travel from France to Spain, Italy, Slovakia, and Austria. With a sense of exhilaration racing through his blood, he became culturally immersed and connected with the world around him.

“Learning the language, people, culture, food, scenery, and roads allows you to be more culturally aware and gain an understanding of people,” Gregor said. “This journey has allowed me to understand that this is their living style, learning about and respecting them.”

Now, taking on the role as campus supervisor at SPHS, Gregor recalls his journeys, sharing his experiences of exploration, open-mindedness, and conscientiousness.

America is Gergor’s third home country, and he is familiar with seven different languages, along with the cultures of his previous homes. This exposure has made it easy to embrace people from different backgrounds and accept them regardless of appearance. Gergor’s retained memories of these cultures have become pieces of a puzzle that contribute to his perspective of diversity.

Along with sharing cultural awareness with his adventurous tales, Gregor shares stories and lessons from his past, usually originating from the daring experiences from his childhood in Iran. To students acquainted with him, he often relates his time in high school to their experiences, reminding them that their actions have large consequences and can play a very large role in their lives.

“As I was 17 and in school, we were doing what guys usually do behind the school. My friends would sneak to the back of the school and smoke cigarettes. So one day, I tried it and I had a bad experience, vomiting. From that day, I said no thank you to cigarettes and hoped to tell students about the consequences.”

His other stories focus on his struggles in college and the message that Europe was not just a place of adventure, but also a place to pursue his goal of higher education. Gregor realized that education was an important stepping stone in life; finding his true passion in administrative science enabled him to develop life long skills including persistence.

As students approach him about his past, he makes sure to tell them about his experience with education as well as its benefits.

“In your life, you have to stay on the road, even if the road is winding up or down. That means don’t lose your target, if there are a lot of obstacles. In this school, put in time and effort to finish it. Education is the jumping board to other things in life, it opens the door to pursuing higher education or getting a job.”

Although he was unable to work in the field of his choice, he still has no regrets in becoming a campus supervisor. With his adventures around the world, Gregor is able to piece together adventure, culture, and education and share them with students, relieving them of both their curiosity of Gregor and of the world beyond South Pasadena.

Track and field shows out at Mustang Round-up