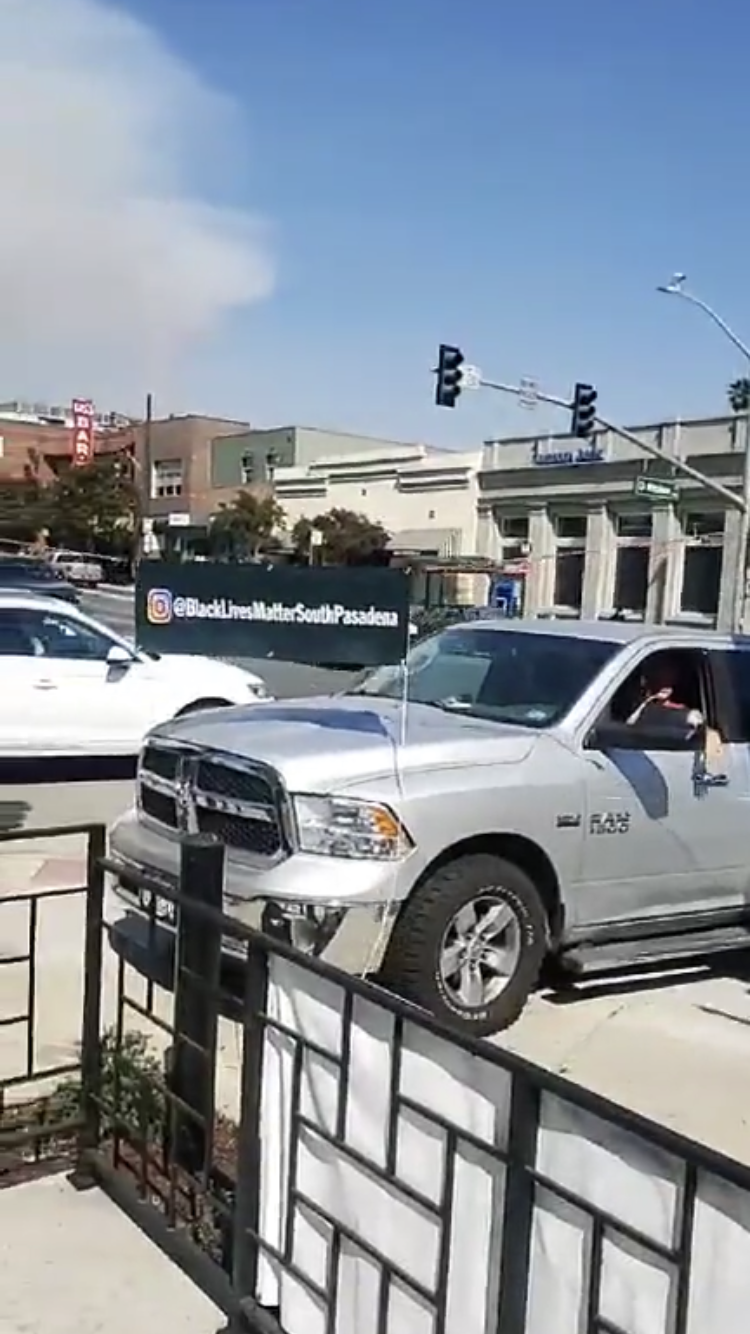 Members of Black Lives Matter South Pasadena hung a BLM sign above the driver’s vehicle before he drove away.

A white middle-aged man drove onto the sidewalk at the corner of Fair Oaks Avenue and Mission Street where Black Lives Matter (BLM) protestors were demonstrating shortly after 3:00 p.m. on Saturday, Oct. 3. SPPD arrived at the scene and talked to the man, who community members have unofficially identified as South Pasadena resident Richard Cheney, but no arrests or citations were given.

According to a video posted on Black Lives Matter South Pasadena’s Instagram, the man drove onto the sidewalk in front of Starbucks in what may have been an attempt to hit the BLM protestors with his vehicle. Witnesses also stated that the driver was on a phone call with Police Chief Joe Ortiz while he was on the sidewalk. When police arrived on the scene, he drove away down Mission Street but was quickly pulled over.

Witnesses caught SPPD officers on video talking with the driver, but they ultimately released him on the premise that they were not present to see the man driving onto the sidewalk.

“When we got here, when Officer [Michael] Smith saw [the driver,] although there is video, he’s on the curb. When Officer Smith saw him, he saw him on the sidewalk,” SPPD officer Catalina Valdez said in a video taken by a witness. “We didn’t visually see him drive up on the sidewalk… My partner’s gathered other statements so I’m going to write my report and we’re going to submit it to the district attorney’s office for complete action.”

However, SPPD’s press release states that the “motorist decided to illegally drive his truck onto the handicap ramp,” yet he was not cited. Witnesses claimed that the driver intended to harm the BLM protestors and therefore warranted an arrest.

“[A child witness] watched a white man in a truck drive up onto the sidewalk towards his father. He then watched the cops let the man who he thought may try to kill his father drive away [without consequence],” community member Anne Bagasao said. “What did the lack of concern or care by SPPD say to this child?”

Some community members say that this incident reflects a pattern of SPPD mistreatment and harassment.

“Residents have told me they have been approached by officers multiple times for almost little to no reason [because officers] felt they did something wrong,” local activist London Lang said. “We need a force we can all trust, that are here for us as a community and as a whole, who don’t use bias by the color of skin or gender, lead by a leader who cares about the people and background of OUR community, and a City Council that [is] strong enough to stand up for [its] distressed community members who have problems with police oversight. We as a community need to come together as one and work together to tell our officials we are fed up and want things different.”

SPPD circulated a press release saying that the department will present the case to the L.A. District Attorney’s Office.

How many times did you need to point out the driver was a “white man.” Trying to frame a political narrative or report “news?”