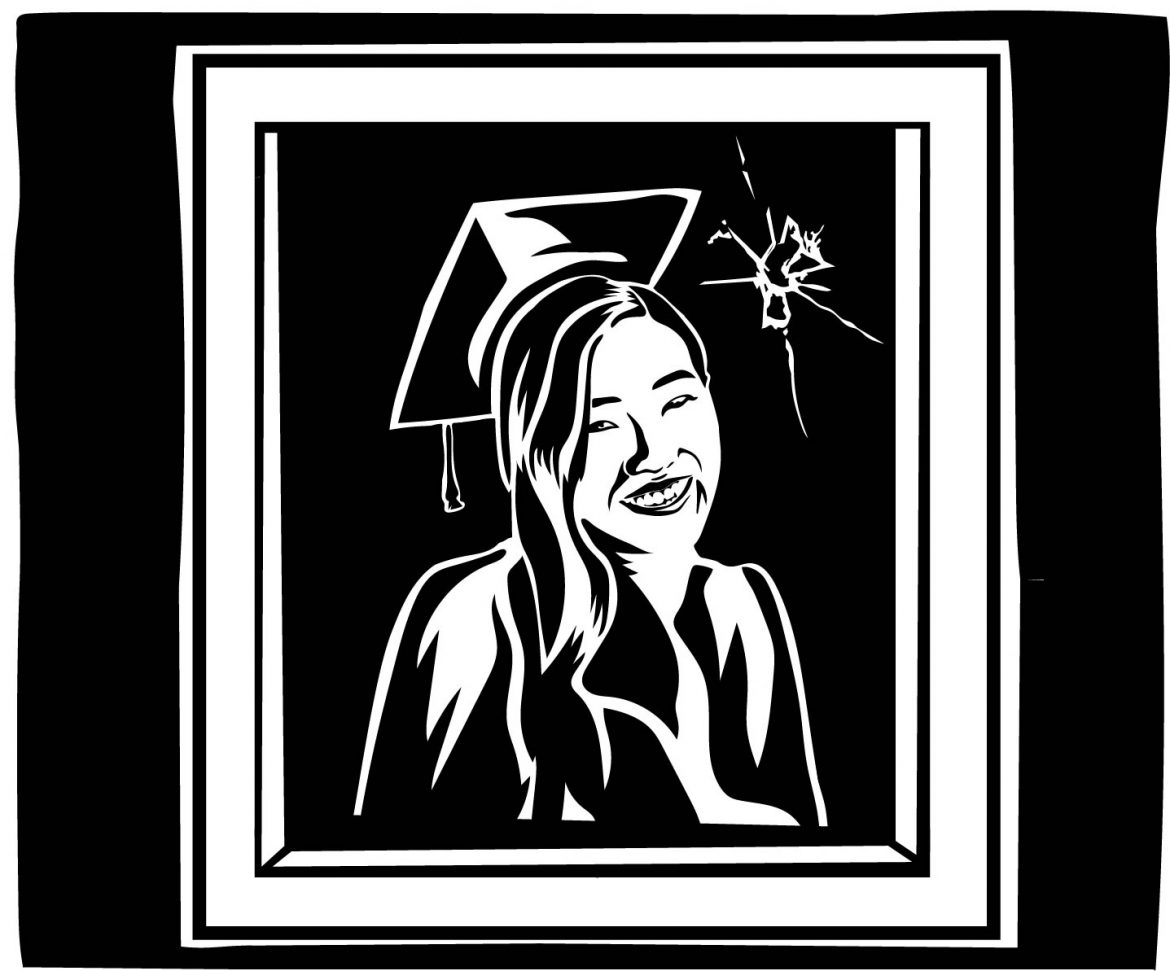 Shine Cho led Tiger Newspaper to win the Columbia Scholastic Silver Crown award, one of the most prestigious accolades for a student publication. Two years later, her future is less certain after President Trump's removal of DACA.

As it is for many of you, South Pasadena is my home. In my sixteen years of living here, I’ve had the opportunity to read, write, and direct some of the stories featured in this newspaper. I had the pleasure of serving as the Editor-in-Chief of Tiger from 2014-15 and for two other years covered news in the city and on campus. Yet, I’ve never once shared my own story publicly.

I am undocumented. DACA, the Deferred Action for Childhood Arrivals, transformed my life for the past five years.

At two years old my parents brought me to this country from South Korea. My father, after visiting South Pas sometime in the early 90s, was inspired by the stadium lights shining onto Roosevelt Field in the middle of the night. At the time, South Korea was not the home of Samsung and K-Pop as it is today. We lived in a rural area with barely enough electricity to get through the evenings due to a devastating recession.

In a move I will never be able to repay, my parents brought our family of five to California. My older brother David, my sister Lena, and me. Their reasoning for uprooting their entire lives was to give my siblings and me better opportunities — a sacrifice I still don’t understand, but one familiar and central to the immigrant narrative.

I couldn’t speak a word of English on my first day of kindergarten at Arroyo Vista Elementary School. My cheeks burned bright-red as I sat through a placement test, staring blankly at jumbo crayons whose colors I was supposed to name out loud. A counselor pointed to a blue crayon, “pah-lan saek” I replied. “Blue” in Korean; a fail in English.

But eventually, I slowly grew into South Pas. I roamed Thursday Farmer’s Markets on Meridian Avenue. I ate too many Hi-Life fries and I went to countless Fun Fairs. Every one of my teachers was determined to help me succeed, and over time, I started to believe that I, too, could do anything I wanted when I grew up.

Then at ten years old, as a fifth grader, I received a letter in the mail that told me I was wrong.

I was translating credit card statements for my mother when I came across a letter from the Department of Homeland Security. After years of filing for status and two appeals, this letter plainly stated in 12-point Times New Roman font that our final visa application was denied. My family was being deported.

How I ended up in this situation is a long story, but here’s what you need to know: My parents are not criminals. At two years old, I did not decide to fly across the Pacific Ocean to take your job. These are the narratives you’re used to hearing about undocumented immigrants, but they do a poor job of explaining an unjust system that leaves families in these difficult circumstances. My parents brought our family here legally but once standing in “line” for papers, were denied after nearly ten years of raising their children here.

At that point, we couldn’t just return to a distant country I barely knew. I went from not knowing any English, to performing at talent shows in elementary school, serving within class leadership positions at both middle and high schools, and eventually leading the 101st Tiger staff that went on to win a national award for the first time in 20 years. Growing up here, I felt American in every sense except on paper. In fact, I am American in every sense except on paper.

My parents’ decision to overstay had consequences. For years, I wasn’t sure what I would be able to do without legal status. Would I be deported? Able to go to college? Get a job? DACA, President Obama’s executive order, was the best form of relief to all these questions. The program granted me a social security number, which allowed me to legally work, and get a driver’s license. For those years I benefited from DACA as a high school student, I put full effort into every opportunity I had in this city. I babysat and tutored after school all four years in high school, led organizations on and off campus, and graduated with a 3.9 GPA and a full scholarship to UC San Diego.

DACA gave me a temporary fix to a problem that could not be resolved by “getting in line and submitting some papers.” The program itself was an imperfect solution to congressional inaction on immigration reform. And thanks to DACA’s termination, 800,000 others and I are asking: Now what?

I want to share this part of my life with the community that’s given me so much. The undocumented condition is as invisible and as silent as people want it to be.

Growing up, I didn’t know how to talk about my status. However difficult it still is now, I want to share this part of my life with the community that’s given me so much. The undocumented condition is as invisible and as silent as people want it to be. I went for years not talking about this— yet it constrains me in such concrete and daunting ways.

Under DACA, I was able to look towards life after graduating college without fear of deportation, of entrapment. And beyond fear, it allowed me to hope. Hope for the causes I wanted to work toward and all the ways I wanted to give back to this country. But without the tangible means that DACA provided me to achieve those things – a way to work legally and contribute to this society – I’m not sure how I’ll be able to.

President Donald Trump’s decision is senseless and hurtful and it’s certainly one that will disrupt my life plans. But I’m determined to hold onto my dreams of attending law school to defend the most vulnerable among us.

I am sympathetic and supportive of your efforts to remain in the United States. Nonetheless, I would ask why “[a]t that point, [your family] couldn’t just return to a distant country I barely knew.” No one ever promised that your family would be able to stay in the United States. Your parents knew that they were guests, not permanent residents or citizens, and that the United States has laws and procedures to which they were subject. However unwise the decision not to grant them permanent residency, when they made the choice to overstay their visa, your parents made a criminal choice that put not only their lives but yours as well in difficult straits. Does a sovereign country not have a right to regulate by law who comes to live within its borders?

Awesome article Shine, thank you so much for sharing your story. May God continue to bless you in everything you do in your life. I’m also praying for everyone effected by the recent DACA issue. I encourage everyone to contact their elected congress person to put pressure on the current officials in charge bent on destroying this very important issue.

Inspiring story. There must be reasoing behind Trump’s decision however, which nobody has mentioned. Does anybody know what the reasoning is? The comments seem very one sided.

Your history is inspiring! You should be considered nothing less than complete success story in the eyes of every American! I hope Congress can legalize your status and find a path to citizenship for you and countless others like you. I would see it as the continuation of our tradition of welcoming those seeking and striving for a better life into our country.

You beautiful soul! Many of us are openly opposed to the termination of the DCA and I was brought to tears not only by your story , but by your DREAMS to contribute to the cause that will help other young people that share your fears and hopes for your futures. I only hope and pray our government will not shirk their responsiblities, but protect our “Dreamers”!

You are an inspiration and we are so lucky to have you. There are thousands of us that are doing what we can to ensure that you, and the rest of DACA, recipients don’t get deported. I’m going to share your story and I hope that you continue to speak up. Best of luck and keep moving forward.

Shine, you are radiant! Thank you for sharing your story.

I’m very proud of the fine person you have become. I will share your story and enlighten as many as I can. We can not let this sadly enept president continue to make this and many other horrible mistakes. You are a valued American to me. More power too you and your family.

Shine, I have always been so proud of you and as I type this through tears I am filled with admiration and determination to share your words and use whatever privilege I have to fight as hard as I can for what is right.