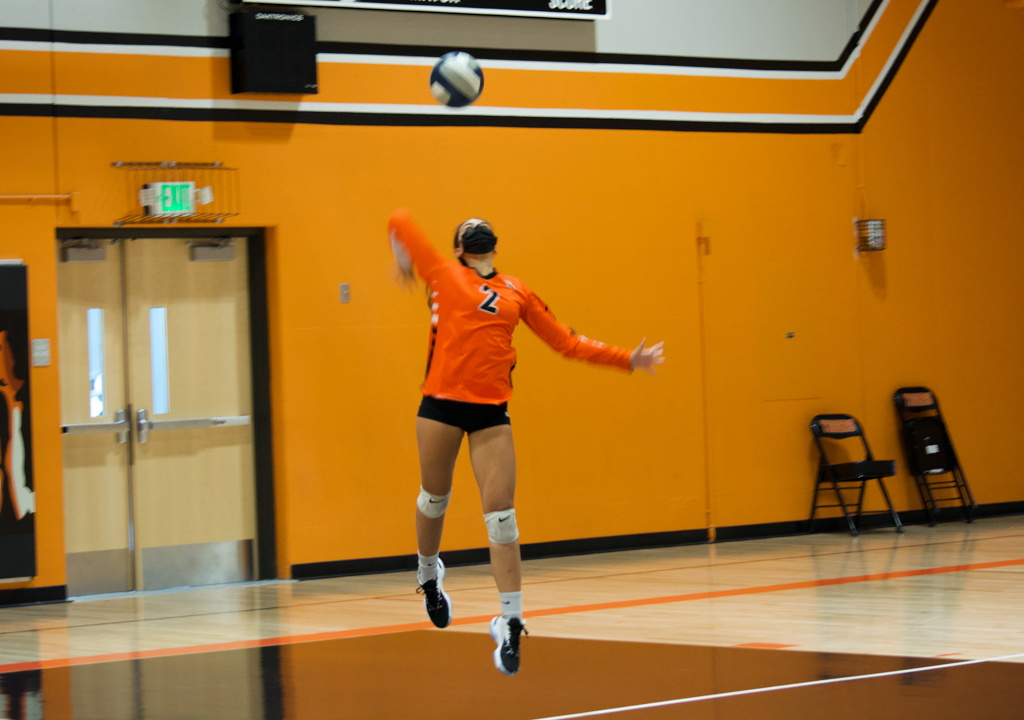 Girls volleyball defeated Mayfield Senior in three sets during their non-league game on Monday, Sept. 20. The girls presented a strong front, dominating the first and second set of the game, and faced some challenges in the final set yet ultimately walked away victorious.

Mayfield won the starting point, however, whatever feelings of victory that sparked for the guest team were quickly diminished. Sophomore outside hitter Jenna Garner offered Mayfield the first of what would be many dominating kills to come, tying the score 1-1.

Throughout the first set, South Pas’s offense was unwavering. That combined with the lacking defense of their opponents paved the way for a simple victory. Unpredictable tips like the one from senior opposite Kennedy Taylor and attacks supplied by senior outside Abby Garner repeatedly got the best of Mayfield.

Mayfield offered an array of powerful spikes of their own, but that only put South Pas’s defensive skills on display. A solid block by sophomore opposite Ingrid Zahn and senior opposite Evelyn Dowd brought the score to 12-9 in the first set.

Even then, it was rare that the guest team’s attacks impacted the scoreboard. If Mayfield was earning points, it was more often than not due to some mistakes made by South Pas.

Mayfield refrained from putting up a threatening fight until the very end of the first set. From there, the power of their spikes increased noticeably and they managed to clean up their defense, actually receiving some of the balls sent over by South Pas. that helped to decrease the score gap. Taken aback by the sudden shift in competition, player miscommunication led to South Pas losing some points, bringing the score to 23-22.

However, Mayfield’s rapid energy increase wasn’t enough and the first set was awarded to South Pas, closed with a dominant spike by Taylor.

Mayfield’s newly discovered competitive streak carried into the second set, increasing as they now had something to prove. Spikes that South Pas had trouble responding to and blocks contrasting the ones they offered just thirty minutes ago set Mayfield up for an early lead. A tip by Zahn gave South Pas a single point, but it was the only one the team could attain.

When the score hit 6-1 in Mayfield’s favor, South Pas was cornered into a timeout, and it proved successful for South Pas as they returned with tenacity. Senior libero Alyssa Sokolow provided an array of flat and speedy serves which diminished the gap in score.

After being down for the majority of the second set, the Tigers crept up to their competition until the score was tied 9-9. Noticing this shift in confidence, the guests scrambled to take back their lead. While they managed to gain a few points, in the end, the Tigers closed out the second set with yet another victory courtesy of a powerful hit from Taylor, 25-22.

In the previous sets, one team managed to dominate while the other fell behind, but in the third and final set, both teams offered an aggressive performance in their attempts to win.

Consistent, flat, and direct serves by Jenna set the tone for intense rallies to come. During these rallies, South Pas further proved their dynamic skill set as players hustled.

After trading the score for the majority of the set so far, a powerful attack by sophomore outside Helena Foord tied them 6-6. From there, South Pas’s offense grew while Mayfield returned to their initial state of defense and South Pas pulled away.

Mayfield attempted to put up a fight, which at times looked like ongoing and entertaining rallies but at other times looked like faulty blocks against South Pas’s mighty, ever-prevailing attacks. The Tigers won the third set with another spike by Taylor, closing with a score of 25-17.

“I think we played really well as a team!” Sokolow said. “[Tomorrow] we can keep our serves in a little bit more and communicate better.”

The Tigers hope to triumph against the Immaculate Heart Pandas in a tournament on Friday, Sept. 24.