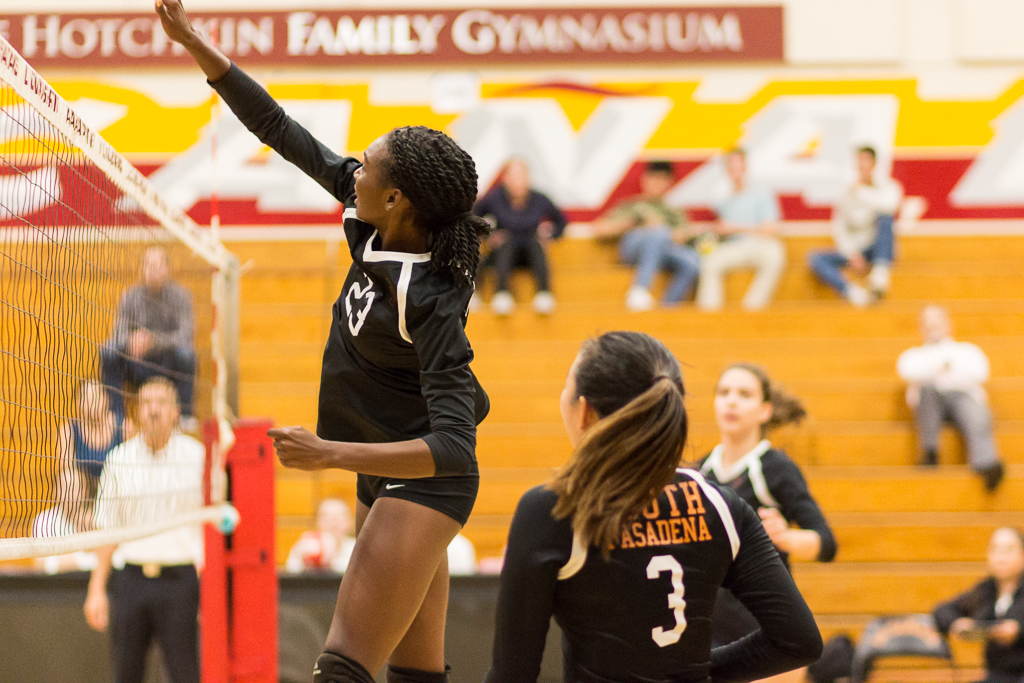 Junior Christina Taylor extends to slam the ball over the net.

Miscommunication by Tiger players in the first set allowed the Spartans to take an early lead, which gave them momentum for the rest of the set. La Cañada built on its lead with a 10-0 run, putting the Tigers down 14-3. Freshman Lola Foord attempted to lead a late Tiger comeback, collecting two kills. The Spartan lead was insurmountable, however, and South Pas was ultimately defeated 25-9.

Senior Lily Turner-Kipke centers herself under the ball while preparing to set.

The team regained its focus in the second set by limiting mental mistakes. Junior Christina Taylor set the tone for the Tigers with three early kills. A diving save by senior Sophia Benzoni also contributed to the Tigers rejuvenated style of play. Tiger miscues and tough calls slowly diminished their lead, however. A valiant effort from other role players allowed South Pas to sneak back to within one point, but a late Spartan push effectively ended the Tiger comeback.

Numerous spikes and a fast style of play highlighted the Spartans victory in the third set. Once again, Foord established her presence at the net, compiling another four spikes. Senior Madison Saito also helped to keep South Pas in the game with two spikes of her own. The score remained close throughout the set until another La Cañada run allowed the Spartans to pull away for good. The 25-16 loss in the third set gave La Cañada their first win in league play.

The Spartan attack proved to be too much for South Pas to handle, using their superior height to outperform the young Tigers. A plethora of mental errors on the Tigers also gave La Cañada an advantage.

The Tigers will have an opportunity to redeem themselves and even their league record when they face Blair at home on Tuesday, September 26th.