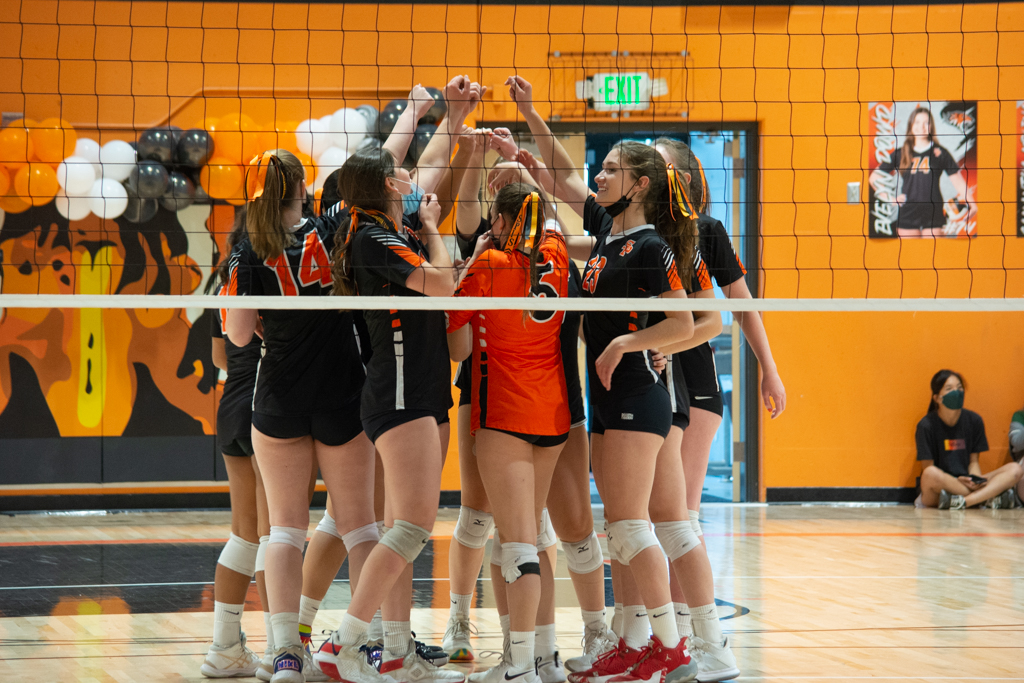 Despite falling in the fifth set to the Spartans, the Tigers secured a CIF spot.

Girls volleyball played their final league game of the year against the La Cañada Spartans on Wednesday, Oct. 13. In this rematch game, South Pas hoped to claim victory, but after another five nail-biting sets, La Cañada took the win in South Pas’ senior night game.

Before the game, the five seniors — Evelyn Dowd, Ally Sokolow, Abby Garner, Kennedy Taylor, and Samantha Molina — were honored with leis and other gifts to commemorate their final season at SPHS. They walked onto the court through a tunnel of cheerleaders and JV/frosh volleyball players accompanied by their families and cheered on by a roaring Tiger crowd. Each player was introduced with unique facts about themselves including their majors in college, favorite hobbies, and favorite foods. 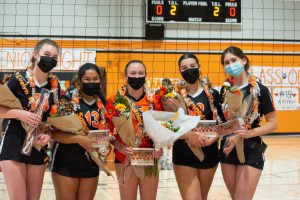 After the walk-on, the game began with a rough start for the Tigers in their first set, dropping passes and struggling to keep the ball in the court. Although, powerful hits by outside hitter A. Garner and Taylor revived the Tigers and tied the score 3-3. The Tigers rode on their momentum to build a sizable lead with the help of Molina’s serves and A. Garner’s strong angle shots. However, their lead was short lived as the girls started to drop passes and continued to hit the net. Ultimately, La Cañada won the first set 25-19.

At the start of the second set, the Tigers again struggled to complete strong passes, but Sokolow quickly regathered the teams momentum and defense. As South Pas managed to keep their serves in the court, La Cañada started to hit into the net, and the Tigers surged past 8-4.

Both teams struggled to gain the upper hand and the game continued back and forth. However, the girls staged a massive comeback as sophomore outside hitter Helena Foord, A. Garner, and Taylor smashed the ball down, catching the Spartan defense off guard. Paired with sturdy blocks by Dowd, the Tigers were back in the game after a 25-19 win in the second set.

The girls’ energy and momentum carried over into the third set, with great hits and serves by sophomore outside hitter Jenna Garner. The Tigers earned a lead they kept throughout the set, with minor setbacks along the way.

The fourth set was a complete turnaround for the Tigers. Coming into the fourth set South Pas was confident they’d continue their winning streak but failed to get any of their passes up. The Spartans managed to build a seven point lead which South Pas would not recover from. Despite A. Garner’s forceful hits and sophomore setter Kendall Taylor’s saves, the Tigers still could not take back the lead and fell 25-13 in the fourth set.

Tied 2-2, the fifth set was the tiebreaker but it started off poorly for the Tigers, with Kendall Taylor serving into the net and A. Garner tipping into the net. Hoping to stir up a lead, sophomore opposite hitter Ingrid Zahn hit a ball that bounced off a Spartan block and scored the Tigers their first point of the set.

Following two great serves by J. Garner, the teams tied 3-3 apiece. In spite of their promising comeback, the Tigers continued to hit into the net and missed their passes giving the Spartans a 15-7 and ultimately a victory for the night.

“I’m so proud of how we’ve played, no matter the outcome, and I’m so proud of the girls on my team,” Sokolow said. “I couldn’t have asked for better teammates.”

After their game, the girls held a traditional ceremony celebrating the seniors and reflecting on the 2021-2022 season.

South Pas finished the season placing second in the Rio Hondo League, with a 6-2 league record and a 33-7 overall record, securing them a CIF spot. The team will have their first CIF game on Thursday, Oct. 21, and their opponent is still to be decided.