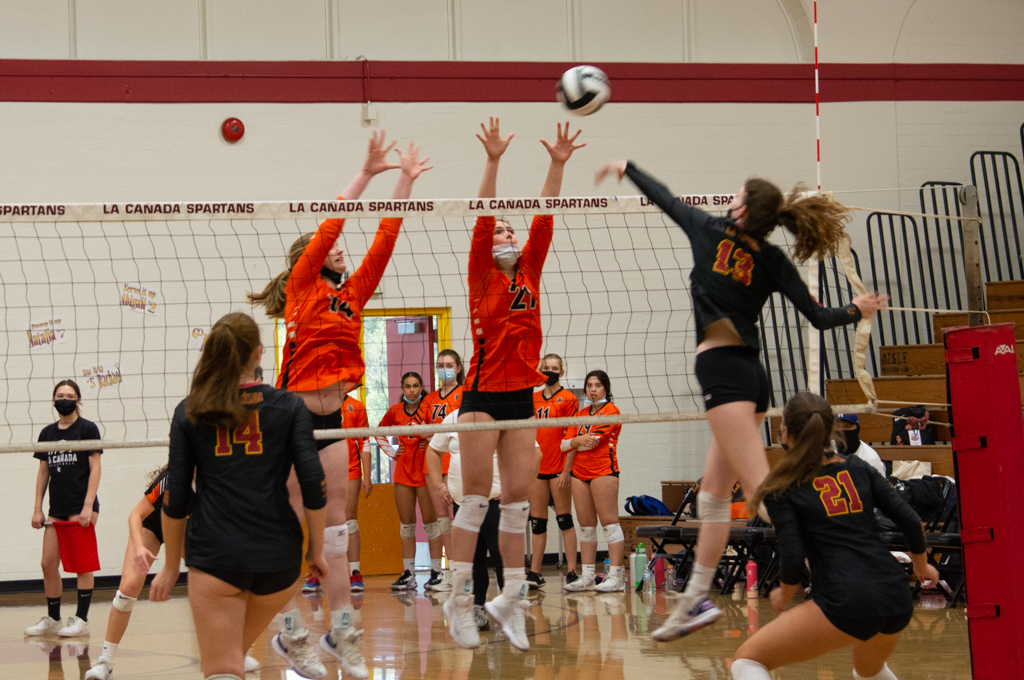 Girls volleyball fell in the fifth set to the La Cañada Spartans on Tuesday, Sept 28. The game was evenly matched, as the teams were tied 2-2- at the end of the fourth set and the tiebreaking fifth set presented a close finish, but South Pas lost 3-2.

Despite being in rival territory, the Tigers’ energy was unwavering. The La Cañada crowd was ruthless, but South Pas supporters gave them a run for their money and if it weren’t for the yellow and red decorations, it would’ve been difficult to distinguish who had the home-court advantage.

The lead traded off with each play at the start of the opening set as the energy from the crowd translated directly into their respective teams.

The Tigers boasted a strong offense led by sophomore outside Helena Foord whose merciless attacks left the Spartans dumbfounded and with her help, the Tigers pulled away enough for the Spartans to lose some confidence.

From there, it was clear the Tigers had gotten under their rivals’ skin as the Spartans struggled to retake the lead. Their serves landed out of bounds and their spike attempts landed straight into the Tiger’s fierce defense, allowing the gap to grow to 17-13.

After calling a timeout, South Pas’s confidence was magnified as they returned with even more tenacity. Senior opposite Kennedy Taylor made good use of the timeout, returning to showcase an array of her own kills that rendered La Cañada defenseless.

With commanding offense from Foord and Taylor, the Tigers pushed a tired La Cañada to their limits. The first set closed with a score of 25-20 in the Tigers favor.

South Pas picked up where they left off heading into the second set; their confidence perfectly backed by their obvious talent. The same could not be said about the Spartans. Initially, they struggled to keep up as the lead slipped farther out of their grasp, but a boost of power led La Cañada to display some powerful serves that South Pas was unable to receive until the score evened out 5-5.

Gaining possession of the lead had an impact on La Cañada, and the competition was revived to expose the true rivalry between the teams. After a powerful block executed by senior middle-back Evelyn Dowd and sophomore opposite Ingrid Zahn, South Pas brought the score to 8-7 before it continued to trade off towards the end of the set.

In possession of a slim but crucial lead, the Tigers called a timeout as the scoreboard read 23-21.  The most thrilling part of the game began when they returned. Long rallies took shape, and senior outside Abby Garner landed a merciless kill tying the score. In the next possession, she offered a strong block with junior opposite Ava Dorny to regain a slight lead 25-24. 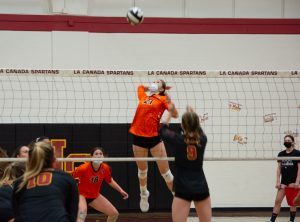 The lead continued to trade off between the two teams, but ultimately La Cañada’s offense won them the second set, finishing with a score of 30-28.

Both Garner and Zahn paved the way for the Tiger’s killer offense in the third set, boastering attacks that the Spartans couldn’t receive. South Pas put up a mighty fight, but their few mistakes were costly. La Cañada barely slid past them, closing the third set with a score of 26-24.

The Tigers didn’t back down in the fourth set. Tips like the ones by sophomore outside hitter Jenna Garner and Dorny consistently took the Spartans by surprise. But La Cañada also put up a fight and both were tied for a majority of the set. Late in the fourth, the Tigers’ hustle increased and in the final few minutes, they proved victorious with a score of 25-21.

Tied 2-2 in the sets, the fifth set was vital and La Cañada made sure to take an early lead. South Pas secured their first point through an attack by Foord and after Jenna Garner’s ace. Long rallies got the best of South Pas and La Cañada was able to take the advantage until the finishing buzzer, winning the fifth set 15-10.

“It was a hard loss,” Dorny said. “But we played really well as a team and it was one of the best games we’ve ever played, so I’m happy with it. [We can work on] finishing out, we had two sets where we were at game point and they took it, so we’ll work on that at practice.”

Now 3-1 in the Rio Hondo League, the Tigers will face the Temple City Rams in their next game on Tuesday, Oct. 5.