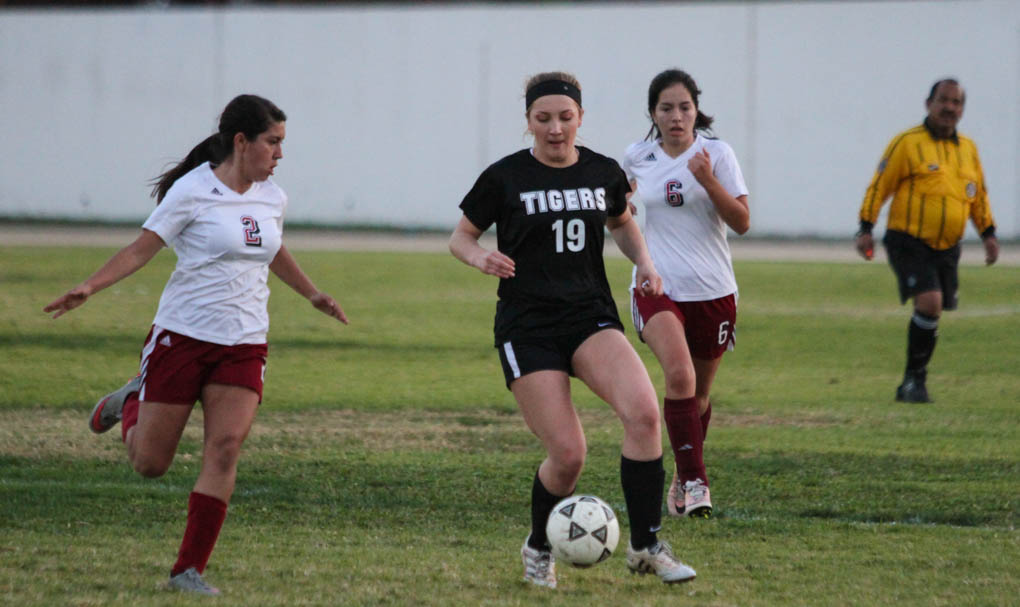 The varsity girls’ soccer team took its first defeat 2-1 against the Mark Keppel Aztecs at an away game on Thursday, December 8. In a painfully close match, the Tigers gave a strong performance, dominating a majority of the game, but were ultimately outmaneuvered by the Aztecs in their few minutes of weakness. This loss places their overall season record at 2-1-1.

The match started on a strong foot for the Tigers. As the first whistle blared, the ball was immediately brought up into Aztec territory by a determined South Pas offense. Junior forward Cate Latting swiftly attempted two shots on goal, each one narrowly missing its mark. Her early endeavors revealed what would be the Tigers’ hamartia in their match: the ability to calibrate a textbook kick, but the failure to follow through.

“In the end, we need to learn to finish,” Latting said. “An old coach used to tell me this Spanish saying: ‘play con ganas.’ It basically means that we must play with desire– with a hunger to win. I think we still have to learn to compete with that hunger.”

Throughout the majority of the first half, the Tigers put pressure on Mark Keppel defense while keeping Aztec offense far from Tiger territory. Freshman powerhouse Corey Segal persistently bypassed Aztec defenders, setting up multiple excellent crosses that went unanswered by South Pas forwards. But unluckily, none of the Tiger offense could secure a goal. Near the end of the half, the Aztecs were able to dig into South Pas territory. In a moment of confusion, the Tigers were not able to clear their goal box, and Mark Keppel was able to tap a stray ball into the net. Soon after, the Aztecs continued to put strain on Tiger defense. An expert corner kick allowed Aztec offense to set up a precise shot into the goal. Although punched out by junior goalkeeper Sophie Reynolds, the opposition pursued the blocked kick and attained their second goal.

Going into the second half, the girls were determined to recover from their difficult opening presentation. For the most part, the Aztecs were not able breach an unfaltering Tiger defense. However, even with different players, their prior troubles haunted the Tigers. On numerous occasions, sophomore defender Alyssa Bonk skillfully dribbled the ball deep into Aztec terrain. But again, each attempted shot by Tiger strikers could not find its way into the net. This was sorely evident when two consecutive corner kicks were fired in vain, as the ball was quickly blocked and cleared out of the Aztec goal box.

Suddenly, with five minutes left in the match, the tides changed for South Pas. Following a break after an in-game injury, senior forward Jayda Weeks rapidly scored a goal with a clean assist from junior defender Riley Segal. Rejuvenated from the small victory and eager to equalize the score, the Tigers fell into their stride. A relentless Tiger offense desperately kicked and pushed its way through a weary Aztec defense as the remaining minutes ticked by. The match came to a nail-biting finish as senior defender Amelia De Young directed a promising shot that fell directly into the hands of the Aztec goalkeeper.

“It’s always tough to lose a game, even in preseason. But there are some good lessons there: a lesson in resiliency and a lesson in character,” head coach Victoria Lathrop said. “Finishing continues to be our biggest challenge. We’ve been talking about a sense of urgency versus a sense of panic. A sense of urgency means we play quickly and efficiently while a sense of panic means we fall apart and lose our game plan. The girls still need to work on that. But, I’m proud of the way they played today– I’m glad they got on the board and didn’t give them a shutout win.”

The girls intend to bounce back from today’s defeat at their next game against Sierra Vista High School at home on Tuesday, December 13.