Top Posts
Teachers voice concern over adopted learning models
Community may get a chance to vote on...
SPUSD outlines plans for distance learning during the...
Anti-Zionism cannot be equated with anti-Semitism
Anything goes?
L.A. complies with statewide protections and improvements for...
LARPing: an activity to experience the game beyond...
Residents voice encounters with the SPPD at virtual...
Why affirmative action is necessary
CIF announces athletic calendar for 2020-2021 school year
Home Feature Fantastic Beasts: the Beginning of a New Franchise
FeatureFeaturedWeb Exclusive 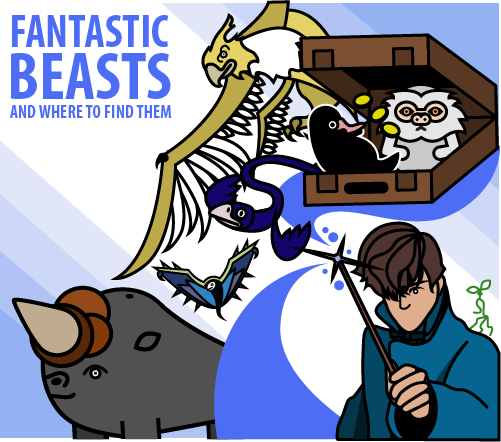 Fantastic Beasts and Where to Find Them, directed by long time Harry Potter filmmaker, David Yates, is a superb film, and certainly a must see for fans of the Harry Potter franchise. Through a combination of witty and intelligent writing and masterfully executed special effects and camerawork, Fantastic Beasts sits as an example of a film that allows easy entry into the deeper wizarding world.

Fantastic Beasts is set in 1926 in New York, after the escape of  the dark wizard Gellert Grindelwald. It follows British wizard Newt Scamander (Eddie Redmayne), who arrives in America to release a Thunderbird, one of his beasts, back to the wilds of Arizona. Shortly after his arrival, however, a series of mishaps at a bank followed by the release of Newt’s suitcase full of magical creatures, forces Mr. Scamander to embark on a quest to retrieve the loose beasts. Accompanying Newt is the muggle (“No-Maj” in America) Jacob Kowalski (Dan Fogler), and the witches Tina and Queeny Goldstein (Katherine Waterston and Alison Sudol respectively). During their search for Newt’s beasts, it is revealed that a more dangerous monster has begun to wreak havoc in New York and threatens to reveal all of wizarding kind.

Fantastic Beasts is an overall excellently constructed film. It follows the pattern of excellence that director David Yates established with the final two Harry Potter films. All of the actors give wonderful performances, but most notable are those of Eddie Redmayne, Dan Fogler, and Colin Farrell. Redmayne portrays Newt perfectly as a socially withdrawn, but likeable wizard; Fogler’s Jacob Kowalski is a charming and humorous, but humble fish out of water now exposed to a world he would’ve never known existed. Ferrel’s Percival Graves is both intimidating and manipulative, managing to leave the audience to wonder what his real intentions are until the very end. Additionally, Fantastic Beasts executes its darker moments perfectly,

Fantastic Beasts inherits the excellent special effects and soundtrack of its Harry Potter successors. Furthermore, the camera work, which is used in terrific combination with the stellar CG animation, instills the audience wonder and toys with its viewers sense of size and scale: a suitcase can contain an entire zoo, a beast can change its size to its container like water, and a being of pure evil energy can expand and level entire city streets.

Where Fantastic Beasts falls short is in its tone. As the movie goes on, scenes oftentimes flip-flop between the rather light and comical quest for Newt’s released beasts and a darker story about domestic abuse and psychological trauma resulting in the birth of an evil magical monster. The latter of these two atmospheres is central to the plot, however, it is so poorly intercut with the main story thread that it seems more invasive than complementary. This tonal inconsistency is easily noticed during viewing, and becomes quite pronounced at the end of the movie. This is a serious problem, and drags Fantastic Beast down from excellence.

With all this said, Fantastic Beasts and Where to Find Them is a worthwhile watch, with its flaws being more a result of editing rather than failings due to acting or writing. Perhaps this film’s most lasting contribution to the Harry Potter cannon is the fact that its success has enabled the production of 5 more movies which will continue Newt Scamander’s story as well as help to further develop the complex and interesting universe created by author JK Rowling.