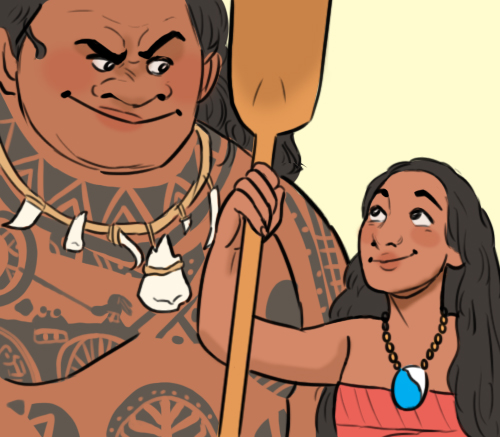 In the past decade, Disney has sought to upend their original ‘princess needs a prince’ stereotype established in the studio’s’ earliest works with newer, more self-reliant princesses. However, films like Brave and Frozen never went far enough to reach a truly independent heroine and further included complaints of cultural appropriation. The new release of Moana proves Disney has finally gotten it right, with no love interest in sight for its heroine and providing an empowering story based upon Polynesian mythology.

The film is centered around its title character Moana (voiced by Auli’i Cravalho), the adventurous daughter of a chieftain on the Polynesian island Montonui. Despite her obligations as her father’s successor, Moana is drawn to the ocean’s uncertainty and longs for a life outside of her own lineage and community. She finally takes the chance to defy her father when a dark curse provoked by demigod Maui (voiced by Dwayne Johnson) creates an ecological crisis on Montonui. The remainder of the movie follows Moana’s action-packed sea voyage to restore the heart of island goddess Te Fiti with the help of Maui and the film’s comedic relief, Heihei the sidekick chicken.

Stunning 3D animations are varied with two-dimensionals in the film to highlight the events of Moana’s journey with a diverse cast of characters. However, it is 16-year-old Cravalho’s debut performance as Moana that truly brings the film to life. Her youthful talent for voice acting complements Johnson’s charisma as Maui through characters’ bickering and bantering.

From casting to research, it is clear that the creators of Moana have refined each step of their movie-making process to create an entertaining and breakthrough film. Contributors paid an immense amount of attention to the details of the Polynesian life from which the movie takes influence. This complete emphasis on cultural accuracy was executed through animating correctly placed tattoos as well as casting actors from Pacific Islander descent.

Though the film is unique in its addressing of ecological and gender issues, the plot follows the formula of any other princess movie. The character Maui even points out that “If you wear a dress and have an animal sidekick, you’re a princess.” Moana’s entire voyage isn’t laced with any surprises; it is simply predictable and generalized with a lack of character development. Her animal sidekick chicken is even comparable to the loon named Becky from Pixar’s Finding Dory.

Fortunately, the film’s captivating soundtrack and score stands alone as its own musical spectacle. Directors Ron Clements and John Musker’s choice to bring in a Broadway star led them to In the Heights and Hamilton creator Lin-Manuel Miranda as co-composer. Miranda’s songs ‘We Know the Way’ and ‘Shiny’ give Moana the energy and emotion it needs at blander plot points.

Moana is an immediate Disney classic with its heartfelt and delightful story that will appeal to audiences of all ages. The film’s individuality as a culturally aware film aligned with its essential Disney-brand magic establishes it as proof that progress and classics can go hand-in-hand, especially for an honorary princess.