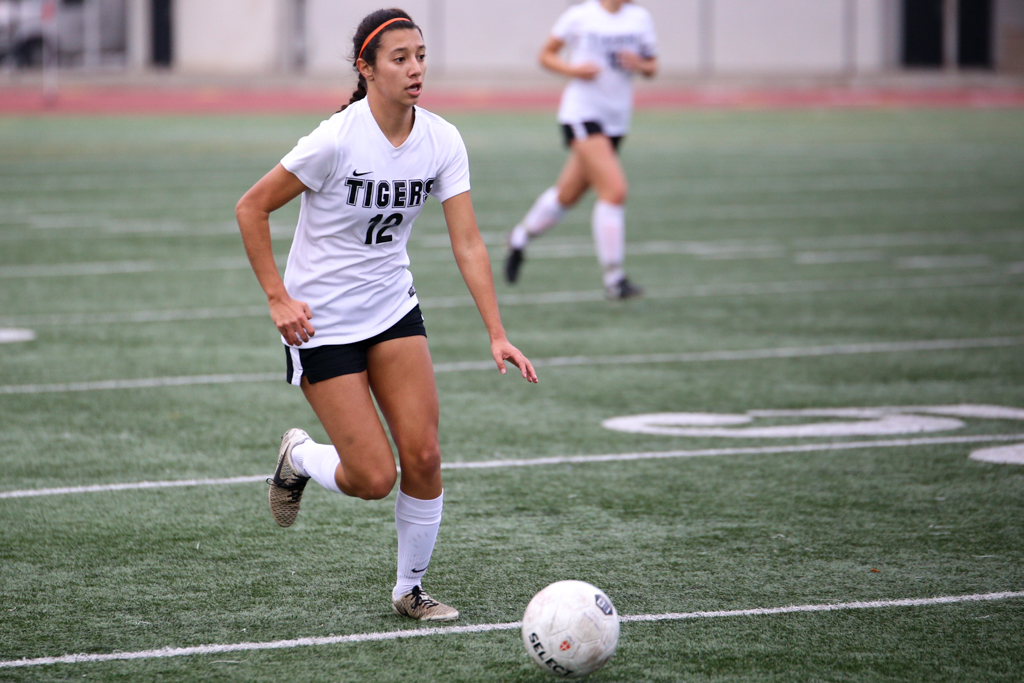 In its most intense matchup of the season, the girls’ varsity soccer team shook and shuttered the San Marino Titans in a close 2-1 win on Friday, February 7. The Titans came in ravenous for the kill, looking to settle their loss against South Pas back in January. But in this second contest against their historic rivals, the Tigers’ rock solid defense in tandem with bold and beautiful plays by key players landed them a shining victory. South Pas’ success puts its overall season record at 7-5-3 and its league record at 3-1-3, as well as situating the girls in CIF contention.

As the Tigers plunged into their second to last game of the year, it was clear that they had truly come into their own. They were not separate players playing for an average soccer team; rather, each Tiger was a cog in what has become a powerful and well-oiled machine. Leading the frontline were sophomore midfielders Uma Hornish and Rainey Tilley along with freshman midfielder Corey Segal. While sophomore defender Alyssa Bonk bolted up and down the midline, senior defenders Sara Jaime and Amelia De Young embodied the ever exceptional Tiger defense. And, almost like a secret weapon, junior defender Riley Segal took every free ball granted to South Pas and unleashed her unforgiving yet authoritative kick that elevated the team to a higher tier of excellence.

The synchronized quality of the squad allowed the Tigers to immediately outmaneuver and pass around the Titans, digging deep into Titan territory. Although San Marino was bringing its best effort, they simply could not compete with the Tigers’ efficient plays. Hornish, Tilley, and C. Segal relentlessly cut through the San Marino barrier, calibrating shot after shot on goal. Tilley herself took an early chance five minutes into the game, and junior forward Harper Fox fired the ball which whizzed past the side of the goal. Perhaps the one Tiger shortcoming during the match was their failure to capitalize on goals, despite their expertise in setting them up.

Senior forward Jayda Weeks’ late-half performance accurately encapsulated the Tigers’ emotion, considering their lack of goals as they neared halftime. One could visibly see the fire in Weeks, as she showcased her greatest work, fighting for the ball with all the heart she could muster. Although the half came to a scary end with a narrow save by junior goalkeeper Sophie Reynolds, that inferno that Weeks had personified would carry the Tigers strong into the following period.

The Titans came into the second half with a lot of desire themselves, breaking through Tiger defenders and securing multiple shots on goal. Yet their endeavors only fanned the flame within South Pas– sophomore goalkeeper Noemi Howland skillfully blocked the strikes while the Tiger offense re-found their footing and turned over possession.

Then, fifteen minutes in, the Tigers were bestowed a perfect opportunity. The aforementioned R. Segal would take a free kick at the thirty yard line and let loose one of the most beautiful shots of all season, arching flawlessly over the opposition and directly into the net. For a moment, the girls stood in awe; pure ecstasy followed as they realized their triumph.

But their happiness was only momentary. Soon after, a serious injury on Jaime would reveal the breakneck nature of the match– the Titans were not going to lose without a vicious brawl. Flustered from their player deficit, the Tigers allowed San Marino to gain more goal attempts. With four minutes left in the match, a Titan cleanly headed in a corner kick and disrupted the South Pas lead.

“I was heartbroken after that San Marino goal– even though I know it’s a team effort, I felt like I had contributed to their goal,” said C. Segal.

But, in a moment straight out of a movie, the tides suddenly shifted. An over-confident Titan defense did not and probably could not have expected what C. Segal would do next. Off of a punt from Howland, C. Segal brought the ball all the way to the opposite side, juked the goalie, and launched a hopeful kick to the net.

“I saw that opportunity, I was super driven and determined to get back at San Marino,” said C. Segal.

“Once I got the ball past that last defender and I had the open field… it was crazy! I couldn’t believe that was happening, and I saw the keeper and thought, ‘I just have to get it around her.’ And I took that one touch and shot the ball, falling down as I did. But when I heard the cheers around me I knew that we had got the goal.”

The shot that she had fired had found its mark, and secured South Pas its win. With a minute left, the Titans frantically tried to recover in vain– and the Tigers only further asserted their dominance.

“The way we’ve developed our program is that we’re peaking at just the right time. At the end of the day, other teams that have been riding high all season don’t truly have the advantage– it comes down to who has that last bit of grit and character left,” commented head coach Victoria Lathrop. “Again, all season we’ve worked on keeping our composure and focus, the factors that make epic games. This game represented the girls’ pure grit, pure want, and pure pride in what they stand for– a game that the girls will remember forever.”

The ecstatic girls seem to have destiny looming in front of them. They will play their last league match against the La Cañada Spartans at home on Thursday, February 9; the Tigers will use their unstoppable momentum to leave destruction in their wake and seize a CIF berth.